Blogtour: Once Upon a Rainbow, Volume Two by various authors

Title:  Once Upon a Rainbow, Volume Two


Your favorite stories from childhood have a new twist. Eight fairy tales of old with characters across the LGBTQIA+ spectrum.

Coming Home by Jennifer Cosgrove – No one ever expects to be Prince Charming.

At Her Service by K.S. Trenten – Dancing to her true desire.

Shattered Glass by Lina Langley – The resistance was never ready for this.

Finding Aurora by Rebecca Langham – Setting out to save the sleeping princess does not go as planned.

Master Thief by Sita Bethel – He became the greatest thief in the world so he could steal his squire’s heart.

The True Love Curse by Tray Ellis – True Love would be wonderful, but the curse keeps getting in the way.

Scott Prince has everything, but it doesn’t mean that he enjoys all the responsibilities that come with it. It is, at times, a lonely life. But things start looking up one evening when, at an obligatory social event, he meets a handsome man while stepping out for some air.

But then the man disappears. Scott and Molly, his best friend, find him again in a very unexpected place, and the mystery deepens. A tale of an evil stepmother and horrid stepsisters versus a man who is fiercely independent, and a Prince that will do whatever he can to help him escape his situation and come home.

Working at a fast food chain and photo blogging about her transition, Rosa Nieves, known to the internet as “Snow Fox,” is just trying to pay for nursing school. But when her photos go viral, Queen E can’t tolerate the idea that there is a badder bitch than herself, and sets out to murder Snow Fox. Can Rosa survive the wrath of a jealous, rich bitch with an enchanted smartphone? Or will one woman’s vanity be her doom?

Prince Ivan has never been particularly good at being a Prince, so when he comes to rescue his wife from the evil wizard, he ends up offering himself in her place. Vanya soon learns that, while Alex may be an evil wizard, he’s a hell of a whole lot more. But the Prince kills the evil wizard, right? There’s no way the Prince and the Evil Wizard could love each other instead? Sometimes, love means writing your own happy ending.


At Her Service by K.S. Trenten

Cinders would much rather fondle her mistress’s bony feet than go to a ball. Magic whisks her away, in spite of herself to a night of lights, dancing, and mystery where she discovers her true heart’s desire. For nothing is what it seems where enchantment, fairy godmothers, and princes are concerned.

Kai Axelsson is on the most dangerous mission of his life.

A timely twist of fate. A clever deception. And suddenly he’s found himself a place among the staff at Sandheim Palace, entrenched among the people bound to serve a despotic queen. Kai’s only job is to feed the propaganda machine while staying out of sight–yet when he catches the attention of the queen’s brother, what began as an information gathering mission becomes a battle for Kai’s very soul.

Powerful. Magnetic. Immortal. With a breath of frost and a sliver of glass, the crown prince Alexander weaves his spell around Kai, intent to claim him forever and draw him into the darkness of their world. Yet where Alexander’s heart is made of ice…it’s the fire in Johann’s that could be the key to bringing Kai home.

Johann never wanted to let Kai go on this mission. And now a fatal misstep could mean losing the only man he’s ever loved. Only Johann can break the spell entangling Kai’s heart in thorns of darkest glass.

Before the dark prince’s corruption claims him completely, and Kai is lost forever.

Aurora Rose slumbers in the city of Oldpass, a cursed kingdom once allied with Grimvein. She is powerless to control her own fate. At least, that’s how the story goes.

Now, as Grimvein faces attack, Prince Amir has been tasked with the life-threatening rescue of Aurora, his parents hopeful that he will marry the princess and secure safety for their kingdom. Talia, the strongest spellcaster in the known lands, protects and guides the prince in his quest to save a woman that threatens to change their lives forever. In finding Aurora, the pair will realise the truth about themselves and each other, coming to understand just what – and who – they really want in life.

Tyv grew up hungry and cold in a shack boarding the property of a noble family. His father could never provide enough food, clothing, or warm shelter, but there was one important thing he gave to his sons- the choice to go find their own destinies.

Widow Clara Hammond doesn’t have time to worry about misfortune befalling the royal family when she has a house to repair and stepsons to feed, but on her way through the forest she encounters Queen Almarine. The queen is searching for a cure for her ill son, Prince Roald, and Clara can’t refuse helping her. The more time they spend together, the more Clara likes Almarine, and the more it seems that Almarine likes her back.

Henryk Hammond is struggling to finish his law degree when the whole university is shut down in a city-wide search for a solution to Prince Roald’s illness. While waiting in the long line to offer his own meager knowledge an old woman gives him a magical cloak and gains him audience with the Prince. Henryk’s watchful night takes him on a wild ride of dancing and feasting as he follows the Prince out of the palace. As morning arrives, Henryk realizes that to save the Prince they’ll have to confront the enchantress together. There’s only one way up the tower to the witch’s lair, but Henryk is determined to end the curse. 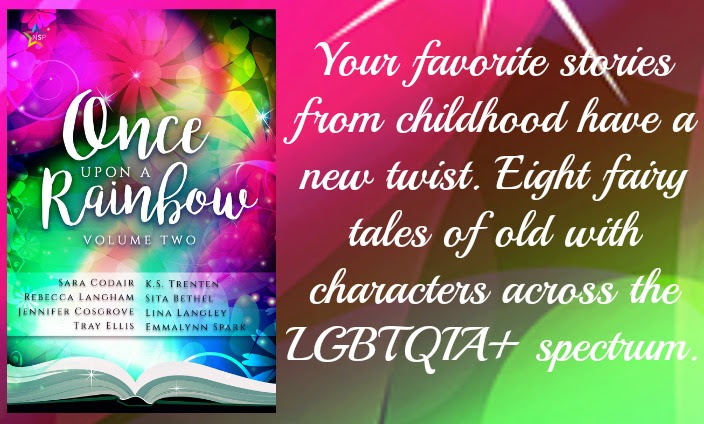