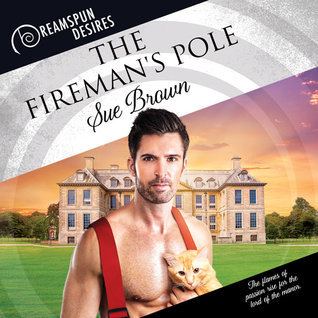 
The flames of passion rise for the lord of the manor.

It’s springtime in Calminster village, but things are already heating up. Sexy firefighter Dale Maloney is new to the local station. When Dale backs the company fire engine into the village maypole, he attracts the ire—and attention—of Benedict Raleigh, the Baron Calminster.

Soon after meeting Dale, Ben breaks off his relationship with his girlfriend, and the sparks between Ben and Dale are quickly fanned into flames.

Unfortunately the passion between the two men isn’t the only blaze in the village. An arsonist’s crimes are escalating, and it’s up to Dale and his crew to stop them. Meanwhile, as they investigate, an unscrupulous business partner attempts to coerce Ben into marrying his daughter. The May Day parade is around the corner, but they have plenty of fires to put out before Ben can finally slide down the fireman’s pole.

I mean let's talk about the elephant in the room...or in this case 'The Fireman's Pole', best book title. I admit it any book with a title that makes me blush and giggle like a twelve year old is totally ok with me.

'The Fireman's Pole' really is a fun and fluffy story about Dale Maloney the newest addition to the Calminster Fire Department and Benedict 'Ben' Raleigh, the Baron Calminster.  Shortly after they meet Ben ends his relationship with his 'girlfriend' and the sparks between Ben and Dale ignite into a full scale fire. Unfortunately it's not the only fire in town as someone's been setting fires around town and there's also the whole incident of a certain fire truck hitting a maypole.

As if this isn't enough Ben's has an unscrupulous business partner trying to take control of his company and he's not going to stop just because he failed to get Ben to marry his daughter. A daughter that quite honestly everyone seems to have underestimated...this one's feisty and business savvy...oh hell, let's not lie here when it came to business this lady was a barracuda and even though he didn't want to marry her, Ben was pretty sure that when it came to business he wanted her in his corner.


From start to finish there's a lot about this story that's both unlikely and improbable but it's also just a lot of light fluffy fun. Filled with awkward moments, humorous disagreements and one of the busiest small town fire departments I ever remember coming across, 'The Fireman's Pole' is a cute modern day fairy tale. It's what happens when Cinderella (Dale only instead of the evils steps, he's got an evil ex)  gets mashed up with Beauty and the Beast (Ben until Dale broke the spell he was under... complacency)  and someone throws in a bit of dash of Sleeping Beauty for good measure (there's a fairy godmother in here masquerading as a sweet elderly housekeeper/cook) and of course there's a villain or two because really what's a good fairy tale without a villain or two?

This is the second book narrated by Finn Sterling that I've listened to and while the first one was just ok, not all of the voices worked for me, things definitely went better with this audio book and I enjoyed the voices that were given to these characters and the fact that they were unique, consistent and expressive...ticking off that basic check list of what I look for in an audio book quite nicely.

I was looking for a story that was just a bit of cute filled with fun  and fluff when I listened to this book and it was. I smiled and chuckled my way through this adorable British romance and I have to admit this is one that for me was definitely more enjoyable as an audio book than it would have been to read.

An audio book of 'The Fireman's Pole' was graciously provided by the publisher in exchange for an honest review.