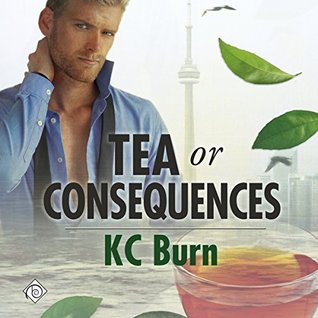 Maybe Riley isn’t living up to his full potential, but being a temp executive assistant suits him. He’s never bored at work, he’s got friends who let him geek out, and he’s got a carefully crafted twink exterior… which might be getting constrictive now that he’s on the other side of thirty. Life isn’t perfect, but it’s comfortable.

It all unravels when he takes a job working for a tea-obsessed cosmetics queen, the owner of Gautier Cosmetics. During the launch party for a new product, Riley finds his boss dead under suspicious circumstances, and the homicide detective is none other than Tadeo Martin, Riley’s high school obsession who never knew he was alive.

Tad drafts Riley to get the scoop on the inner workings of Gautier, and for Riley, it’s like a drug. His natural inquisitiveness is rewarded with more and more Tad. Unfortunately, his snooping puts him in the running for two other roles: suspect and victim. The killer doesn’t care which.

'Tea or Consequences' is a fun mystery with a side of romance and I really enjoyed this one. Set in the city of Toronto...you guessed it!!! CANADA!!!! Ok, that's my squee, I'll try and keep my inner geek under control from here.

Riley works for a temp agency as an executive assistant. He loves the challenge of what he does and the newness of working for someone different all the time and he's really good at what he does. So good that his latest position working for Gabrielle the cosmetics queen of Gautier Cosmetics lets him know that in no uncertain terms she wanted to keep him as her PA.

Everything's going really well for Riley...right up until his boss turns up dead and his high school crush turns up as one of the lead investigators on the case...Riley's well ordered life is suddenly thrown into chaos as he and Tad work together to figure out who wanted Gabrielle dead because there's no shortage of suspects with this case.

I liked the character of Riley. To say the least he's someone who's organized and efficient. You can't be a good PA much less a good temp PA and not have those qualities nailed down but I think what I love the most about this character is that he's representative of so many people who have found what they want to do in life and are doing it because it makes them happy and their lives are fulfilled not because they're meeting everyone else's expectations but they're meeting they're own and doing what makes them feel happy, successful and fulfilled.

Tad was a little harder to get a grasp on because for most of the story it wasn't clear whether or not Tad remembered who Riley was. Tad was also frustrating because of his reluctance to be in a relationship with Riley, not because he didn't want to be with Riley...in fact it more like the opposite Tad definitely wants to be with Riley but for him it's a conflict of interest in regards to his job and at the same time it also felt like he was using Riley to get information that he wouldn't have otherwise had access to for his case. The bottom line is that Tad may be trying hard to do what's right it's not without a price to both his and Riley's happiness.


As much as I enjoyed this story I do have to admit that it required a big suspension of belief when it came to some of what happened in this story. I'm not going to go into the details but let's just say in regards to the police procedures...it's FICTION!!! And this one really was built on that premise. In general this was a really entertaining story and I think a lot of that was due to the fact that the author didn't try to adhere to police procedures and it allowed them to use Riley in a more active role for the mystery part of the story and I mean more active as in...I'm not sure how the police would have solved this without him. This also facilitated Riley and Tad's relationship progressing as well.

The romance in this one was definitely a secondary factor in this story but at the same time it never got lost from the story...it just took a bit of a back seat at times but the connection was always maintained allowing the romance and the mystery to transition back and forth in terms of priority.

Darcy Stark was the narrator for this story and while he's not a new narrator...he's a new to me narrator and one that I think I need to check out a little more because based on this audio book, he's a narrator that I'm going to enjoy. His voices were unique, expressive and consistent. He added depth to the characters and the story making for a very enjoyable listening experience and story.

An audio book of 'Tea or Consequences' was graciously provided by the publisher in exchange for an honest review.