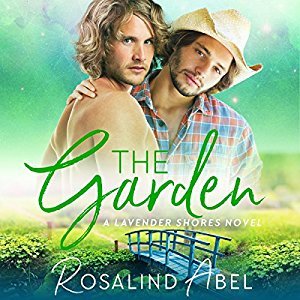 
Beautiful Gilbert Bryant designs jewelry for the rich and famous, and he made his escape from his gossipy little hometown of Lavender Shores. However, with so many friends and family, he keeps getting pulled back. When he attends his best friend’s engagement party, Gilbert can’t help but sample one of the new men in town. It’s just some innocent—or not so innocent—fun. Nothing that will even cross his mind once he gets back to his everyday life.

Walden Thompson dreamed about living in Lavender Shores since he visited as a child. He finally gets his chance, and he embraces the opportunity to start over, to become someone new. He leaves both hurts and dangerous habits in the past, where they belong. When Gilbert crosses his path, Walden gives in to his baser instincts. He can indulge in the carnal pleasures this once and still be okay.

Their few hours together haunt Gilbert, the two-hundred-mile buffer from home no longer shutting out the past or the sexy man he left behind. Walden is just beginning to recover from the smoldering encounter with Gilbert when they are thrust together once more. This time, neither of them can walk away, no matter how hard they try. But when their pasts crash into each other as surely as the magnetism that pulls them together, walking away may be the only option.

This garden is definitely coming into bloom...

'The Garden' is the second book in Rosalind Abel's series 'Lavender Shores' and I have to say this one worked much better for me than 'The Palisade'. We first met Gilbert Brayant in 'The Palisade' as the best friend of MC Andrew Kelly and while this book can easily be read without having read that book I have to admit I enjoyed having the background of the first book before going into this one.

Gilbert may be a member of one of Lavender Shores founding families but for him Lavender Shores isn't the idealistic little town that others seem to find it. But when that's where your family lives it's hard to cut all ties so he's found a compromise he's made his home base just a short commute away and when family obligations demand it he makes the trip back to Lavender Shores only to escape back to his sanctuary as soon as he can.

Walden Thompson has escaped to Lavender Shores following a disastrous ending to a bad relationship.  Every since he'd visited Lavender Shores as a child, Walden had dreamed of living there.

Gilbert and Walden both have things in their past that they regret...mistakes that haunt them still and neither man wants a relationship again. Nor does either of them count on the strength of their attraction to each other and how perfectly they fit together when it comes to their sexual proclivities and let me just say these two clicked in the bedroom...they were hot...smokin', sizzling hot and add in Gilbert and his 'do you kiss your momma' with that mouth?' dirty talk and well I seriously considered reading this outside and folks I live in Canada our temps are in the 'who needs a freezer range'...need I say more?


Following what's suppose to be a one time encounter both men are very aware of how well they fit sexually and are equally determined to keep their distance from each other but Karma well...she's got other plans and she's determined to make sure their paths keep cross whether they want it or not.

I really liked Gilbert. His humor and snark were right up my alley and had me laughing out loud more than once and while Walden was so open and honest at times he was also quiet and reserved but neither man was totally what they appeared to be and each man had things they were more than a little hesitant to share with anyone.

For Gilbert and Walden the road to love and happiness has more than a few twist and turns in it. I really enjoyed the journey as these two got to know each other slowly sharing their secrets and their hearts as their relationship went from sexual attraction to a tenuous friendship to two men in love. It took time and effort from both of them before they finally got to a point where they could both admit the wanted more...they wanted to be together and have a relationship.

While events from the first book really didn't impact the plot on this one it was nice to be familiar with a lot of the secondary characters in this story especially since Andrew and Joel showed up a fair bit, but if you haven't read the first book 'The Garden' gives enough background to keep the reader from feeling lost.

Once again Kirt Graves was the narrator for this audio book and once again he delivered a solid narration the kept me engaged and delivered a very enjoyable audio book experience. 'The Garden' is not my first audio book by this narrator for that matter neither is 'The Palisade', no this is actually my fourth audiobook narrated by Kirt Graves and I've enjoyed his narration on each one of them and I'm hoping to enjoy more in the future...specifically I'd love to listen to more of the 'Lavender Shores' series narrated by Mr. Graves. He adds depth and dimension to the story bringing it to life and allowing me to enjoy the story all the more for having listened to it on audio.

While this series only got off to an ok start for me...this book has changed that and definitely has me on board for future stories about the residents of 'Lavender Shores, but I have to admit...I've enjoyed listening to these on audio and I'm planning on continuing with this format so please...dear author can we have more on audio...soonish, please?

An audio book of 'The Garden' was graciously provided by the author in exchange for an honest review.