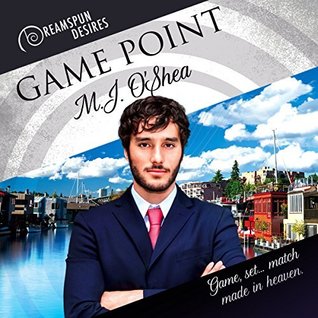 
Game, set… match made in heaven.

Spoiled socialite Quinn Valenzuela has no interest in sports or his family’s huge sporting goods empire, Sparta Athletics. So when Quinn learns his grandfather has died and he’s in control of the corporation, no one is more surprised than Quinn himself.

Dedicated COO Porter Davis has little time and less patience for brats like Quinn who have never done a day’s work, but circumstances leave him with little choice. Quinn claims he’s ready to leave partying behind and grow up, but it’ll take more than words to earn Porter’s respect. As it turns out, they can work—and play—together after all. A friends with benefits arrangement makes sense for the two busy men, but are they too different for it to ever develop into more? Not if Quinn can convince Porter he has his head in the game.

It's been a while since I've read a book by M.J. O'Shea so when the opportunity to review this one came up I was more than happy to give it a go. I'm always enjoyed books by this author and 'Game Point' has turned out to be no different.

Quinn Valenzuala is a trust fund  baby. He leads the jet set life. Never staying in one place for to long until he jets off with his friends Hunter and Dane to the next party. He's foot loose and fancy free and has no interest in changing this. But when Quinn's mother calls him home with the news that his grandfather has died. Quinn begins to wonder if maybe it's not time for a change.

Porter Davis is the COO of the sporting goods company that Quinn's family owns a company that his grandfather has poured his heart and soul into and one that Porter had assumed would be passed on to Quinn's mother and not the jetsetting playboy that Porter would prefer go back to his carefree lifestyle and leave the running of Sparta Athletics to those more qualified.

When Quinn returns home he realizes that he's missed his mother and his home...that maybe it's time for him to put down some roots and accept that task that his grandfather has charged him with.

'Game Point' is truly an enemies to lovers story. Porter's determined not to like or give Quinn a chance. Quinn becomes equally as determined to make it work and become a business person his grandfather would be proud of and to prove to Porter that he's more than just a playboy with no real purpose in life.


Little by little Quinn changes Porter's mind showing Porter that not only can he do the job but Porter can count on him when he needs too and not just in the boardroom...nope, Quinn and Porter discover that they like each other and they becomes friends...very, very good friends with benefits. Which is all well and good until Porter realizes that what he feels for Quinn is a whole lot stronger.

This ones a slow burn...very, very slow and that works because these men have to get over the deaths of someone they both care about very much and adjust to the changes that brings to both their lives before they can even begin to get to the process of learning about each other, getting to know each other but get to know each other they do and things progress from friendship to friends with benefits in due course.

I like how Quinn and Porter balance each other. While Quinn wants to learn about his grandfather's company and actually contribute to it's operations he also adds a lighter side to Porter's life getting him to do something besides work when Quinn accepts his offer of friendship and the two men begin to spend time together outside of the office. At the same time Porter brings balance to Quinn allowing him to see that there's more to life than being a playboy and that life can be enjoyed and appreciated even if it's not all just one big party.

Quinn and Porter are not just good together...they're good for each other and the only thing that I would have changed about this story if I could would have been to make the ending a bit longer...maybe, an epilogue showing them a few months down the road...sharing their first Christmas...but maybe it's just the time of year making me think this.

An audio book of 'Game Point' was graciously provided by the publisher in exchange for an honest review.