Review Tour: On The Third Kiss by George Loveland 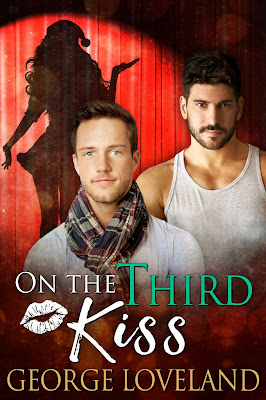 Sebastian Bennett is really looking forward to his Christmas holiday with boyfriend Elliot Bolton in the Gran Canarian sun. The only thing left is for him to sing one last song at the pub as his Drag Queen alter-ego, Donna Tracey. After the wig, make-up and dress come off, he rushes home to pack, only to find he and his chihuahua, Buster, have been deserted by Elliot, who’s taken someone else to Gran Canaria. Devastated, Elliot turns to his friend and the pub’s manager, Javier Reyes-Martinez, who helps him pick up the pieces.

Javier seems determined to bring fun and laughter back into Sebastian’s life during this holiday season, and Sebastian is both grateful and enchanted. After a family Christmas and a word of advice from his great-uncle, Sebastian starts to look at Javier in a different light. Is Javier as fond of Sebastian as he appears, or is Sebastian being misled by his own need? If he’s reading the signs right—and if he’s ready to move on from his previous heartbreak—could he and Javier be much more than friends?

As Donna Tracey, Drag Queen extraordinaire, Sebastian Bennett works hard, and he’s looking forward to a well deserved vacation with his boyfriend and the love of his life, Elliot Bolton, on the Gran Canaria, or at least he thought he was until he came home to find Buster his chihuahua alone with nothing but a note telling him that Elliot needed a break and was going on their vacation with someone else…which this is bad enough, right? But no, Elliot didn’t stop there. Needless to say, Sebastian is devastated…hell, I was devastated with him.
Feeling like his world is crumbling Sebastian turns to the one person he can rely on, pub manager and friend, Javier Reyes-Martinez. Javier doesn’t hesitate to step-up, offering Sebastian support, friendship, a shoulder to lean on…whatever he needs.
When Christmas day rolls around and Sebastian decides that if he’s not going to be on Gran Canaria, he might as well go home to his family, he doesn’t hesitate to take Javier with him, and it’s in the midst of a broken heart and being with his family who mean the world to him that Sebastian begins to realize that maybe Javier could be more than a friend…maybe, he’s what Sebastian really needs in his life.


I loved how things played out between Sebastian and Javier. Now, don’t get me wrong; I’m not saying that Seb was slow on the uptake but it did take his mother, his sister, his uncle with dementia…no seriously, Seb’s uncle had some surprising moments of lucidness and imparted so pretty good words of wisdom, and then there was Buster…that was one seriously smart chihuahua with really good taste in men, and there might have been a few other people dropping hints before darling Seb finally got a clue but in his defense…douchebag boyfriend…screwed him over…so he might not have been seeing things as clearly as he should have.
On the flip side, Javier may have known how he felt about Seb but he also cared about him enough not to push. He knew that Seb was a bit of an emotional wreck, and he wanted to give him some time and space.
‘On the Third Kiss’ was a sweet holiday, friends to lovers story by a new to me author, whom I’m looking forward to reading more from in the future.

An ARC of ‘On the Third Kiss’ was graciously provided by Signal Boost Promotions in exchange for an honest review as part of this tour.