Blogtour: A Tangle Of Secrets by R.G. Thomas

A Tangle Of Secrets

The Town Of Superstition #4 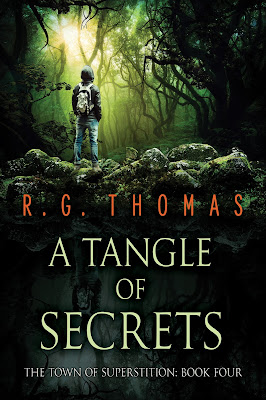 Following the conclusion of his greatest adventure, Thaddeus Cane’s life is changing once again. He is finally reunited with his mother—and dealing with her dangerous new powers—and about to start the year at yet another new school. While he contends with making new friends and facing the school bully, Thaddeus’s boyfriend, garden gnome Teofil, spends his time locked in Leopold’s study, reading through the late wizard’s journals for any clues that might lead them to Lucian—Thaddeus’s murderous uncle—or finally give the Rhododendron family some answers about the fate of Teofil’s brother.

As his troubles at home and school mount, Thaddeus’s mood grows dark and he retreats from all those who have supported him in the past. Just when he thinks things can’t get any worse, the Bearagon returns to threaten not only Thaddeus and those he loves, but his new school acquaintances as well. This confrontation brings to light the last secrets from Thaddeus’s past, more than one shocking revelation—and more than one enemy.


A boy with wide shoulders stood in the middle of the hallway. Students flowed to either side of him like water around an immovable stone. The boy was handsome with short blond hair, blue eyes, and a big, bright smile. A tight-fitting polo shirt flaunted his strong arms. He was talking to a pretty girl with her brown hair pulled back into a ponytail. She laughed at something the boy said and put a hand on his chest, directly over his heart. They looked like an advertisement for homecoming king and queen. Another stocky boy walked past and called out, “Hey, Dixon! Hey, Joy!”
“Dude!” Dixon shouted back, giving the boy a high five as Joy shook her head and smiled.
Thaddeus rolled his eyes and moved into the flow of kids going around the couple. A strong hand suddenly landed on his shoulder, stopping him in his tracks. Before Thaddeus could even turn his head to see who had grabbed him, he was pushed up against the lockers. A shadow fell over him, and he grimaced as his right shoulder was pressed hard against the metal locker and the hand tightened on his left.
“Did I see you roll your eyes?”
Looking up into Dixon’s cold blue eyes, Thaddeus wondered why every bully in every school he had attended looked the same. Did they come out of some weird duplicating machine?
“What?” Thaddeus asked.
Fingers tightened on his shoulder. “You heard me, new-kid freak.”
“If I did roll my eyes, it wasn’t about you.” Thaddeus stared back at Dixon without flinching, no matter how much his shoulders hurt. He fought to keep in check the warm magic that wanted to flow through and out of him to toss the boy across the hall. Un-gifteds weren’t aware of the magical beings that lived among them, and Thaddeus didn’t want to be the one who revealed the well-kept secret.
“Dixon, come on,” said Dixon’s pretty girlfriend, Joy. “Don’t get in trouble on our first day.”
“Yeah, asswipe, get to stepping,” said a boy who had stopped to watch. “How would a suspension look when you apply for football scholarships?”
“What did you say to me?” Dixon asked as he stared at the boy and continued to press Thaddeus against the locker. “Joy, did you hear this little shit talk back to me?”


“Dixon, come on,” Joy said. “Leave these fags alone before Winslow makes one of his patrols.”
The boy who had challenged Dixon widened his eyes and laughed. “Fags?” He looked at Thaddeus. “Is that one of the most lazy insults you’ve ever heard?”
Dixon pointed at the boy who had challenged him. “I catch you outside school, you’re dead.” He then leaned in closer to Thaddeus. “Watch your attitude, new kid.” He pushed himself off Thaddeus’s shoulder with a hard shove and turned to wade through the students who had gathered to watch. Many of them put their smartphones back in their pockets, looking disappointed there hadn’t been a fight they could capture on video and post all over social media.
“Thanks for saying something,” Thaddeus said as he rubbed his shoulder where he could still feel the pressure of Dixon’s fingers. “You didn’t have to do that, though.”
The boy shrugged. “No problem. Us normal-sized guys have to stick together, am I right?” He grinned, displaying a narrow gap in his front teeth. He had curly red hair, a galaxy of freckles across his nose and cheeks, and dark brown eyes. “Anyway, that’s my locker he had you up against.”
“Oh.” Thaddeus stepped away from the locker and turned away. “Sorry.”
“No problem. You’re new here too?” the boy asked as he stepped up to his locker.
Thaddeus gave him a quick smile. “Yeah. You are too?”
“That I am,” the boy said, then stuck out his hand. “Andy Harkin.”


A History of Bullies
Guest post
Bullies come in every shape, size, and gender, and can be found in the majority of schools. When I was in school during those preppy-colored, Izod alligator days of the early 1980s, I became acquainted with a couple of bullies. Both were upperclassmen, and both made a point to call me names in front of their peers and my friends. I was one of the luckier kids though, because name-calling and ridicule were as far as things went; I was never physically harmed.
In my newly released book, A Tangle of Secrets: The Town of Superstition Book Four, the main character, Thaddeus Cane, has been through a very emotional summer since moving to the small town of Superstition in The Midnight Gardener: The Town of Superstition Book One. Many of the questions that have gone unanswered all his life have been resolved, and he's met Teofil, his boyfriend who's just as lonely and magical as Thaddeus himself. While the summer has brought about a change within Thaddeus, and he has confronted truly evil people and creatures, there remain more tests and a few mysteries waiting to be solved. Thaddeus is a young wizard in the very early stages of figuring out his abilities, but he is also an awkward and emotional teenager, and these two sides collide in the latest book of the series.
Dixon Praise is the bully at Superstition High who gives Thaddeus grief. A star of the football team with a cheerleader girlfriend, Dixon is the epitome of popular as well as a bully. On the very first day of school, Dixon calls Thaddeus out for rolling his eyes, a scene very similar to an incident that happened to me when I was in high school. Instead of rolling my eyes, however, I gave my bully a dirty look when he shot a rubber band at me, and he then proceeded to chase me through the halls. I escaped up a stairwell, but was nervous walking around the halls the rest of that week. Sometimes a writer needs to pull directly from his or her actual life to make a scene more realistic and bring a bit of closure to the past.
As Dixon's bullying escalates, Thaddeus struggles to keep his magical powers in check. It would be easy for him to defeat Dixon by use of magic, but doing so would risk exposing the truth about himself, his family, and even Teofil. So as Thaddeus tries to handle Dixon's taunts and challenges without resorting to magic, he becomes more and more frustrated, which leads to his acting out at home.
Thaddeus's magical home life and his normal teenage school life collide in a dangerous showdown that forces his hand and could bring about a reckoning within the town of Superstition.

R. G. Thomas has been reading books from an early age. As a young gay man, however, he found very few characters with whom he could truly identify. Now that he's an adult—or at least older than he used to be—he likes to write stories that revolve around gay characters. The Town of Superstition is his YA fantasy gay romance series which includes wizards, witches, and other magical creatures.

When he's not writing, R. G. Thomas loves to read, go to movies, watch some TV, and putter around in the small suburban patch of ground he calls a yard. He visits his mother once a week, not just for the free cookies, and enjoys spending time with close friends drinking wine and making up ridiculous things that sometimes show up in his books. Although he hates the process of travel, he does enjoy experiencing new places. His dream trip is to one day visit the country of Greece, and he is currently saving his nickels and dimes to make that a reality.

Twenty years ago he met a man who understood and encouraged his strange, creative mind, who made him laugh more often and more freely than anyone else. They were officially married in November of 2015 and today they still laugh often as they live in a suburb just north of Detroit with their two cats who act as both muse and distraction to him while he writes.