Blogtour: Getting His Man by B.G. Thomas

Holiday Greetings to all of you at My Fiction Nook! I am so happy to be here in what I always feel is a home away from home. Now for those of you who don’t know me, my name is BG Thomas (not BJ). However, my friends call me Ben. I’m hoping you will too.

I am here to tell you about my new book, “Getting His Man”. It’s been awhile since I’ve had a new book, and of course what happens is that I have two books coming out this month, both of which are very, very different. “Getting His Man” is a novel which is a part of the Dreamspun Desires line from Dreamspinner Press which is being release today!

Now for those of you who do know my stories, you are aware that in most of my books, my heroes can have a tough row to hoe before they get their Happily Ever Afters (although they always get their happy endings). But as part of the Dreamspun Desires stories, this book is pure fun. And therefore, this book was very fun to write!

Now this book came from a number of influences and inspirations, The first one—and this makes me very happy—was my husband. He was the one that said to me, “Hey baby, have you ever considered writing a book about a bounty hunter going after a guy and then they fall in love?”

Well let me tell you I sat up straight in my chair and my eyes went wide. A bounty hunter? Oh my!

“I was watching this episode of Quantum Leap where Scott Bakula had to go after this woman who had jumped her bail and it was hilarious and I kept thinking how this might be just what you were looking for. It would make a great gay love story.”

So I watched it and laughed and laughed and I knew he was right. I quickly contacted Dreamspinner and told them about this story I had in mind where the bounty hunter has to go after his man and the guy keeps escaping in one hilarious misadventure after another before he finally got his man—and they fell in love. I got the go-ahead and off I went!

Except that something happened that often happens to us authors who don’t (or can’t) outline and who write by the seat of their pants. The characters took me in a whole different adventure—i.e. roller coaster ride!—and what happened instead was a story that I think is no less fun, and a whole lot sweeter and romantic. As the cover says, it is a “story worthy of an old movie. With a twist.” Because both my heroes—Artie and August—love old romantic movies. Except one of them always dreamed of being the hero and, thankfully, the other dreamed of being the “damsel in distress.”

Lad in distress! Yes! That’s it! In “Getting His Man”, Artie is a “lad in distress” and August Sterling is going to be his hero. And maybe, just maybe, they will tango into love.

Here is the cover and blurb.... 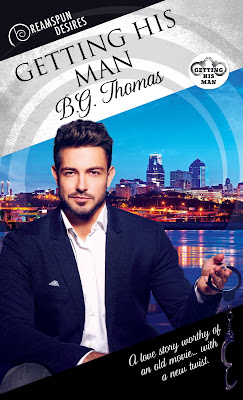 A love story worthy of an old movie... with a new twist.

Artie needs a hero, a man like those he’s always revered in Golden Age films. His drug-dealing jerk of a roommate got him arrested, and since his savior isn’t likely to sweep in and save the day, Artie calls a bail bondsman.

August has always imagined himself a hero from a black-and-white movie, but he’s never found a man willing to let him play that role—at least not until he gets the call from Artie.
Both of their dreams might come true, but not before August must use his skills as a bounty hunter as well as a bondsman. Artie is on the run for his life, and August must protect him and help him clear his name. Only then can they both finally get their man.

Important set up! Artie’s awful roommate fed him a brownie right before all hell breaks loose. A marijuana brownie! Artie doesn’t do drugs. That brownie truly is the beginning of poor Artie’s roller coaster ride of adventures....

“Well, this part,” August said. “You still have to go to court.”

A tear spilled down his cheek and—God!—August was lost. That look! Who couldn’t feel for this kid? He didn’t look like he’d step on a bug if he could help it, let alone be dealing drugs. Certainly not skip on his bail. If for no other reason than he’d probably be too afraid to. Right now, he looked like he would pee his pants if August shouted “Boo!”

He didn’t intend to do that.

Because August Sterling was lost in Artie’s eyes.

He’d forgotten all about Harry Bedford’s girlfriend and how innocent she had looked.
Right before she stabbed him in the back.

When August checked his messages, he saw another call had come in while he was dealing with Artie. Luckily, everything was smooth sailing, and the next person who needed bail paid promptly and politely. No more calls after that, and while maybe he should have called in to the office to check, August wanted to change out of his tuxedo. Needed to. He headed out of the court house, and that’s where he found Artie Bailey. Sitting on the steps. He was resting against a railing, and for a moment August thought he was asleep.

He stopped next to him. “Artie?”

Artie looked up at him slowly. “Yes?”

Artie looked away. “Nooooooo...,” he slurred.

August took a deep breath, looked around, and sat down next to Artie. “What’s going on?”

“I am so fudging stoned. Criminy. It’s been hours and I am still stoned!” He looked at August, and there was fear, or maybe panic, in those eyes. “You don’t think I did too much, do you? Could I be brain damaged? Am I going to stay this way?”

August chuckled. Criminy? Really? People still said criminy? His grandmother used to say criminy. “No.” He laid a hand on Artie’s shoulder and gave it a squeeze. The shoulder was harder than he thought it would be. Concentrate! “You’ll be fine. You just ate a lot of marijuana. You’ll be okay by tomorrow.”

Artie trembled and looked away again. “I sure hope so.”

Then August thought of something he hadn’t before. Something that he normally didn’t worry about. Something that, after all, really wasn’t his concern.


Artie shook his head. “My car is at my apartment.”

Artie gave a very long sigh and then pointed down the street. “I tried. But when I looked at the bus schedule, I couldn’t figure it out....”

Truly and righteously stoned. It was all August could do not to laugh. But that would be mean, wouldn’t it? And Artie really was adorable.

Before he even knew he was doing it, August said, “Would you like some coffee, Artie?”

Artie looked up, and oh, the gratitude written on that face. “Oh yes....”

“There is a nice place not too far from here we can go to. It’s the least I can do.”

Artie sighed. “You already got me out of jail....”

Artie looked away, and after a moment August had to wonder if Artie remembered he was there. “Artie?”

The way the kid jumped, August thought maybe he was right.

August stood up, helped Artie to his feet, and guided him back to his car in the parking lot down the street.


And that, dear reader, is where the adventure begins...

For anyone who ever liked all those wonderful old movies, I think you will love “Getting His Man”. Or at least I hope so! I’m keep my fingers crossed. 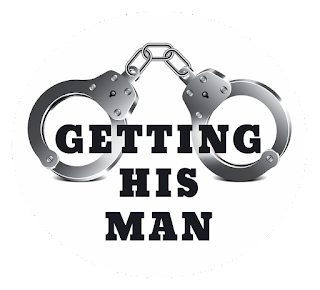 “Getting His Man” is the first in a series of three books (I hope). Because August has a single business partner—or sort of ruff and gruff man—who is very lonely and deserves a little romance himself. And then there is...but no! That would be telling! 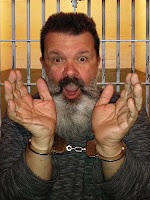