Thank you for hosting me today! Stick around, and I'll be offering a giveaway at the end of the post!

Cities. I grew up in one, visited several, and I can tell you that every city has its own personality, its own individual feel. Chicago feels very different from New York (but not entirely unlike Philadelphia.) I’ve never been to another city quite like San Francisco either.

There are two cities in Angel 1089, Old Trent and Heaven. In the first book, we only get glimpses of Heaven, through Gabe’s memories and the hopes of others. But we get to experience Gabe’s experience with Old Trent, what was built out of the ruins of Trenton, NJ.

I honestly tried to get a “Trenton Makes, the World Takes bridge” reference in the story, but never quite fit it in. If you are familiar with the bridge, it’s the one Gabe flies over toward the end of the book. https://en.wikipedia.org/wiki/Lower_Trenton_Bridge

Old Trent itself is meant to have its own personality, imbued by the characters who live there. But the city lives and breathes on its own, a place that almost exists. Gabe learns this, during his exile from Heaven, and eventually comes to love the city, and the people in it.

I hope you do as well!

At the end of the blog tour I'll be giving away four $10 Dreamspinner gift certificates! 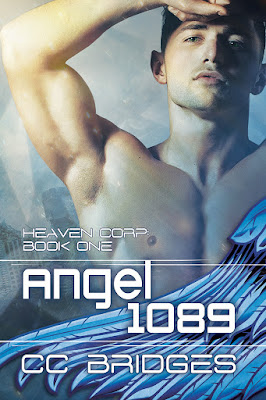 A deal with the devil….

Gabriel 1089 is an angel—an enhanced and cybernetically modified human designed to protect the city in the sky called Heaven. He follows Heaven’s orders and fights its enemies. But when an attack by demons leaves him trapped on the earth below, missing both a metal wing and his network-enabled halo, he’s cut off from his home for good and at the mercy of one man.

Jeff Werth is used to demons in need of his mechanical expertise showing up on the doorstep of the junkyard he runs in Old Trent. However, he doesn’t expect to be stuck with an injured angel. Jeff owes the demons for saving his daughter’s life, so he does what they demand—he nurses the angel back to health and keeps close track of him as a possible pawn in the high-stakes war between Heaven above and the demons below. But he doesn’t expect the effect Gabe has on his heart, or having to choose between his daughter and the man he’s come to love.


CC Bridges is a mild-mannered librarian by day, but by night she writes about worlds of adventure and romance. When she's not busy solving puzzles in an escape room, she can be found diving into comics or binge-watching superhero movies. She writes surrounded by books, spare computing equipment, a fluffy dog, and a long-suffering husband in the state of New Jersey. In 2011, she won a Rainbow Award for best gay sci-fi/futuristic novel.