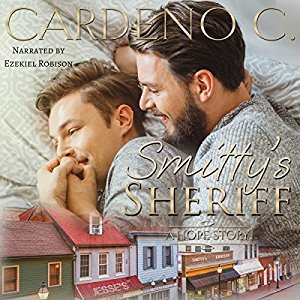 
Todd is too flakey. Richard is too stubborn. Together, they're perfect. A May-December couple get a second chance at love.

As much as I enjoy Cardeno C. and loved McFarland's Farm when it came to Smitty's Sheriff things just kind of fizzled.

'Smitty's Sheriff' is a May/December, second chance romance and while I'm ok with May/December romances especially if they're done right when it comes to second chance stories I'm totally a fan. I just have such a soft spot for second chance stories. So when I read the blurb for this one it sounded interesting and while I haven't listened to a lot of books narrated by Ezekiel Robison...just one to be exact but I enjoyed his narration of that book so when 'Smitty's Sheriff' crossed my radar odds were good that I'd really like it. Unfortunately as sometimes happens...it was a crap shoot and what I had hoped would be and 'I loved it' audio book ended up being an 'it was ok' audio book.

Truthfully if I'd read the book this would probably have been a 2 maybe 2.5 star read, it was the narration that kept that from happening. Ezekiel Robison did a very solid job with this and I enjoyed his performance. His characters were unique, expressive and the voices suited how I imagined they would be. So truthfully when it comes to just the audio portion of this story it's a solid 3.5 maybe 4 stars from me. I'd definitely listen to this narrator again.

When it comes to the story...well, I had issues of which the main one was Sheriff Richard Davis...sorry, but this character annoyed me...at times...a lot. First off the fact that he has a relationship with a guy (being the other MC, Todd) for 3 years and then just cuts all contact with him. No explanation in any way shape or form...no phone call, not even the dreaded Dear John letter, e-mail or even a text message. Who does that? Add to this the fact that he basically kept the relationship  in the closet not because he's not out as being gay or Todd's not...no it's because of Todd's age.

Needless to say this leaves poor Todd more than a little confused as he's still wondering 6 months later what happened, what he did wrong?

As well as how he ended things with Todd, I was less than impressed with how he treated him. Most of the time when it came to Richard it felt like Todd was walking barefoot on glass shards. He never seemed to be sure of what he should do or whether he'd done the right thing or screwed up. Honestly if I had to live that way I'd be a nervous wreck or more than likely I'd be the one doing a Richard and walking away. Honestly I'd have a hard time living with someone seemingly wanted to control every move I made and quite truthfully there may have been nearly 20 years between them but Todd wasn't a five year old and things would have gone better for me if I hadn't felt like Richard treated Todd like a 5 year old.

However, in Richard's defense I will say that Todd's decision making skills may have been slightly lacking at times but given that he had a really strong need to please Richard all it would have taken to sort things out would have been for Richard to open his mouth and talk instead of walking away.

So at the end of it all it comes down to 2 - 2.5 stars for the story and 3.5 maybe 4 for the audio and me splitting the difference and calling it a day at 3 stars.

An audio book of 'Smitty's Sheriff' was graciously provided by the publisher in exchange for an honest review.