ARC Review: Regret Me Not by Amy Lane 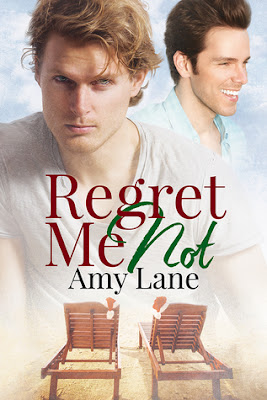 
Pierce Atwater used to think he was a knight in shining armor, but then his life fell to crap. Now he has no job, no wife, no life—and is so full of self-pity he can’t even be decent to the one family member he’s still speaking to. He heads for Florida, where he’s got a month to pull his head out of his ass before he ruins his little sister’s Christmas.

Christmas is just around the corner, and Pierce is having a bad year. A terrible auto accident essentially shattered the left side of his body; he's getting a divorce; and he lost his job. He's angry and bitter (not to say I blame him). He even snaps at his sister, an angel who's been taking care of his grumpy ass (and two young kids besides).

So Pierce escapes to Florida, to his best friend's beach condo. The plan is to do water exercises, eat canned soup, and wallow in misery. The plan is not to meet and fall for Hal, a 23-year-old fitness instructor/massage therapist/healing guru.

The story is told solely from Pierce's POV, so Hal remains a sparking diamond: a bit unfocused, yeah (he's been working on his degree for five years but is yet to graduate), but also kind, comforting, and so damn sweet, Pierce just wants to lick him like a lollipop.

Hal calls Pierce a unicorn, but Hal is the unicorn, a sort of untouchable presence that's RIGHT THERE if only Pierce would leap.

This is a slow story: slow burn, slow plot, just slow; not boring exactly, but the focus is entirely on the daily lives of Hal and Pierce as Hal puts Pierce through the paces of a workout regime and sneaks in sly touches. There's also shopping.

Almost nothing happens until Pierce talks to his ex-wife (whom he's divorcing because she's a judgy bitch, which just makes him seem like a judgy bitch) and loathsome parents who are trying to crash Christmas. Both of these conversations felt forced; the first showed that Pierce can be a nice human, the second that he can be an asshole if he needs to be.

I wasn't sold on the idea of Hal and Pierce's relationship. I honestly just didn't FEEL the passion, despite the fair amount of steam.

I wanted to get into this story because I love Amy Lane's Christmas books, but I found myself distracted by the dialogue (the whole "you're a unicorn" thing got old fast) and wanting the story to just get on with it already.

I did like the hurt/comfort aspect. Hal is an amazing caretaker and really pushes Pierce to stretch and move and not give up.

The book ends on a HFN, but there's an author's note stating that Pierce and Hal's adventures will continue on Amy's blog.