ARC Review: Out for the Holidays by Cara Dee 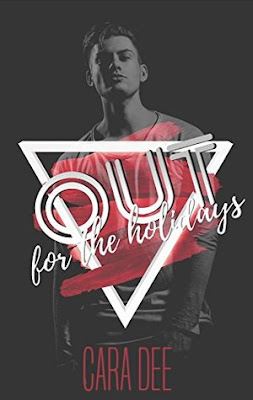 Before we knew it, our peace and quiet went out the window, and we were headed to Mexico for a photo shoot my agent had neglected to tell me about. Of course, we had to deal with the man who didn’t want us to be together, and then we ended up back in LA, and we had to figure out what was going on with my brother, and, and… Okay, deep breaths. FYI, Philadelphia is nowhere near our home in northern Washington. Additionally, I wonder how Viagra really works, and what’s it gonna take to get a proposal around here?

Honestly. I’m not saying Henry jinxed us, but I’m writing the damn card next year.

Warning: This story contains more sugar than the cookies you leave for Santa, and it's chock-full of greetings and updates from other characters written by Cara, titles including Noah, Home, Path of Destruction, Uncomplicated Choices, and more.

This book is stupidly hot!

Set more than a year after the end of Out, Out for the Holidays (which, as a novella, is still longer than some shorter novels) takes us on a ride with Zach and Henry as they celebrate their second Christmas together.

Their first Christmas was crazy, with Zach modeling and the boys settling in at college in L.A., so Henry and Zach are more than ready to spend December at home with their two dogs and one fat cat.

Alas, fate has other plans!

Zach finds out his agent booked him for a modelling gig in Mexico, where he'll have to work with the jealous, slimy Joseph. Thankfully, Henry comes with him, and things with Joseph come to an ... orgasmic (and sort of hilarious) conclusion.

Some follow-up stories mess with a couple's HEA, and while Out for the Holidays does contain some conflict (issues with Mattie being overwhelmed at school and the above-mentioned Joseph situation), Zach and Henry are SOLID. They're communicating better than ever and their sex life certainly hasn't slowed down.

As a bonus, we get a glimpse of Adrian & Dominic, Noah & Julian (getting frisky in a hot tub!), and Casey & Ellis. (No, this book cannot be read as a standalone.)

Seriously sexy, funny, and sweet, Out for the Holidays reminds me of why Out is on my Best M/M Romance of 2017 list.

Reading gives us someplace to go when we have to stay where we are.