ARC Review: In Case of Emergency by Keira Andrews 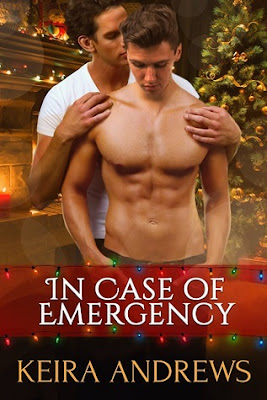 
After years alone, Daniel Diaz is finally ready to shake up his orderly, solitary life. He's about to leave for a cozy Christmas getaway with his new man when he gets the call from the ER that his former stepbrother has been admitted with a concussion and a broken hand—and Cole put him down as his emergency contact. Why the hell would he do that? Daniel barely knows the guy. After all, their parents' marriage lasted less than a year and it was a decade ago!

Two former stepbrothers meet again in this sexy holiday story by one of my favorite authors, Keira Andrews.

Daniel and Cole lived together for a few months when Daniel was 18 and Cole 13. Daniel was resentful, wrapped up in his new boyfriend, and basically ignored Cole. But Cole worshiped Daniel.

Ten years later, the men are thrown together during the holidays at a luxurious chalet Daniel rented for himself and Justin, a colleague he's sort of seeing who turns out to be a grade A douche canoe.

The story includes some very steamy scenes (two words: HOT TUB), which I really appreciate, as most holiday stories are more pristine than newly fallen snow.

While the MCs move from awkwardness to a fierce connection very quickly, I chalked that up to the constant togetherness. Cole is no longer a kid, and sometimes people just click. There's also an element of hurt-comfort, as Cole has a concussion and broken hand.

I had a couple niggles with the story. For one, Daniel acts like an arrogant, disdainful asshat when he first sees Cole. He acts sooo put out that Cole needs his help.

We later find out that Daniel was wounded by an ex, and I warmed up to him, albeit slowly.

The second issue is that the way Daniel was described (as an uber successful, stoic, distant HR director) didn't jive with his actions toward Justin. I get that Daniel was lonely, but what HR director allows an employee to give him head in the work parking lot? It's incredibly unprofessional, bordering on unethical.

Plus Justin (who thankfully is never really in the picture) was a little OTT in the douchenozzle department. He was so obnoxious as to be almost a caricature.

Despite these relatively minor niggles, I really liked In Case of Emergency. I love Andrews' writing style and the "cabin in the mountains" feel of the story. Cole was such a sweetheart, and the epilogue warmed my heart.