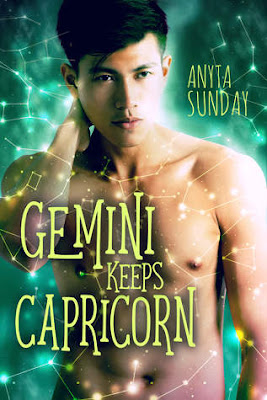 
Sometimes, one stubborn Capricorn is all it takes… to drive Wesley Hidaka to crazy, flirtatious lengths.

Wesley loves annoying his RA, Lloyd Reynolds. He just can’t help it. Lloyd is focused, decisive, grounded. He has this amusing ability to follow rules. Of course Wesley wants Lloyd to break one… or three hundred.

Sometimes, one smirking Gemini is all it takes… to have Lloyd laying down the law and marching Wesley straight back to his dorm room.

It doesn’t stop Wesley teasing again. And again. And again… But damn. Lloyd doesn’t crack easily. He’s full of principles. He’s unshakable. He’s the perfect friend to have when Wesley needs help. Like with his truant brother and his old high school principal.

Sometimes, one little lie is all it takes… to find Wesley fake-engaged to his off-limits RA.

What can he say? It seemed like a good idea at the time…

This series brings me joy, although I’m not into astrology. But who hasn’t read their personality profile according to the Zodiac? I speak like the skeptical Virgo that I am: even if it’s not accurate, it’s fun!

Wesley has convinced himself that he, a Gemini, and Lloyd, a Capricorn and the resident assistant on his floor, aren’t compatible. Wesley believes (but does he really?) they’d have bad sex, which of course doesn’t stop him from tormenting Lloyd every chance he gets.

Wes loves to get under Lloyd’s skin. He flirts with Lloyd, borrows his condoms, and pretty much hates on all of Lloyd’s short-term boyfriends.

Lloyd fixes the running toilet on Wesley's command but tells Wes he doesn't have a pretty face.

*spoiler alert* Me thinks Lloyd doth protest too much.

Lloyd is a responsible guy. He doesn’t want to start something with a resident under his care. But he sure spends a lot of time with Wesley.

This mating dance has been going on for over two years! Can you imagine the UST?

There’s almost no angst in this story. The conflict relates to Wes’s younger brother, Caleb, losing his motivation to excel at school and Wes’s awkward interactions with his conservative, religious mother.

Like the other books in this series, Gemini Keeps Capricorn is the very definition of slowwww burn. And I mean tortoise SLOW. There’s no steam until the 90 percent mark. I was expecting this, but I still found it a tiny bit frustrating.

Even so, I really enjoyed the story. The epilogue was crazy sweet, and Anyta’s coffee quips made me laugh.

I don’t suggest skipping the other books (because they're awesome!), but this one can be read as a standalone.