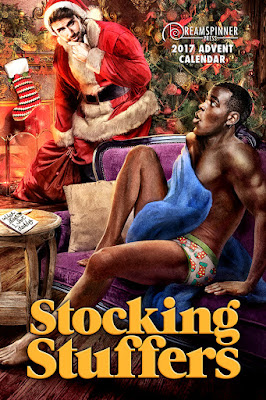 A fire marshal secretly posing as Dear Ruth needs to take his own advice on matters of the heart.

Bryce is slow on the uptake, so his handsome new neighbor has to resort to less than subtle clues to make Bryce see the light. Bryce is convinced Noah is straight because he has a daughter. Meanwhile, it's obvious to us that Noah returns Bryce's crush.

A sense of loneliness permeates this quiet story. I enjoyed reading the Dear Ruth letters. No steam at all, but the ending is truly heartwarming.

What a magical, enchanting story, brimming with warmth and hope!

Laurence, a military doctor, suffered a head injury that's left him confused and unable to do even basic calculations. Lost in a blizzard on Christmas Eve, Laurence stumbles upon a cozy cottage with fire and food aplenty. And if the man living there claims he's a wizard, well, Laurence is determined to carry on.

Avery and Laurence fit together like magnets, but on the twelfth night, Laurence wakes up alone. Can true love break a centuries' old curse?

Durreson packs so much into this novella: brilliant writing, wonderful secondary characters, passionate kisses, and a fairy tale ending.

This is an established couple story, with most of the relationship development summarized vs. being shown on page.

One of the MCs is a billionaire (not a spoiler; see title) and goes to desperate measures to have his boyfriend, who works at his best friend's small electronics store, home early on Boxing day.

I found the story amusing (especially the Smart Shower thing), but all the sex was fade to black; there was potential for role play and a shiny new butt plug that was entirely neglected. *pouts*

Kyle is busy running a coffee shop. Steven is the director of a homeless shelter down the street. They flirt over coffee until Steven needs Kyle's help on Christmas day.

The chemistry between the men, albeit difficult to develop in 30 pages, was entirely missing. The dialogue was a little stilted too. Includes: candy canes, one steamy scene, and very abrupt ending.

Painfully cheesy! The MCs talked like they were negotiating a business transaction.

When the story begins, Craig and Aaron have been dating for nine months, but they've kept it very casual. Aaron has never been to Craig's flat, and they're yet to say the L word.

On Christmas Eve, Aaron finds out Craig has been keeping a secret from him. There's much drama, followed by an immediate reconciliation, followed by Cheer and Forever. Way too much sugar, even for me. There's one steamy scene I skimmed and a HEA worthy of Tiny Tim.

“One can never have enough socks," said Dumbledore. "Another Christmas has come and gone and I didn't get a single pair. People insist on giving me books.”

ARCs of these stories were provided by the publisher in exchange for an honest review. Download links are provided as a courtesy and do not constitute an endorsement of or affiliation with the book, author, publisher, or website listed.