Lancaster’s Luck is set in a steampunk world where, at the turn of the 20th century, the eight powerful Convocation Houses are the de facto rulers of the Britannic Imperium. In this world of politics and assassins, a world powered by luminiferous aether and phlogiston and where aeroships fill the skies, Captain Rafe Lancaster, late of Her Majesty’s Imperial Aero Corps, buys a coffee house in one of the little streets near the Britannic Museum in Bloomsbury.

So begins the romantic steampunk adventures which have Rafe, a member of Minor House Stravaigor, scrambling over Londinium’s rooftops on a sultry summer night or facing dire peril in the pitch dark of an Aegyptian night. And all the while, sharing the danger is the man he loves: Ned Winter, First Heir of Convocation House Gallowglass, the most powerful House in the entire Imperium. 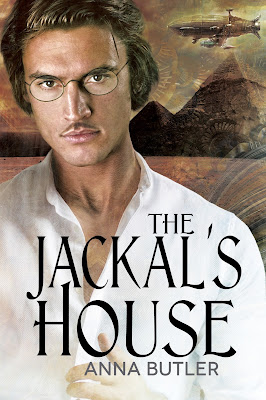 
Something is stalking the Aegyptian night and endangering the archaeologists excavating the mysterious temple ruins in Abydos. But is it a vengeful ancient spirit or a very modern conspiracy….
Rafe Lancaster’s relationship with Gallowglass First Heir, Ned Winter, flourishes over the summer of 1900, and when Rafe’s House encourages him to join Ned’s next archaeological expedition, he sees a chance for it to deepen further. Since all the Houses of the Britannic Imperium, Rafe’s included, view assassination as a convenient solution to most problems, he packs his aether pistol—just in case.

Trouble finds them in Abydos. Rafe and Ned begin to wonder if they’re facing opposition to the Temple of Seti being disturbed. What begins as tricks and pranks escalates to attacks and death, while the figure of the Dog—the jackal-headed god, Anubis, ruler of death—casts a long shadow over the desert sands. Destruction follows in his wake as he returns to reclaim his place in Abydos. Can Rafe and Ned stand against both the god and House plots when the life of Ned’s son is on the line? 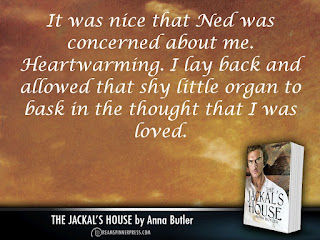 Like Ned, I’d spent years in hiding. His constraint had been matrimony and the sense of honor and duty that would never have allowed him to be unfaithful to the mother of his sons. Only her untimely death had released those bonds. Mine had been less noble: I had no desire for a court-martial and a dishonorable discharge from Her Imperial Majesty’s Aero Corps. Most of my encounters over the years had been quick and furtive, but I’d taken every chance I could to practice my technique.

I not only liked kissing, I was good at it.

Fast little kisses to start with, kisses that barely made contact with the skin of Ned’s throat, kisses meant to tease. He tilted his head back to let me in, closing his eyes. His mouth opened on a soft sigh. I hoped he was giving himself up to the pleasure, losing himself in it, that nothing mattered to him at that moment except the feel of my mouth on his throat and lips. I hoped so. I wanted to please him.

I kissed and licked the delicate skin under his ear until he choked with laughter at the tickling. He tightened his grip on my hands and tugged at them until I raised my head. Ha! He’d lulled me into trusting him there and took full advantage of it. He swooped to capture my mouth with his, cutting off breath and thought, bringing a dizzying warmth with his hot tongue, and making me moan.

Of course, they were very manly moans.

‘The Jackal’s House’ is the second book in Anna Butler’s amazing series “Lancaster’s Luck” but before I get into trying to explain why it’s amazing without giving away anything about the story. I’m just going to do a bit of housekeeping here…first for anyone who’s familiar with steampunk it won’t come as any surprise that it has a bit of a language that’s all it’s own and at some point during the reading of this book I realized that when I did my review for ‘The Gilded Scarab’ the first book in the Lancaster’s Luck series I forgot to mention that the author has conveniently placed a glossary at the end of the book to assist the reader in clarifying those ‘what- does-that-mean?’ words…you may even want to have a peek at it before you start reading the book.
The other thing I want to say is if you haven’t read the first book…seriously reconsider starting with this one. Lancaster’s Luck is a series that needs to be read in order. There’s a lot in ‘The Gilded Scarab’ that connects to this book and I’m not sure that I would have enjoyed this story nearly as much without having read the first book.
Ok, now let’s see if I can do justice to this book. Because while I really, really liked ‘The Gilded Scarab’ this book…well damn this one just blew it all out of the water for me. ‘The Jackal’s House’ for me was totally a 5 star read…only because they tell me that’s all the stars I can give it, otherwise there’d be a hella’ lot more of them up there at the top of this review.
Unlike the first book most of this story takes place in Aegypt as Rafe accompanies Ned on his next archeological dig. Going with Ned isn’t an easy decision for Rafe to make…he’s got responsibilities, but eventually the idea of being parted from the man he’s come to love and has only had back in his live for a few short months tips the scales and Rafe agrees to go not wanting to miss out on the opportunity for them to have more time together…an opportunity that allows them to have some distance from their responsibilities and the pressures of their lives in Londinium.
While the adventure part of this story got a little bit of a slow start once it got started it kicked into high gear fairly quickly and honestly, I loved the first part of this book as much as the last. We’re given more of Ms. Butler’s amazing world building as she moves us from the steampunk world of Londinium to that of Aegypt and its ancient mysteries.


As Ned and Rafe dig to unearth the treasure of Aegypt’s past…things are happening in both Londinium and Aegypt that could affect the present and the future that they want together in ways that neither man has anticipated and ways that have given this story a whole new and intriguing potential.
As with the previous book this book has a story that is essentially complete but with threads that connect to an overall story arc that extends to the next book…and please, oh please let there be a next book…because there are things that in my heart I just know are lining up to happen. There was a lot that happened in this story by no means an overwhelming amount but some of saw closure to certain events and some things laid the ground work for new possibilities and I am so on board for all of it.
While I’m not a huge fan of historical novels the addition of this being set not in Victorian times but steampunk Victorian times has only added to this story giving it more interest and an entirely unique feeling for me and when it comes to steampunk ironically the Victorian era is my favorite…I’m a total fan of ‘The League of Extraordinary Gentelmen’ or the more recent ‘Sherlock Holmes’ movies staring Robert Downey Jr. and while Will Smith did an admirable job in ‘The Wild, Wild West’ for me nothing compares to the original television series starting Robert Conrad. I’m by no means an expert when it comes to steampunk but I am an expert on what I like and that fact that these stories fit so easily onto the virtual shelf that I keep my favorite steampunk movies and shows…things that have been longtime favorites of mine is for me indicative of the fact that “Lancaster’s Luck” is a series that has struck just the right cord with me and I have no doubt that if someone were to ask me tomorrow, next week, next year or years down the road for an example of what I like when it comes to steampunk this series will be on that list.

An ARC of ‘The Jackal’s House’ was graciously provided by the publisher in exchange for an honest review. 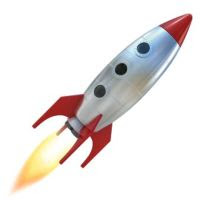