With a new novel on the way, it’s time for a few stops on the blog tour, but blogging about myself feels a little… um… awkward. It’s like going to a party only to have someone unexpectedly turn a spotlight on you and ask you to share a few words.

I don’t like the spotlight. That’s why I’m a writer and not an actor… that and I can’t act. But even if I could, my hatred of spotlights would nix that career.

So I’m not going to talk about me. Honestly, I’m boring anyway. Instead, I want to talk about my newest hero, the indomitable George “Tank” Tankersley. Indomitable might be too strong of a word. He’s having a few problems: a flashback or two, some irrational survivor’s guilt, and a bone-deep weariness that is edging up toward serious depression.

I’m not a psychologist, but the psychologists in the book think it’s probably a dose of PTSD. Luckily Tank landed in the middle of a unit led by Colonel Clyde Aldrich, a man who has embroidered PTSD throw pillows on his couch at home. Clyde and one of the other unit’s fighters, a genetically engineered warrior named John, understand the pain. 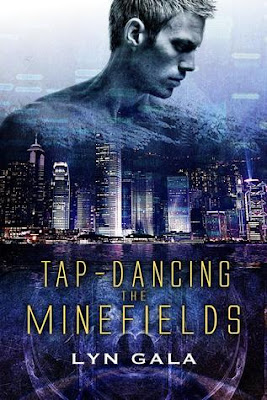 Sometimes the fiercest battle a man faces is against himself.

In the hidden alleyways of New York City, George “Tank” Tankersley defeated what he believed were demons. But the victory cost too much. Tank joined the Army in the hope of outrunning the guilt haunting him—only to stumble into a vast and deadly conspiracy, the enemies he’d hoped to never encounter again, and the arms of the brilliant, eccentric scientist tasked with saving humanity.

In a world where the line between dark magic and alien science is thin, Dr. Lev Underwood must reverse engineer recovered alien technology to give humans a fighting chance against the extraterrestrial beings who consider Earth nothing more than a petri dish. His old friend, Colonel Clyde Aldrich, wants to protect Lev from entanglement with the scarred and emotionally volatile young soldier, but Lev cannot help the pull he feels toward Tank. Still, his first loyalty is to the secret government program, and love might have to take a back seat to protecting the world. But if he can find a way, Lev wants both.

The connecting door opened, and Clyde looked up as John stood in the doorway, silently watching. He had no censure on his face, but he stood as a mute witness as Tank’s cries gradually faded. It took over an hour, but eventually the stiff muscles and hard tremors faded until Tankersley lay limp in Clyde’s arms, either asleep or too worn out to keep grieving. Clyde didn’t fool himself. This was the first step on a long journey. But at least Tankersley had the balls to start down it. Plenty of men could never face their own fears.

“You want to give me a hand?” Clyde asked softly. John moved into the room, a silent shadow as he walked over and knelt down to scoop Tankersley up. He was really out of it. His eyes didn’t even flicker as John lifted him and moved him to the bed.

Clyde sat on the floor feeling nearly as exhausted himself. Watching Tankersley fight through all the pain made his own wounds feel rawer than they had in a while. Losing people. It wasn’t easy. And the officers for whom it became easy weren’t worth spit.


Tank is screwed up, but what I love him for is that he keeps on going.  He doesn’t see himself as the best or the toughest or the brightest, but he’s the one who keeps moving forward when others have given up.  His superpower is being a stubborn bastard.

Luckily Dr. Lev Underwood is determined to make Tank see that he has a lot more to offer.  Tank’s talents have been outshone by others in the past, but Lev sees beyond the mask Tank puts out there for others.

Lev sat cross-legged  in the middle of the bed. “You’re taking this better than most people. I think Clyde’s actually a little suspicious of your whole attitude. He mentioned looking for marijuana in your bags, because no one is this calm without chemical assistance.”

Tank snorted. “The colonel is suspicious of everyone, as far as I can see.”

“Yeah, he is, but he has precedent on his side.” Lev made a face.

Lev looked at him oddly.


“Or not. Vocabulary is not my big strength.” Tank blushed. Nothing like showing off your ignorance in front of a man with a PhD in engineering. Dr. Lev Underwood. That’s who Tank had nailed in a closet. It didn’t take any special brains to know that Lev was way too good for Tank, but it was hard to keep it professional when Lev was sitting in the middle of Tank’s bed. “I’m not exactly brilliant.”

Lev rolled his eyes. “Says the man who blew my aptitude test out of the water. Van Agteren had better improve, or I’m going to replace him as my second.”

“He took two weeks to figure out a creative solution to the leaking snot-conduit problem on the test.” Lev sounded disgusted.

Tank couldn’t tell Lev that he’d spent a good chunk of his high school years playing with this sort of tech and trying to get pieces to work without outing his friends, but that experience gave him an unfair advantage. Tank imagined calling up Zhu and explaining that the government thought he was brilliant with demonic toys. The man would laugh until he broke a rib.

Lev climbed down from the bed. “Are you going to take these quarters?”

Tank did appreciate the idea of privacy. A bunk in the enlisted quarters meant living under the constant gaze of others. Given that most of the base knew Tank was an involuntary recruit, that felt a little like being guarded. “How does the bathroom work?”

“It’s a little gross, but the biologists insist it’s far more hygienic than toilet paper. On the counter you’ll find an informal brochure they give to new people to explain how to use the various bits.”

“Maybe?” Lev gave him a boyish smile, and Tank found most of his aggravation fading away. Despite being older, Lev still had a charm and youthfulness that made him cute. The way he was always adjusting his glasses and looking down as though not sure what to say was a major turn-on. Tank was used to being overpowered by bigger personalities, but with Lev, he felt like there was space for him.

That said, I’m glad I don’t have to live inside Tank’s head all the time because he is a pretty screwed up individual.  But looking back at the stories I love the most, my favorite heroes are broken.

Lynsey “Lyn” Gala started writing in the back of her science notebook in third grade and hasn’t stopped since. Westerns starring men with shady pasts gave way to science fiction with questionable protagonists, which eventually became any story with a morally ambiguous character. Even the purest heroes have pain and loss and darkness in their hearts, and that’s where she likes to find her stories. Her characters seek to better themselves and find the happy (or happier) ending.