Blogtour: The Secret Of The Sheikh's Betrothed by Felicitas Ivey

The Secret Of The Sheikh's Betrothed 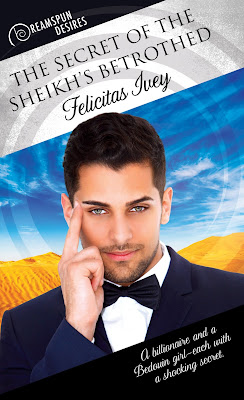 Billionaire Fathi al-Murzim is a workaholic businessman, too busy running the family’s companies to even think about marriage. Too bad he never told his grandfather he’s gay, because Grandfather just announced a childhood betrothal—to a Bedouin girl Fathi never heard about before…

Ikraam din Abdel was raised as a woman by his avaricious and abusive older sister, who didn’t want him to be their father’s heir. He’d never thought to be married either, and is surprised when his sister informs him of his betrothal.

When Fathi and Ikraam meet, they are drawn to each other in a manner neither of them expected. As the plans for their wedding progress, they both realize they need to tell the other the truth. But can they, with both cultural taboos and family pressures to deal with.

I’ve always had cats, I grew up with at least one cat in the house and as many as seven at one time due to one of the cats having kittens. I’m a love me, love my cat person. That’s why in most of my stories have a cat in them. I don’t mind dogs, but they’re a little too high maintenance for me, with the need for walking several times a day. And in New England, that’s a lot of walks in cold and nasty weather for part of the year. Cleaning out a cat litter box sounds much better to me.
I have three cats now. Tamazusa and Mason I acquired several years ago. They’re a pair of sisters who I named after characters from my first novel. I adopted them through a friend of my sister’s from where she works. It was like the world’s weirdest hostage exchange and I was waiting to have hospital security to catch us.
I waited in a dark parking lot to hand off a couple of cat carriers to people I didn’t know and I didn’t know how they’d ID me, when they found me, I handed them the carriers and they came back the next night with them, one cat to each carrier. The girls weren’t happy to be handed out to a stranger and sang loudly all the way home. They were happier when I let them out of their carriers. And soon they were ruling the roost. Making them understand they were indoor only cats now thankfully wasn’t too difficult.
Phoenix, my third cat, I picked up a couple of years later from a student. He’s a sweetheart of a Ragdoll, who she couldn’t keep when she moved out of her boyfriend’s place. He’s fit in very happily with the other two.
You would know I live with cats as soon as you stepped into the house, because I can’t keep ahead of the cat fur, even with weekly brushings. I find it in the oddest places at time. I also have an issue with bits of rubber scattered about my house. I have cushion mats, underneath my computer table, since it’s a standing one. Standing is great, but a little hard on the feet I’ve found. I have the same kind of mats cushioning the two cat trees, the one in my study and the one in the TV room, along with a few other things. The cats have found those mats are great for sharpening their claws on. Tamazusa also has a habit of running to one and nervously clawing for a minute or two. They also use their scratching posts and boards, but prefer the mats above all else. And that causes my house to be filled with tiny shreds of rubber.
There are also a lot of cat toys scattered around, to be stepped on in the middle of the night. As well as crumbled paper balls, since they’re Phoenix’s favor toys. Tamazusa likes soft stuffed mice, even if she has a tendency to ‘drown’ them in their water bowl for some reason.  It’s a little disturbing to find two or three of floating in the bowl in the morning. Mason likes ‘hunting’ her mice, and then showing me her ‘prize’ for praise. I never knew a cat could meow with a mouse in her mouth before her.

The cats sleep with me, especially in the cold weather. They were the one reason I got a queen sized bed. They take one side and I get the other one. We fight about who gets the covers. I usually wake up with Tamazusa and Phoenix curled up against me. The cats like taking turns waking me up to feed them before I go to work. However, none of them have figured out that sitting on my chest isn't going to get me out of bed. Or that sitting in the middle of the bed won’t get it made.
The cats are on a mixture of wet and dry food. They’re fed wet food twice a day and the dry food is usually in a bowl for them to nibble on. Phoenix usually reminds me in the morning to fill it, but haunting me until I fill it to his satisfaction. After that, he retires to the bed to make sure it doesn’t go anywhere. Mason and Tamazusa during the day usually sleep on the sofa in the TV room.
I’ve gotten into the habit of talking to the cats when I’m home. It’s a habit that’s carried over to the outside world and I talk to myself a lot. Mostly when I’m alone in my car or office. But talking to cats does break the silence. But I doubt any time soon, the cats are actually going to answer me when I ask them what they want for breakfast and/or dinner.
So, aside for being a romance novelist, I’m a crazy cat lady.

Felicitas Ivey is the pen name of a harried IT support tech at unnamed Boston-area university. She started writing male-male romance as part of her midlife crisis, because she was starting to get bored of bodice-ripping needing a man in their life heroines, and the guys always seemed to have the better adventures.