A single drop of blood might hold the key to the fate of the magical world, and Aiden Teine must choose between his bond of love and embracing the power to defeat his enemies.

Aiden’s adjustment to being the first vampyre fae hasn’t been easy, but his ties to warlock Thad Blackmoor prevent him from becoming a monster. With Thad, Aiden has a new family, a new purpose, and a new reason to live—though he’s technically undead. There’s one problem: Aiden's control over his vampyre is weakening. He must learn what’s triggering his violent reactions before he surrenders to the creature within. To complicate matters, Aiden discovers his transformation might not be complete, and he fears what he will become.

Aiden’s search for answers thrusts him into a frightening world filled with deception, new dangers, and apocalyptic visions. The part destiny intends Aiden to play could alter his relationship with Thad forever. If Aiden, Thad, and the entire magical community are to survive Icarian’s latest scheme, Aiden must interpret the meaning of the prophetic blood drop before it falls and ushers in the destruction of all creation—and the warlock he loves. 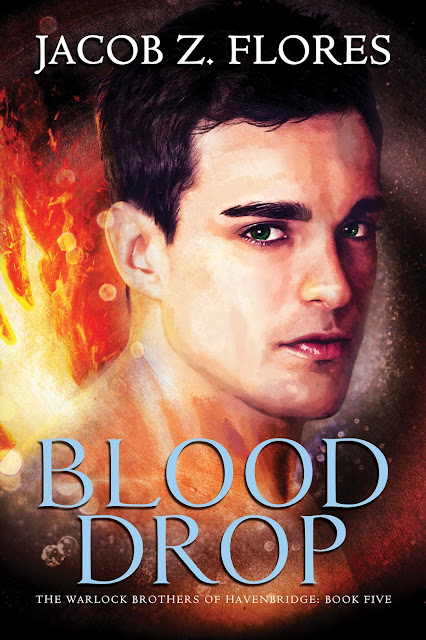 Magic has enthralled me since I was a child. I can still remember those summer afternoons, running around my grandparents’ yard and pretending that I was levitating my enemies or moving objects with my mind. As I grew into an adult, my fascination with the mystical world only grew. The only thing that changed was my realization that I wasn’t telekinetic and couldn’t cast spells.
But, I was only partially wrong.

While I couldn’t summon arcane energies, as an author I could create a magical world and populate it with magical characters. Thus, I began constructing the world on which the Warlock Brothers of Havenbridge is based.

As hard as it is to believe, the journey began in 2015. Two years and four books later, the fifth (and most likely the last) book of the series is set to release on November 6.

I’ve enjoyed exploring this world with everyone. I’ve also had great fun re-imagining warlocks, witches, and wizards and vampires, shifters, and fae. I’m also extremely proud of my boys—Mason, Thad, and Pierce. They have come a long way since book one, but I’m not done with them—yet.

There’s one story left to tell, and it belongs to Aiden Teine, the fire fairy who captured Thad Blackmoor’s heart. Aiden is the narrator for the fifth book, which will answer all the remaining questions from the series. Readers will finally learn the identities of Icarian and the Warlock Hag as well as the devastating truth about the Prophecy of the Three.

However, all endings have a beginning, and that is what I want to share with readers on this tour. I have written a six-part prologue to Blood Drop that will fill in the gap between books four and five and lead right into chapter one. I’ll be sharing each part at the first six blog stops and an exclusive excerpt at the final one. I hope you’ll come along for the ride.

So kick back, grab your favorite snack, and enjoy. Don’t forget to enter the blog’s giveaway. One person at every stop will win a $10 Amazon gift card.

“Has the...yearning lessened at all?” The concern wrapped around Thad’s words reminded me of the shadows that hugged every inch of the woods that stretched out before us—deep and endless.

A part of me longed to take him in my arms and hold his head to my chest. He needed to be comforted and told that everything was better, that the bloodlust had subsided, but I couldn’t lie to the warlock I loved.

The monster within me fed off the rage and the violence of our last battle with Icarian. It grew stronger with each slice of my claws through an enemy’s throat. Every time I drank my fill from a defeated foe, forcing my vampyre back into its cage became almost impossible.

It wanted to claim me, to override the fire fairy I was before I was turned into a magical monstrosity. The beast growled and rattled the bars of its prison, demanding to be set free. It whispered promises of mass carnage, unveiling a never-ending bloody buffet that could be mine if I simply removed its restraints. With its power unfettered, no one would be able to withstand the might of the only vampyre fae in existence.

How could I admit that to Thad though? He cast his hazel eyes to the ground. I didn’t have to. Thad knew me as well as he knew himself. It was part of the magical bond of our love, the blood tie that connected us. We were one body, one mind, and one soul.

“How can it still be so strong, Aiden? It’s been over a week since we battled Icarian.”

Had it only been a week since I unleashed the beast within me? In order to stop Icarian and his witch hunter allies from killing Thad and my friends and family, I’d had no choice.

Now that I no longer needed the demon inside me, the fiend refused to be repressed.

The dead leaves crunched under Thad’s steps as he crossed over to me. The closer he got, the louder the monster within me bellowed. It craved his blood, but the fairy I clung to beat the devil back with a flaming sword. I’d sooner run a stake through my own heart than harm one auburn hair on Thad’s handsome head.

The vampyre within understood and quickly withdrew.

I glanced down into Thad’s hazel eyes and the war being waged within me faded away, transporting me to the home that lived in Thad. I lounged my gaze on the soothing curve of his cheeks and the soft plumpness of his lips. The exposed fair skin on the side of his neck stoked a fire in my groin, and when I slid my hand across his flesh, the desire to merge our bodies into one became the only need that consumed me.

That pissed off my vampyre, which made me smile.

“Tell me what’s going on.” Thad gnawed on his lower lip.

I pressed a kiss to his lips, inhaling the worry that troubled his soul and replacing it with the love that powered us when we were together. He took a deep breath, shaking off the pesky cobwebs of concern. After a few moments, he stood taller. I rested my head against his and pulled him close. “If I knew, I’d tell you.”

“But you have some idea, don’t you?” He pulled out of the embrace and fixed his firm gaze on me.

I didn’t know for certain. I only had a gut feeling. I had previously thought our battle with Icarian had riled up the beast I struggled to contain. Its inherent bloodlust wasn’t the cause. It had definitely been a catalyst, but something more was going on, something only my vampyre could sense.

I’d been a vampyre long enough to know one thing about the monster I carried around inside of me. It was only this agitated when it felt threatened. I enveloped Thad in the protective circle of my arms and made a silent promise to be ready when whatever stalked us was ready to pounce.

To read all 6 parts of the prologue, follow the Blood Drop blog tour and enter to win a $10 Amazon gift card at each stop!

Summers in Provincetown, Massachusetts, provide Jacob with inspiration for his fiction. The abundance of barely clothed man flesh and daily debauchery stimulates his personal muse.

When he isn’t stroking the keyboard, Jacob spends time with his daughter. They both represent a bright blue blip in an otherwise predominantly red swath in south Texas.

Win a $10 Amazon Gift Card
How?
Leave a comment telling Jacob Z. Flores what you think about the prologue
Jacob will choose a new winner at each stop on the tour, so make sure to visit them all! 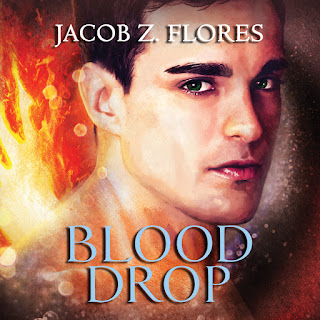