In today's post, we're going to look at the Pinx Video Mysteries, including some recipes from the books, and My Favorite Uncle. And of course, all the way at the bottom, is another chance to win! 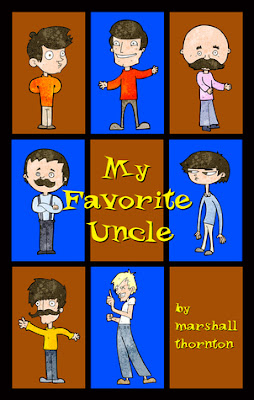 Martin Dixon's carefully-constructed, peaceful life is turned upside down when his super Christian eighteen-year-old nephew Carter shows up unexpectedly on his doorstep and announces he's gay. Martin's first impulse is to send him back to his parents. But when he discovers that Carter has been in a mental hospital to cure his gay-ness he realizes he's stuck with the boy. Unfortunately, the two get on each other's nerves, each driving the other to distraction. Independently, however, they each arrive at the same conclusion. The other would be much less annoying if he only had... a boyfriend. It’s 1992 and Los Angeles is burning. Noah Valentine, the owner of Pinx Video in Silver Lake, notices the fires have taken their toll on fellow shopkeeper Guy Peterson’s camera shop. After the riots end, he decides to stop by Guy’s to pick up his overdue videos, only to find Guy’s family dividing up his belongings. He died in the camera store fire—or did he? Noah and his charmingly meddlesome downstairs neighbors begin to suspect something else might have happened to Guy Peterson. Something truly sinister.

“What is all this?” Leon asked.

“You know the camera shop on Vermont?” Marc asked in return.

“Across from the college?”

“Yes, that one. Well it burned down with the guy who owns it inside.”

“Noah stole these from the family.”

“I didn’t steal them. They left them in the alley.”

“So you stole them,” Leon teased.

“You can’t steal garbage. And when you leave something by the dumpster in the alley, that’s what it is. Garbage.”

Louis stood up. “Here, look at the artistic nudes while I get you a drink.”

Leon took the stack but didn’t look through it. “Oh God! It was a terrible day at work. Everyone was all out of sorts.” He did something with international film sales, I never figured out exactly what. “I have seven women working for me. I have a Korean girl who’s convinced the black girls want to kill her. The Latina hates immigrants so she blames everything on them. The black girls feel like people are blaming the riot on them, which is ridiculous. One of them is married to a plastic surgeon and lives in Brentwood for God’s sake. And the three white women are so busy trying not to offend anyone they won’t say a word.”

Louis returned with a martini for Leon. “Thank you. However did you know?”

“It was the panic and dread in your eyes.”

“You say the sweetest things.” He guzzled half his martini. “So, why did you steal Guy’s photos?”

“Are they that good?”

Louis had gone back to looking through his pile. “Hello. I think we have a winner here.” He kept flipping through. “Oh, definitely.”

He spread about ten pictures out on the table. They were all of an attractive young man in his early twenties. The poses were provocative. In most of them he held a very impressive, very erect penis in his hand. Sometimes he used two hands.

“At least he finishes what he starts,” Louis said, pointing at the most explosive of the photos.

“You do?” Louis raised an eyebrow.


“He’s a VJ. Has a show on that new music channel, Video Hits. Very popular.” Pointing at his obvious assets, he said, “And now we know why.” 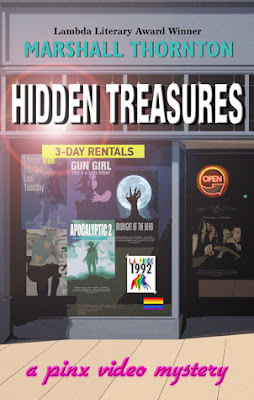 It’s about a dress. A valuable blue sequined dress worn by a famed actress in a film from the 1940s. For some reason everyone thinks video storeowner Noah Valentine has it. Which might not be a big deal except that it’s connected to the murder of a prominent Hollywood costumer.

In the second of the Pinx Video Mysteries, Noah attempts to solve the mystery of the dress. To do so, he must confront a legendary film icon Wilma Wanderly, hunky police Detective Javier O’Shea, the dowager Queen of Watts and a couple of bitter ex-friends.

Thanks for celebrating this fabulous author with us. Come back next week for more of Marshall's books, our author interview, and one more chance to win.