In today's post, we'll talk about Femme, Aunt Belle's Time Travel And Collectibles, and The Perils Of Praline. We also have our author interview, and all the way at the bottom is one more chance to win! Queeny cocktail waiter, Lionel, wakes up to find himself in bed with Dog, a straight-acting softball player and the two embark on a rocky road to romance. A journey that requires coming out of the closet, going into the closet, a pair of red high heels, many pairs of red high heels, a failed intervention, a couple of aborted dates, and homemade pom-poms. Mostly, Lionel and Dog learn what it means to be a man.

Dog’s eyes popped open. He twisted his head around and took in my bedroom. I’d done an excellent job on the room. The walls were an amazing eggplant and the ceiling a delicate sky blue. I’d gotten this gilt- and cream-colored French provincial bedroom set on Craigslist that was so tacky it was chic. For whimsy, I had a collection of mirrors on one wall and throw rugs shaped like various fruits on the floor. My bedding had a zillion thread count and there was so much down in my comforter, my pillows and my feather bed that it was like I’d just shot, slaughtered and plucked a gaggle of geese.

I was waiting for a compliment. Instead, Dog said, “I don’t live here.”

“What a relief! I hate it when people move in uninvited.”

Actually, I might not have minded so much if he had moved in uninvited. He was cute in a lumbering, jockish sort of way. His hair was dark and clipped close, his eyes a soft, puppy dog brown. (Hmmmm, maybe that’s where he got the nickname.) There was a swoon-inducing dimple in his chin and, though he had muscles and very broad shoulders, he also had a sexy, hairy, little belly going on. That was an interesting thought. Since he was currently covered by my comforter the only way I’d know anything about his belly was—

I reached under the blanket and ran my hand across his modest paunch. Yup, it was there. And it was still sexy as hell. And we’d definitely had sex the night before. I was about to move my hand lower and start something new—I mean, after all, if the sex was half as good as I half-remembered we should definitely do it again—but he pushed my hand away and said, “Hey. Don’t do that.”

“Sweetheart, don’t get all excited and scream rape. We’re in bed together naked. That implies a certain intimacy.”

“You’re that waiter from The Bird.”

“Lionel. My name is Lionel.”

“Your name is Dog. Do you really think you have room to talk?”

“Pity. I only remember parts of it. Maybe if we try a reenactment it will come back to us?” He looked seriously worried. That offended me a little. Well, more than a little. “Don’t look like that. Trust me, you had the time of your life.

“I don’t have sex with strangers.”

“Yes, it’s so much better to have cheap meaningless sex with people after you’ve cultivated a relationship with them.” 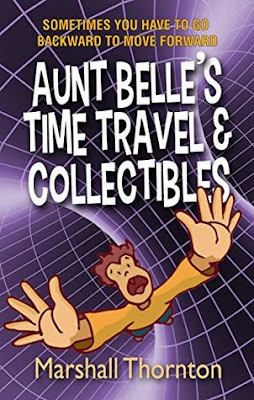 Where would you go if you could travel to any part of your past? That’s the question Terrance faces on his 45th birthday—and right away, he knows. He wants to go back to 1992 and not meet Mr. Wrong. But what begins as a journey to change the past becomes a trip to find the future. From the writer of Femme comes a story of best friends, time travel and going backward to move forward.

I found myself dry heaving in the men’s room at Badlands. Well, one of the men’s rooms. Both of the toilets there were men’s rooms. They let women into the bar but if they needed to use the facilities someone had to guard the door. Luckily, I wasn’t actually puking. That would have put a damper on the whole thing but my stomach had tied itself into a nauseated knot. I kept standing in front the toilet just in case, taking long deep breaths and trying to ignore the smell of urine all around me. As my stomach settled, I realized that I was twenty-some pounds lighter and wearing clothes I’d long ago donated to charity: a white pair of 501s, a black pair of Western demi-boots and a black T-shirt with a big yellow Batman logo on it. The shirt was far too small for me and I’d rolled up the sleeves to show off my biceps—they weren’t that impressive but everyone else was showing theirs. All at once I realized something, this was the outfit I wore when I went out to pickup guys.

As soon my stomach settled, I walked out into the bar. Badlands had a country feel to it back then, barn wood tacked up on the walls, a pick axe hung over the cigarette machine, some big flat metal pans that could have been used to pan for gold. There were two pool tables, a jukebox, a bar shaped like a horseshoe and a dartboard tucked into a corner. The place was packed. I’d barely walked ten feet before I passed six black motorcycle jackets though I was fairly certain there were no motorcycles parked out front.

Despite the jukebox, a DJ played endless techno. It all had the same beat and it was hard to figure out where one song ended and another began. Worse than the droning music though was the smoke. In 1992, people could still smoke inside so the bar was nothing but a cube of smoke. It was disgusting. I was wondering why we ever let people do that when I heard someone calling out my name over the noise.

I turned to see Sean standing nearby. He wore a simple, white, oxford and a pressed pair of jeans with black loafers. It wasn’t too far off from the outfit he’d worn to my forty-fifth birthday brunch. Or rather, the outfit he would someday wear to my forty-fifth birthday brunch. I remembered when I was younger thinking that he was always kind of boring but now I looked at him again, he was kind of elegant. And much better looking than I’d ever given him credit for.


“Are you feeling any better?” He yelled into my ear as he rested a hand sympathetically on my arm. “You turned green and ran away. I told you a sex-on-the-beach is not as fun as it sounds.”

And 3rd today, The Perils Of Praline, Or The Amorous Adventures Of A Southern Gentleman in Hollywood 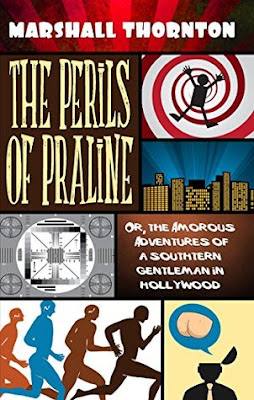 When he falls in love with a contestant on a reality TV show, Peter "Praline" Palmetier decides to leave his home in rural Georgia and, failing to realize this might be considered stalking, travels to Hollywood to find his soul mate, Dave G. Once in tinsel-town he meets a collection of startling, and often horny, characters in his quest. They include a studly steward, a conservative talk show host, the Godfather of the Gay Mafia, and casting assistant Jason Friedman, who always manages to be there in time to save Praline from total disaster. Will Praline find love with the illusive Dave G., or will he recognize the charms of appealing but untelegenic Jason?


Praline Palmetier decided to move to Hollywood while watching an all-day marathon of the reality TV show House-Bound, Season Six. It wasn’t that he fell in love with the stately palm trees and sandy beaches shown during the opening credits, or the trendy bars where contestants drank too much, or even the ever-present possibility of seeing a movie star around every corner. No, Praline fell in love with contestant number 5, Dave G.

Had he been asked to describe the ultimate human specimen, Praline would have described Dave G. The young man was tall—or at least appeared so on television—with velvet brown hair and smoky gray eyes. He was not overly muscled, though clearly athletic—in one episode he’d worn a thong that had shown off a delicious stream of dark hair running from just above his belly button downward. In short, Dave G. was absolute perfection.

It’s not that Praline decided to move to California without angst. He’d been angsting most of the summer. Having graduated with an Associate of Arts Degree in Communications from Laccacoochee Technical College, he had no further plans—no career goals, no special calling, and definitely no aspirations for additional schooling, as he had attained a less than stellar 2.2 GPA. Somewhat anxiously, he spent his nights making Mocha Latte’s at a sci-fi coffee shop called Java the Hut, and his days loitering on his mother’s sofa, which is where he sat—well, slouched actually—watching the special House-Bound, Season Six reunion episode, when on came a commercial for the bestselling book, The Key.

The commercial claimed that all you had to do to succeed in love was imagine down to the tiniest detail exactly what and exactly who you wanted to love you and it would come true, stunningly and amazingly true—especially if you bought the book.

But there wasn’t any need to buy the book, thought Praline. He had just spent most of his summer imagining down to the minutest detail what life would be like with Dave G. In fact, he’d concentrated so hard, so many times, that Praline was sure if he ever happened to meet Dave G. they’d fall instantly and irrevocably in love. And that’s when he realized he had to go to Hollywood, as soon as possible.

When he told his mother about his plan, she nearly burst a vocal cord screaming, “Criminy Jickets!” As an upstanding Christian woman, Robin Palmetier refused to take the Lord’s name in vain. “Praline, you cannot move to California! It is the most sinful, most dangerous, most seductive place on this entire planet!”


And then, in order to avoid a full-on conniption fit, she lit a joint.

Writing is a job. I don’t like to romanticize it. I sit at my desk and write. Some days it’s more of a struggle than others. Sometimes it’s great fun, other times it a drag.

Each book gets written in a slightly different way. I do outline but I’m kind of half-assed about it. I usually get antsy and start before I finish the outline then I have to stop in the middle of the book and start again.

That’s a really tough question. I think the main character of the book I’m writing is always my favorite. Otherwise, the book is very hard to write.

But, I can actually go back and change the books. And I do when people point out typos. I haven’t changed anything major, but I would if I really wanted to. My editor and I are discussing going back and editing all of the Boystown books for tenth year anniversary editions in 2019.


Thank you for celebrating this fantastic author with us all month. We hope you've found a few more books to add to your TBR, and found out some interesting tidbits.

Until next time, happy reading, and happy Thanksgiving to all who celebrate.