Audio Review: Out of the Ashes by Ari McKay 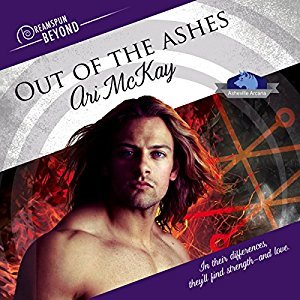 Alpha werewolf Eli Hammond returns from a fishing trip to discover a nasty surprise—five members of his pack murdered and the rest missing. He needs help locating and rescuing his pack mates, but the supernatural council in Asheville, North Carolina, turns him away.

Except for one man.

As they work together, Eli is stunned—and not especially thrilled—to discover half-elf Arden Gilmarin is his destined mate. But as Arden and his friends struggle to help Eli in his quest, Eli surrenders to the demands of his body—and his heart. They’ll need to bond together, because the forces opposing them are stronger and more sinister than anyone predicted. The evil has its sights set on Arden, and if Eli wants to save his mate and the people he is entrusted with protecting, he’s in for the fight of his life.

Have you ever wondered what would happen if an elf, a vampire, a wizard and a werewolf met...

...while I can't honestly say that I have...I can say that it was hella' good fun finding out.

The last thing alpha werewolf expected to find when he returned home was 5 dead pack members and the rest of the pack missing. In need of help to find his missing pack Eli heads to the pack in Asheville and the supernatural community located there. When the supernatural council turns down Eli's plea for help...all except for one person...half-elf, Arden Gilmarin.

As soon as they shake hands Eli knows he's met his mate...something he neither wants nor believes he needs. As Arden and his friends, the vampire Julian and a wizard named Whimsey work with Eli to figure out what's happened to Eli's pack, Eli begins to find it harder and harder to ignore his inner wolf's demands to be with it's mate.

While Arden knows that he wants Eli as soon as they meet what he doesn't realize is that they're mates. I really enjoyed this story. It held my interest from start to finish. Both the storyline and the characters. The pace was fast but not excessively and the mystery and romance were woven together seamlessly. But even more than the story I loved these characters. Arden with his sweet caregiver ways, Eli with his gruff, alpha behavior and determination to keep Arden at arms length, Julian the mysterious vampire who keeps his past a secret and while he's not as open about his feelings as Arden or Whimsy it's still abundantly clear how much he cares about his two friends and the wizard, Whimsy. Whimsy is absolutely adorable and totally a spitfire...seriously don't mess with his friends because he will curse your sorry behind.

This was only my second time listening to an audio book narrated by Andrew McFerrin. I have to admit I was to say the least impressed by this narrator and the challenge he had narrating this story seriously there were a lot of speaking parts in this with a lot of different characters and Mr. McFerrin did a pretty impressive job giving them all their own unique voice and just keeping it straight as to which voice belonged to who and in how wonderfully expressive they were and this all combined to make one of the funnest audio books I've listened to in a while. I can definitely see me listening to this one again.

Best of all 'Out of the Ashes' as well as being one of the books in Dreamspinner's 'Dreamspun Beyond' series, this is the first book in Ari McKay's 'Asheville Aracana' series and I'm definitely looking forward to whatever comes next whether it's Julian or Whimsy or even someone new, I'm on board for what comes next from 'Asheville'.

An audio book of 'Out of the Ashes' was graciously provided by the publisher in exchange for an honest review.