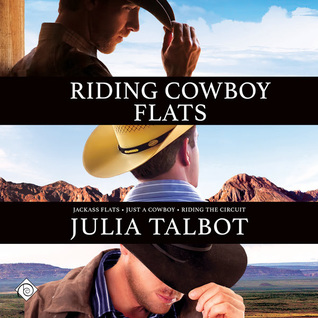 Saddle up and hit the trail with three beloved tales of passion in the great Southwest. From the ranch to the bunkhouse, it's easy to see why everybody loves a cowboy - and these cowboys are ready to ride off into the sunset with that special guy.

Thirty-something Tate feels like nothing more than an old cowboy with his best years behind him - until a young soldier from the nearby base reminds him how it feels to really live. But when news of their relationship gets out, staying together might mean taking on the entire army.

Herschel's just an old-fashioned cowboy who believes everyone deserves a second chance - and nobody needs a fresh start more than Dalton. On the run from a dark past, Dalton is convinced he is beyond redemption. If Herschel can't prove him wrong, they'll both end up alone.

When rodeo cowboy Frost Barton brings his itchy feet home to Southern New Mexico after his father's death, he meets and falls for horse trainer Matt Morales. They might have something special, but Frost isn't sure he's ready to give up the circuit, and Matt wants a lot more than an eight-second ride.

Yipee, ki yay, mutherf...oops, my bad that's Bruce Willis and this is...
COWBOYS!

'Riding Cowboy Flats' is a compilation of three stories all by Julia Talbot all of which are narrated by Adam Gold...who might I say has an awesome cowboy voice...no seriously I know I'm stereo-typing here but this narrator has that wonderful slow, lazy, drawl that I totally associate with cowboys and yes, I know not all cowboys sound alike but listening to Adam Gold narrate this book I had no problem imagining cowboys and I loved that.

So first I'm going to just chat a bit about how much I enjoyed this narrator. I loved that he was able to so richly set the tone for these stories with his voice and yet at the same time he also gave each man their own distinct voice...yep, he ticked all my 'things I look for in an audio book' boxes. I have zero doubt that I will be listening to this audio book again just so I can get a cowboy fix. Now as for the stories, let's talk about them one at a time...

Jackass Flats...4 stars
Tate's only in his thirties but he's feeling like he's just a washed up cowboy...until a certain young soldier, named Dave, enters his life and shows him that he's still got a lot to offer and when things start to go wrong for Dave. It's Tate who's got his back and gives him shelter from the storm.

I loved this one. Tate was honest and straightforward with Dave about things and while he and Dave didn't get off to the best start they still both saw something in the other that kept them wanting more. It wasn't insta-love by any means. From their rocky start to their happy ending Tate and Dave were a sweet and fun pairing. I thoroughly enjoyed listening to their banter and seeing them go from strangers to acquaintances, to friends and ultimately loves and all without angst and drama.

Just a Cowboy...3.75 stars
We met Herschel in 'Riding Jackass Flats' he's a friend of Tate's and a fellow cowboy. Hersch is my type of person, he believes that everyone deserves a second chance and when Dalton comes along he knows that this is someone who deserves that chance despite having a past he wants to keep hidden.

Dalton's finally realizes that the future he wants with Herschel is only going to happen when he lets go of the past...too bad the past is nipping at his heels. Luckily for Dalton, he's found a man who has faith in him and is willing to ride to his rescue.

Not quite my favorite but still an enjoyable story. While there were only 7 years between Herschel and Dalton at times it seemed like a whole lot more, but I really enjoyed the simple and uncomplicated relationship that these two shared when the rest of the world didn't intrude and the best part of this story for me was that Herschel really wasn't a judgmental person and when Dalton needed him, he was there for him. Overall just a really sweet story...no angst and lots of love.

Riding the Circuit...4 stars
Frost Barton rides the rodeo circuit and he's thinking it might be time to retire but when his father passes away and he comes home for the funeral and to help his mother decide what to do with the farm thoughts of settling down begin to tug at him but it's when he meets horse trainer Matt Morales that he really starts to consider staying in one place and if Matt has his way that place will be with him.
'Riding the Circuit' is the third and final story in this cowboy trilogy and a really nice way to wrap things up. As well as introducing us to Frost and Matt, we are given a glimpse of the couples from the previous stories as well. Once again we're given a story with little to no angst but a story that's interesting, sweet and nicely flushed out with details.

'Riding Cowboy Flats' was a sweet, fun and easy listen without an blown out of proportion drama scenes or miscommunication but each story was complete and interesting and had a sweet cowboy romance that I really enjoyed.

If you're a fan of cowboys than saddle up and head on over to 'Cowboy Flats' I think you'll enjoy what's waiting there.

An audio book of 'Riding Cowboy Flats' was graciously provided by the publisher in exchange for an honest review.

Buylinks are procided as a courtesy and do not constitute an endorsement of or affiliation with this book, author or booksellers listed.