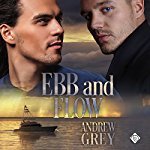 
To achieve happiness, they’ll have to find the courage to be their own men.

As first mate on a charter fishing boat, Billy Ray meets a lot of people, but not one of them has made him as uncomfortable as Skippy—because he’s drawn to Skippy as surely as the moon pulls the tides, and he’s almost as powerless to resist. Billy Ray has spent his life denying who he is to avoid the wrath of his religious father, and he can’t allow anyone to see through his carefully built façade.

Skippy is only in town on business and will have to return to Boston once he’s through. After all, his father has certain expectations, and him staying in Florida is not one of them. But he doesn’t count on Billy Ray capturing his attention and touching his heart.

Billy Ray doesn’t realize just how much he and Skippy have in common, though. They’re both living to please their fathers instead of following their own dreams—a fact that becomes painfully obvious when they get to know each other and realize how much joy they’ve denied themselves. While they can’t change the past, they can begin a future together and make up for lost time—as long as they’re willing to face the consequences of charting their own course.

One man worships at the temple of the almighty dollar the other man worships in the house of god...both men were given sons...kind and gentle souls to nurture and guide in a world that can be less than kind...both men failed.

Neither man truly understands the value of what they have. Billy Ray is the son of a Baptist Minister...man who has raised him to believe that he is less than he is. He loves working on the water as a part of the crew of one of Mike Jensen's Apalachickola Fishing Tour boats (we met Mike in Setting the Hook, book 1 in this series) and he has hopes of captaining his own tour boat one day. But growing up in a home where he's been made to feel like he's not good enough, smart enough...just never quite enough hasn't done a lot for his confidence and he knows that having his parents...especially his father find out who he truly is...that he's gay, is something that can never happen if he doesn't want to lose their love.

Skippy was born in Boston. The son of a successful lawyer. He's spent his whole life trying to get his parents approval. Sent away to private schools at the age of 8. He's worked hard to get his father's attention...earning a law degree from Harvard he then joins his dad's law firm and becomes one of their top producing lawyers, all in an effort to get his father to notice him...to just tell him that he's proud of him. Dad knows he's gay but like everything else about his son he doesn't acknowledge it and he keeps his son busy too busy to have a life.

Billy Ray and Skippy (and yes this is  a nickname) meet when Skippy is sent to Apalachickola, Florida to provide legal representation to a client. Skippy takes some time for vacation and hauls the rest of his 'gay family' back to the house that they rented on their last trip there (it's all in the first book). When Skippy and his friends go out on a fishing tour with Bubba and Billy Ray as their guides they once again invite their Florida friends back to enjoy the bounty of their day giving the two men a chance to get to know each other.

Billy Ray and Skippy may come from different worlds but as they get to better acquainted what they discover is that their lives really aren't worlds apart.


I loved Skippy and Billy Ray, in their own way each man was very different but at the heart of each of them was a kind and gentle soul that had never been shown the love it deserved. That each of them became someone who was capable of showing such kindness to other people in spite of the poisoned environments that they grew up in only showed that we are each the makers of our own destiny.  They could have chosen to be bitter, negative people emulating what they were raised with but they didn't. They chose to be their own person...someone who was good and kind and gave back to the world rather than taking from it. Exemplifying that you get back from this world what you give to it.

We first met William and Mike, the owner's of Apalachickola Fishing Tours along with Bubba, Skippy's gay family in 'Setting the Hook' and I loved the strong secondary role that all played in this book. Series like this where I get new MCs in each book and they become secondary characters in subsequent stories so that we don't really have to say good-bye to anyone are like catnip for me...they leaving me purring and content by giving me something new and shiny that's been surrounded by a touch of the old and familiar.

I first started this series on audio and quite honestly I was so enchanted with both the story and the narration that I decided to continue it this way. Once again Greg Tremblay has added depth to the emotions of the characters brought them to life as he shares their story with the listener.

I wish I could say that I had some insider knowledge on this and that I knew for a certainty whose story we will get next in this series...sadly, I do not, but I do know that I am hopeful that we will see Alex, Skippy's assistant, as one of the MCs in the next story and dare we hope that he will find some happiness with one of Skippy's friends? I guess only time will tell.

An audio book of 'Ebb and Flow' was graciously provided by the publisher in exchange for an honest review.