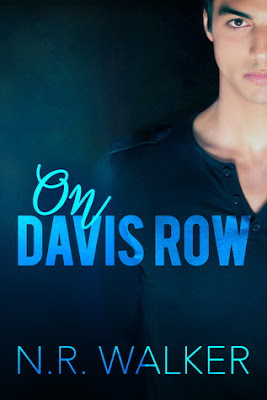 
Nearing the end of a suspended jail sentence should unlock a brighter future for CJ Davis, only the chip on his shoulder is as hard to shift as his bad reputation. Born into a family of career criminals who live down Davis Road, an address the cops have dubbed Davis Row, his name alone is like a rap sheet that makes optimism impossible.

Brand-new parole officer Noah Huxley is determined to see the good in men like CJ. After all, he knows firsthand that bad things can happen to good people. His colleagues mock his doe-eyed optimism, but Noah soon sees CJ’s bad attitude and bravado are weapons he uses to keep people at a distance.

Both men know one simple mistake can change a life forever. At first glance, they might seem to be polar opposites. Yet underneath, they're not that different at all.

Davis Row is nothing but a dirt road leading to a broken-down house where several generations of Davis men have come and gone. And everyone knows you can't trust a Davis; they're nothin' but druggies, criminals, and losers.

CJ Davis works part-time at an auto shop, where he helps the elderly owner, Mr. Barese, any way he can. He also takes care of his Pops, who has emphysema. CJ is on probation but keeps his head down. He has no dreams for the future; he takes it day by day.

Then a new parole officer shows up. Noah is young and idealistic. He isn't jaded and truly wants to make a difference.

But CJ is having none of that. CJ knows better than to trust anyone, particularly someone like Noah, with his fancy suits, big vocabulary, and sharp cheekbones.

On the surface, CJ and Noah are nothing alike, but appearances can be deceiving. Noah hasn't had an easy life either, and he SEES CJ like no one else, sees CJ's struggles, the secrets he holds close to his heart; he sees how hard CJ works, how clever he is despite his lost childhood, the hurt and abuse.

Their professional boundaries (after all, Noah is CJ's parole officer and holds all the power) blur, and Noah becomes more than a friend. He boosts CJ up when others would tear him down.

Then CJ's cruel, deadbeat father gets out of prison, and CJ's peaceful life with Pops, his gentle flirtations with Noah, come to a screeching halt.

What this book lacks in steam, it more than makes up for in love and sweetness. The epilogue is glorious, and I absolutely loved that Walker included both men's POV.

I adored Pops and Mr. Barese. CJ's relationship with both men, the mutual support and respect, brought tears to my eyes.

On Davis Row is a poignant, slow burn story about family, love, and second chances. It's about hope and perseverance, and having someone in your corner.

Fierce, strong, safe, and everything—everything—I needed. I melted against him and could literally feel him mending the broken pieces of my heart, putting me back together again.

I didn't ever want to let him go.