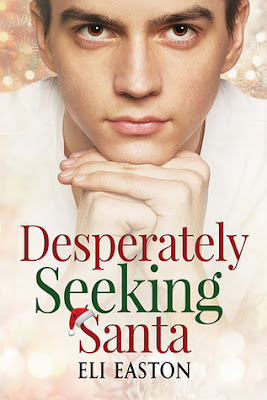 Journalism student Gabe Martin gets his first professional assignment—to write about a Christmas charity dinner that benefits a children’s home. It sounds like a total snooze-fest until Gabe learns that the event’s Santa is a mystery man. He shows up in costume and no one has a clue who he is. Uncovering his identity sounds like the perfect angle to turn a fluff piece into real, hard-hitting journalism.

Mack “The Mountain” McDonall, at 6’10”, is University of Wisconsin-Madison’s enormous star wrestler. When Gabe first claps eyes on him at a wrestling match, it’s lust at first sight. Gabe’s friend, Jordan, sets up the pair on a date. But when Gabe chatters on about his plans for outing Santa, Mack goes cold, and their first meeting becomes an epic fail.

As Gabe researches the children’s home, he learns that Mack McDonall has secrets a guy renown for being a brute wouldn’t want the world to know. Can Gabe find his holiday spirit, write a killer article, court a surly giant, and give everyone a very merry Christmas?

Eli Easton writes the best Christmas stories! I look forward to them every single year.

Desperately Seeking Santa has an extra sweet surprise: Owen and Jordan (from Easton's Superhero) are secondary characters in the story, and we get to see them living their HEA four years later (as seniors in college).

I LOVED seeing these guys again, but if you haven't read Superhero (which is a tragedy indeed), this book works perfectly fine as a standalone.

It's Jordan who drags Gabriel to a wrestling match. Owen is one of the stars of the team, along with an undefeated wrestler named Mack the Mountain who weighs in at 285 (the lowest weight class in college wrestling).

Gabe is mesmerized by Mack; he realizes he has a thing for big guys and wants to climb Mack ... well, like a mountain.

But Mack is reserved and private, and he doesn't seem particularly fond of Gabe, not after finding out Gabe is planning on writing an article about a charity dinner with a mysterious Santa. Gabe is determined to get back in Mack's good graces, but he doesn't want to compromise his journalistic integrity.


There's no homophobia in this story, no family drama, no angst. There's no mystery either. We figure out the truth before Gabe does. Gabe is the first-person narrator of this story, and his perception of the situation is colored by his experiences, which are so different from Mack's.

I absolutely adored Mack, who's huge and a little scary looking but so gentle (but for heaven's sake, don't call him a gentle giant). The relationship between Mack and his dad is filled with pride and warmth. And what develops between him and Gabriel is equally beautiful.

Desperately Seeking Santa is a slow burn, feel-good story about earning trust and letting people in. It's about supportive families, friends who care, and Christmas wishes that do come true.

An ARC of this book was provided by the author in exchange for an honest review. Download links are provided as a courtesy and do not constitute an endorsement of or affiliation with the book, author, publisher, or website listed.
Posted by Dani(ela) at 6:00 AM