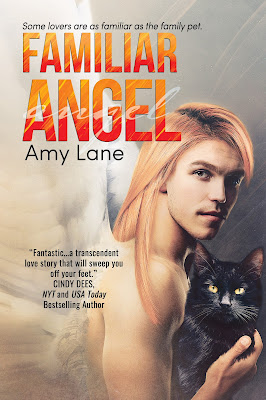 One hundred and forty years ago, Harry, Edward, and Francis met an angel, a demon, and a sorceress while escaping imprisonment and worse! They emerged with a new family—and shapeshifting powers beyond their wildest dreams.

Now Harry and his brothers use their sorcery to rescue those enslaved in human trafficking—but Harry’s not doing so well. Pining for Suriel the angel has driven him to take more and more risks until his family desperately asks Suriel for an intervention.

In order for Suriel to escape the bindings of heaven, he needs to be sure enough of his love to fight to be with Harry. Back when they first met, Harry was feral and angry, and he didn’t know enough about love for Suriel to justify that risk. Can Suriel trust in Harry enough now to break his bonds of service for the boy who has loved his Familiar Angel for nearly a century and a half?

Cats Come in a Clowder


So, Familiar Angel is the first of a three book series about three boys, escaping from a brutal life in a whorehouse, who stumble upon matters far beyond their understanding. They emerge with a new family—and new shape-shifting powers—as the familiars of a very strong, very compassionate witch.

I have to admit, the best part of this whole deal for me would be the ability to turn into a cat.

You may laugh, but seriously—everybody knows those Marvel quizzes? Which superpower would you want? Long life is a good one, and so is the ability to heal wounds, and I certainly wouldn’t spit on super-strength of any kind.

But I’ve always yearned to be a cat.

What’s not to love? I mean, my cats have the life.

Wake up and look for food.

Take a nap on the back of the couch.

Wake up and look for the bathroom. When done, kick sand all over the place because that’s fun, right?

Take a nap next to the owner, because the stench coming from the sandbox is easily slept through and not a nuisance at all.

Wake up and look for food.

The food bowl is half-empty—whine.

It is still half-empty—whine some more.

Join the other cat, whining.

Get fed by sleepy owner who calls you glorious names like, “asshole” and “whiny stupid baby”.

Go into the living room with your ally, the other cat.

Pretend there is no other cat.

Take a nap in the middle of the sunspot on the floor.

Scratch on the door to be let out.

Frolic with the wildlife.

Eat whatever you kill.

If you don’t eat it, just stare at it, being judgy.

You have judged a lizard to death—you deserve a reward.

How about a nice nap, right?


And so on.  I mean… who wouldn’t want that life? You don’t even have to eat the lizard (or the mouse or the bird or the snail on a fall leaf) that you have slain—it’s really sort of trophy hunting at this point anyway, right? You’ve got a full bowl of kibble, and if it’s only a half-full bowl of kibble, your other sport is whining, and it will magically refill itself after an allotted period of whining!

And there are perks! There are pets—if you want them. And if you don’t want them, Goddess has handily equipped you with pointy things on the end of your toes that will get rid of pets temporarily—it’s a lovely system.

Nobody expects you to respond to your name.

And see—that right there is the kicker for Harry.

He spent his youth in a brothel, and when he wasn’t putting out for whoever had a coin, he was scrubbing toilets and doing laundry and whatever anybody asked of him. “Hey boy!” had become the two most hated words in his world, because even if they weren’t followed up by “Bend over!” they almost always took away his will.

Nobody says, “Hey, Cat! Come over here!” Because if you did, your entire family would laugh at you, and the cat would disdain you, and you’d still end up cleaning out the litter box and feeding him kibble.

Being a cat gives you an all access pass to nope the hell out of the stuff in life you dislike the most, and as a human being? I have to say, that sounds like the world’s most glorious superpower, right?

It does to me, anyway.

And hopefully, it does to Harry, Edmund, and Frances… because after they wander into that clearing as they escape from the brothel, they’re going to have an awful lot of practice.

(I shall leave you with a picture of my son’s cat Dewey, who has judged a lizard to death, and is about to take a nap. He has a very satisfying life.)

Amy Lane has two kids who are mostly grown, two kids who aren't, three cats, and two Chi-who-whats at large. She lives in a crumbling crapmansion with most of the children and a bemused spouse. She also has too damned much yarn, a penchant for action adventure movies, and a need to know that somewhere in all the pain is a story of Wuv, Twu Wuv, which she continues to believe in to this day! She writes fantasy, urban fantasy, and gay romance--and if you accidentally make eye contact, she'll bore you to tears with why those three genres go together. She'll also tell you that sacrifices, large and small, are worth the urge to write.