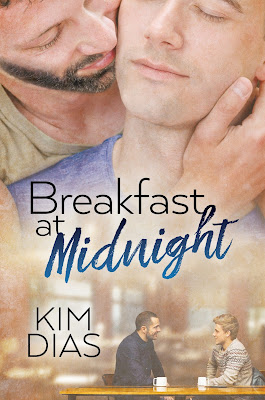 Hope can be found in unexpected places.

Lonely, still struggling with his divorce, and suffering from writer’s block, successful thriller author Fred spends much more time in an all-night Denny’s than is healthy for any man. It’s the last place he thought he’d meet someone like Callum, who has literally run away from the internationally famous boy band Leos.

Despite their age difference, the two become friends, and their long nights of soul-searching might help them find the courage to face their problems: Fred’s deteriorating relationship with his daughter and Callum’s career issues. It’s easy for their lives to tangle together, and each might provide the other the means to move beyond the past—even if it’s not a journey they can take together.

Imperfect sex scenes are so important to me as both a reader and a writer. We are surrounded by narratives telling us that when we find The One, the sex will be effortlessly perfect. Teeth will not clack together; legs will not cramp unexpectedly; changes in position will be executed flawlessly. Everyone will be beautiful and everyone will have an orgasm.

Sometimes that’s fun. Sometimes, especially at the end of a long week when I’m craving a comfort read, that’s exactly what I need. But often I wish the people in the scene came (no pun intended) before the sex did. I wish that bad or awkward sex didn’t automatically mean the characters are wrong for each other. I wish miscommunications took place or that kinks didn’t quite match up. I wish sex reflected the emotional states of the characters rather than their meant-to-be-ness.


The kiss tasted like desperation. Callum’s teeth scraped Fred’s lower lip repeatedly and his grip on Fred’s shirt didn’t loosen for a second. Fred tried to keep up, tried to slow it down and gentle it, but every time he tried, Callum made a sound that felt a lot like please and pulled Fred harder against him. Fred brought his hands up to the sides of Callum’s face, combing his fingers through Callum’s hair, trying to soothe him from… this. Whatever this was, wherever it was coming from.

“Hey,” he said when he managed to pull him away. “Hey, hey, hey, slow down, I’m not going anywhere.”

“Yeah,” Callum said. “Sorry.” But when their lips met again, he still moved too fast, too hard, too strong. Fred winced when Callum bit down too hard on his lower lip.


“Uh,” Fred said. “Sure.” Callum let go of his T-shirt and Fred stood up. He caught Callum’s hand and pulled him to his feet, then led him to his bedroom. He kicked the door closed behind them for no reason—it wasn’t as though there was anyone else in the house. His movements were stiff, uncomfortable. It felt as though a hand was gripping his stomach.

He hoped Callum might calm down a bit once they were there, or maybe that he’d be able to calm Callum down. Soothe him with kisses, undress him slowly. James had always called Fred a romantic—and, Christ, would Fred ever be able to have sex without thinking of him?—and while Fred didn’t think that was entirely true, the idea of rushed, impersonal sex, sex like Callum’s kissing had become, held no appeal for him.

Fred stood beside the bed and pulled Callum against him. His hands spanned Callum’s hips; he liked how easily he could hold him there. He bent his neck to lean his forehead against Callum’s. “Hey,” he whispered.

Callum kissed him. Their teeth clacked together; Callum didn’t seem to care. His hands scrabbled up under Fred’s T-shirt, tugging at it. “Off,” he said, breaking their kiss—Fred tried to ignore his relief.

Fred pulled his T-shirt over his head. By the time he tossed it onto the floor, Callum had yanked off his hoodie and was fumbling with the buttons on the shirt he wore underneath. His hands shook; Fred frowned.

“Callum,” he said, and when Callum didn’t look at him, repeated it. “Callum.”

Callum looked up, all wide eyes. “What?”

“You know we don’t have to do this, right? There’s… nothing. No pressure. No anything.”

Callum’s eyes darkened and his face closed off into a scowl. He got the final two buttons undone and stalked forward, shrugging the shirt off his shoulders as he went. He got his hands flat on Fred’s chest again and shoved. Fred landed on the bed and barely had a chance to register what had happened before Callum straddled his hips. He ground down on Fred’s cock. He didn’t speak—it only took a second for him to lean down and kiss Fred again—but it was the most obvious yes Fred had ever experienced in his life.

Callum felt like desperation. It wasn’t the good kind of desperation either. It was… tight. Frenetic. Wrong.

Kim Dias has been writing for years, but has been making up stories for what feels like forever. She writes love stories, preferably with a side of hot sex; Literary Review’s Bad Sex in Fiction Awards constantly inspire her to do better.

When not focused on her studies at the University of Victoria, Kim spends her time working on her novel, which she swears will one day be finished. She loves dogs, reading in front of fireplaces, and days spent in the sunshine. She believes whole-heartedly that stories can change the world.

You can find her online at kimdias.tumblr.com.