Author Of The Month - Dan Skinner - Week One

In our first post, we'll look at The Price Of Dick, and A Summer of Guiltless Sex, plus a list of Dan's favorite things. All the way at the bottom is also a chance to win one of his books!

First up, The Price Of Dick 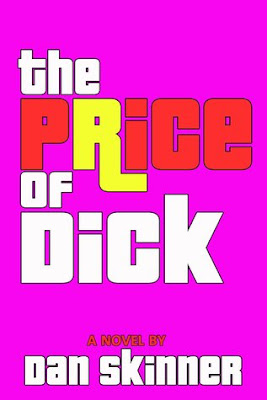 His name is Richard but he'll say, "Call me Dick." He's a big, butch, brainy guy in an executive suit, hotter than spit on a skillet. The type of guy you can see fully dressed and imagine buck naked in the throes of an orgasm - every six-feet-two, muscular, sexually intoxicating inch of him. He's an ambitious freshman in a prominent brokerage firm who's figured out he can use more than his smarts to get ahead. He's perfected a surefire method to drive home a hard deal. No one can resist him. And he's got one really big secret. But that will cost you.

For photographer J.J. Johnstone, the price of Dick just might cost him everything.


Within a couple of weeks he closed the deal. We loaded the apartment’s furniture and the boxes of our belongings into a rented moving truck and moved into the new condo. We still had only one set of bedroom furniture and a petite dining room set that was fine for a small apartment but was dwarfed by the huge open space of the new place. It would be an evolving process to add things to fill up the empty spots.
For dinner that first night we lit the fireplace, roasted hot dogs and drank boxed Cabernet. We had that fuzzy feeling of accomplishment as we talked about decorating. I was still having difficulty choosing a bedroom for myself. I figured since he was paying the mortgage, the master should be designated as his own.
His eyes were wildly static with wine in the dancing orange of the fireplace. “ I had my own ideas about that,” he said. A smile came to his lips. I noticed the first wrinkles crinkle the edge of his eyes. He was maturing. The weight loss had aged his face.
“What?” I wondered.
“Let’s make one the studio, and the other two guest rooms for when the models have to stay over.”
“But that doesn’t leave one for…”
His voice rode over mine. “And we share the master bedroom,” he finished.
“What?” He’d floored me with that.
“Not as boyfriends,” he said, clarifying. “Just friends. But that doesn’t mean we have to sleep in separate places. I mean nobody really likes to sleep alone, do they?”
I’m certain my mouth looked like a huge empty space, matching the rest of the house.
He smirked a little. “Buddies with occasional benefits,” he said with a wink. “We all have needs.”
I was still staring at him in the flickering of flames as he closed the gap between us. He pulled me to his mouth for a kiss that tasted like warm wine and hot dogs. My dick sprung immediately to life in my shorts. I glanced down. It looked like his own was unzipping his jeans for him.
The bed hadn’t even been put together yet. It’s frame stood in pieces against one bedroom wall; the box springs leaned against another. The mattress had been thrown on the floor. That didn’t hinder us as we left a trail of clothes on the stairs; clumsily making our way to it. His half-year of pent-up need spilled out in the form of passionate motion as we ascended the stairs. His kisses missed their mark, catching me on the nose, eyelid and chin in his desperation to get me out of my button down shirt.

Second in today's line-up, A Summer Of Guiltless Sex 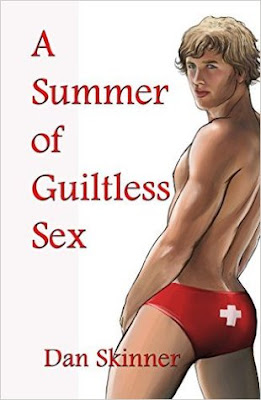 Two very different men, from two walks of life find common ground for an exciting and unique adventure. It'd not been a great beginning of the summer season for either Bill, a young bridal store clerk, or Ted, a college student working as a lifeguard at the apartment complex’s pool. They'd both been dumped in their respective relationships and were still looking for “the one.” Their chance meeting at this low ebb in their lives and an off-the-cuff remark about what they both needed as a temporary solution to their physical needs, lead to a unique and adventuresome pact between the two. They agree to be what's lacking in each other’s lives. They begin a journey of self-discovery. One that will only last the length of the summer and will forever change their lives and ideas about love and friendship. One season of guiltless sex.


I looked down and could see that his parachute had opened. In the next second ourshad as well, yanking us to what almost felt like a standstill. The rush to earth slowed toa glide. The noise of the wind disappeared and all I could hear was this stunning,reverent silence as we gradually eased closer to the ground. I could see Ted’s canopysteering toward the west and recognized the field and the building that was ourdestination: The Dropzone. From the air, I could see its empty field had been mowedin a circular fashion like a bullseye. In the last six minutes of the gentle ride to earth,my fear had transformed into exhilaration that coursed in undiluted thrill though mybloodstream. By the time we’d landed and my instructor had unharnessed me, I’dgone into a delirium of hyper-excitement. I wasn’t alone. I could hear Ted’s hoots andhollers from the fifty-yard distance between us and as he ran it like a linebacker tofinally leap up into my arms with an ear-piercing whoop finale. He was a muscular,heavy guy, but with my surge of adrenalin I spun him around like he was weightless,joining in for a few whoops of my own.
“That was fucking awesome!” he shouted as he slid down from me and jumped inthe air clapping his hands. “Wasn’t that fucking awesome?”
I could only giggle at this point. My communication skills had abandoned me themoment my brain registered the fact that I’d skydived out of a plane.
The instructors were shouting out the last of our instructions which were to meetthem inside for a certificates declaring our jump as Ted leaned in close to my ear towhisper, “I don’t know about you, but that made me horny as hell!”
He wasn’t alone in that either. Beneath my baggy shorts and long windbreaker, Iwas standing at full attention. My grin gave him all the information he needed on that.“Meet you in the restroom after we get the certificate,” he said, before bounding offfor the building.
My eyes followed him, wondering if he’d been joking, but as he looked back at me,he pointed at his watch, held up five fingers and pointed at the building.
By the time I’d helped my instructor carry everything back inside and gotten mycertificate signed verifying my adventure, Ted was nowhere in sight. I looked for therestroom sign and found it pointing toward the entrance, past the souvenir shop. Thisday seemed to have no end of surprises.
The room was a moderate space painted an odd green with matching floor tile. Ithad one large oblong window that ran along the top, providing illumination inaddition to the weak ceiling lights. There were three urinals and sinks with mirrorsthat lined under and adjacent to the window. Next to these were the toilet stalls fillingout the rest of the room and butting up to the back wall of the building. When Ientered, the room appeared empty. The door swished shut behind me. I wondered ifI’d misheard my friend when a hand appeared above the very last stall, waving andthen humorously pointing downward into the stall. I chuckled to myself. He was anirrepressible rogue. I made my way to the end stall. The door opened, and his faceappeared in front of me wearing the smirk of the devil as he wiggled his eyebrows.
“I’m sorry, sir,” he said. “Do you happen to have the time?” And with that, hegrasped me by my forearm and pulled me into the tiny space with him, shutting andlocking the door.

“We can’t do this. It’s dangerous,” I said.
“If it’s good enough for our Republican Senators, it’s good enough for me,” he joked.His eyes had that glazed, hungry look I recognized as being particular to a certainappetite. He seemed hyper-agitated and it showed in the ruddy glow in his cheeks andhis nervous movements. It had been brought on by the rush of adrenalin. He had itbad.
I felt it myself, but it wasn’t clouding my better judgment. “This can wait ‘til we getback to the apartment,” I suggested.
With that, he grabbed my hand and pulled it against his chest. “No, it can’t. Feel myheart.”
It beat beneath my palm like a fierce jungle drum. The rhythm had already seizedhis body. He pushed my hand down to his crotch. The hardness beneath the fly wasunmistakable.
“I need this really bad.” He had pulled me closer as he unsnapped the pants and slidmy hand inside past the elastic of his underwear and directly onto his dick. It felt like arock hard, pulsing furnace. “You do me and I’ll do you.”
He’d already reached for my shorts and was fumbling with the button.


My favorite food is peanut butter. I go thru a big jar of it every two days.

My fave drink is plain ole milk. I drink a gallon of it almost every day.

I like any kind of upbeat music. I listen to a lot of eighties and nineties remixes on YouTube when I'm working: I.E. Thompson Twins, Pet Shop Boys etc.

My fave book is A Separate Peace by John Knowles... it actually inspired my novel, Memorizing You.

My most fave place to vacation is Las Vegas. I've been there six times and I don't gamble. There's just so much to see!

My fave accessory is baseball caps...

Howdy, my name is Dan Skinner and for those of you who don’t know me I’m a photographer of male/male romance book covers and a gay author. I live in the Midwest and I’m an avid runner. For those not acquainted with my work you can find my novels on Amazon. com. The first is MEMORIZING YOU, a YA tale of first love. Others are THE BIBLE BOYS, THE PRICE OF DICK (don’t laugh it actually has another meaning hehehe), The ART OF THE HEART, A SUMMER OF GUILTLESS SEX and a gay Sci-Fi Thriller entitled XPERIMENT. I also have an oldie published at Dreamspinner Press entitled COVERBOY. So, there’s a little something for everyone.

For those interested in my photography I have two galleries - http://danthedanimal.deviantart.com/ and http://theknobgoblin.tumblr.com/.

Be forewarned they are NSFW and very adult-oriented. So sit back and enjoy. I hope to add new and entertaining stuff everyday!

I also have Cover Image Stock For Sale!

Find our more on my blog.


Thanks for celebrating with us. Come back next week for more of Dan's books, five little-known facts about Dan, plus another chance to win.