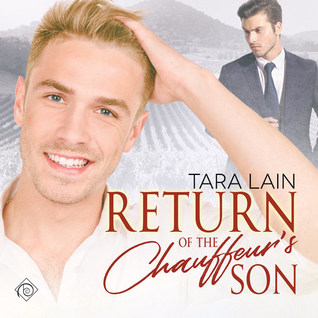 
Luca McGrath may be returning to Napa Valley, California as a promising chef with dreams of starting his own restaurant and winery, but his heart still lives with bad-boy billionaire’s son, James Armstrong. Luca spent his childhood playing games with the golden boy of California society, so blinded by James he barely noticed the dark, quiet lure of his conservative older brother, Dylan Armstrong.

But now, Luca’s home and his own powers of attraction are enough to make James question his dedicated heterosexuality and his promised marriage to a wealthy and powerful businesswoman. The obvious attraction between Luca and James spurs Dylan into action—but he’s fighting a huge secret. While Luca dreamed of James, Dylan dreamed of Luca. When Luca gets caught in the struggle between the brothers and gets accused of culinary espionage he’s ready to chuck the fairy tale—unable to even imagine Dylan’s power to make his dreams come true.

'Return of the Chauffeur's Son' was totally a case of 'right church, wrong pew'. While Tara Lain isn't a new to me author I've read several books by her and for the most part I've enjoyed them but this is only my second time listening to one of Ms Lain's books on audio and while the first one was ok at best. I seriously enjoyed this one from start to finish. I loved the story and with Greg Tremblay as the narrator well...of course I loved the it as an audio book.

Now about the story, Luca McGrath is the chauffeur's son and he's been away from his home in Napa Valley for quite a while about 8 years. He left to study culinary arts in Paris and then went on to make a name for himself in New York but it was also to put some distance between himself and James Armstrong...best friend and unrequited love...you see James is straight, so other than platonic...a relationship was never going to be between these two men. Having stayed away for eight long years Luca is finally lured home by the offer of what will become his dream job...and this is where things become fun.

Luca comes home to find that James isn't acting as straight as he always seemed but this is all complicated by the fact that Luca's finding that while he thinks he still loves James there's someone else who keeps drawing his attention...Dylan, Jame's older brother...yep, we've got an age gap here and for me it's all good because it's only about 10 years and I've never really had a problem with age gaps between 10 - 15 years. But even more importantly I loved Dylan and when Dylan and Luca finally get page time together both in and out of the bedroom...this becomes one hella' good story. The interaction between these two is beyond entertaining more often than not I found myself laughing and just giggling with delight at their banter.


I can't honestly say that I would have enjoyed this story as much had I just read the e-book. I'm sure it would have been close but I have to admit the addition of Greg Tremblay's voice narrating worked wonderfully for me and I was delightfully entertained. This one's more of a slow burn than anything and admittedly it's fairly light on the sexy times there's was really only one full on sex scene and it's well past the 50% mark so...slow burn and well worth the wait. It was sexy and fun. I'm assuming that the author was going for sexy and fun with these two men rather than the more common intense, passion filled first time sex scene and for me it was simply delightful. I'm not talking 'oh-my-god-this-is-ridiculous' here I'm talking two men who loved each other and were comfortable with each other and while simply being together made them happy, sharing the intimacy of love was for them pure joy. It worked, ok I really don't know how else to explain it but it worked and for me their happiness was palpable and came through so clearly in the narrator's voice.

'Return of the Chauffeur's Son' was a light, enjoyable feel good romance with a bit of restaurant intrigue thrown offering several hours of listening fun and leaving me with a happy smile at the end of it all.

A copy of the audio book 'Return of the Chauffeur's Son' was graciously provided by the publisher in exchange for an honest review.