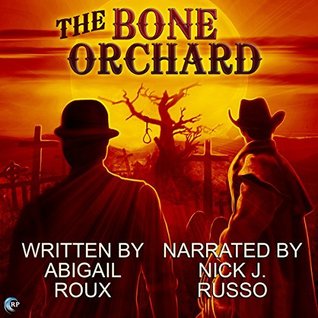 
After leaving a trail of terror and death in his wake, the notorious “Missouri” Boone Jennings finally meets his match in San Francisco when US marshal Ambrose Shaw catches up to him. The story of his capture, and the marshal’s bravery, has already become legend back east by the time Pinkerton inspector Ezra Johns gets off the train from New York City to testify in the murderer’s trial.

When Ambrose is unable to give witness to the evils he’s seen, Ezra becomes their lone hope for putting Jennings in a noose. But if Ezra thinks that’s his biggest problem, he’s got plenty to learn about life—and the afterlife—in the spirited West.

Fortunately, Ambrose is there to assist, and more than happy to oblige Ezra—in the courtroom or the bedroom. He spent his life bringing justice to the Wild West, and if he has a say in it, that’s how he’ll be spending his death too.

'The Bone Orchard' it's a lovely ghost story or is that a ghostly love story...

I'm not a big fan of ghost stories but given that it's getting to that time of year...Halloween! Folks, it's just a few days away. I decided that it's good to have exceptions to every rule and besides this one's by Abigail Roux and seriously the woman knows how to write a story and Nick J. Russo was the narrator so it had strong possibilities and my guess-timate was correct.

At just over 3 hours this works well for an evenings entertainment. I loved this story of good vs evil as US Marsal Ambrose Shaw hunts down 'Missouri' Boone Jennings, there is no limit to what he'll do or sacrifice to catch this man and see him brought to justice. But it's up to Pinkerton Detective Ezra Johns to ensure that Ambrose's sacrifice isn't in vain. Ambrose and Ezra soon find out though that Jennings is an evil that even death can't stop leaving Ambrose and Ezra to spend eternity together...loving each other and keeping justice in the west.

'The Bone Orchard' was a fun way to recognize the time of year and Ambrose and Ezra were a pretty spooktacular pairing and while I enjoyed this story from start to finish it was the ending that I enjoyed the most but I'm not going to spoil it for anyone so I'm just going to say that the ending was definitely not what I was expecting and I really like how it brought things full circle.


I really enjoyed this book as an audio story...it just worked for me in way that I'm not sure reading the story would have. Nick J. Russo's voices were very much in tune with how I imagined these characters to sound...especially Ambrose and when that happens it just makes the story experience that much more enjoyable for me.

While I didn't find this to be a 'scary' story, I did find it to be interesting and as always the narration was spot on...taking this from a good story to something that's probably going to become a holiday tradition for me. I mean really cowboys or ghostly cowboys, evil psycho villains, haunted hotels and jail cells all rolled up into a story that's scary enough to be spooky but not enough to keep me up at night is just the type of Halloween story that I enjoy.

An audio book of 'The Bone Orchard' was graciously provided by the publisher in exchange for an honest review.