On the trail of an aristocrat’s secret son, enquiry agent Mark Braglewicz finds his quarry in a music hall, performing as a trapeze artist with his twin sister. Graceful, beautiful, elusive, and strong, Pen Starling is like nobody Mark’s ever met—and everything he’s ever wanted. But the long-haired acrobat has an earldom and a fortune to claim.

Pen doesn’t want to live as any sort of man, least of all a nobleman. The thought of being wealthy, titled, and always in the public eye is horrifying. He likes his life now—his days on the trapeze, his nights with Mark. And he won’t be pushed into taking a title that would destroy his soul.

But there’s a killer stalking London’s foggy streets, and more lives than just Pen’s are at risk. Mark decides he must force the reluctant heir from music hall to manor house, to save Pen’s neck. Betrayed by the one man he thought he could trust, Pen never wants to see his lover again. But when the killer comes after him, Pen must find a way to forgive—or he might not live long enough for Mark to make amends. 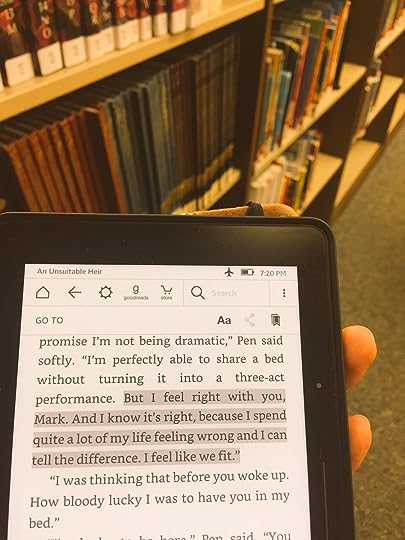 An absolutely perfect ending to a series that got better and better as it went along! K.J. Charles did these characters justice!

I'll admit, I was nervous to read this book.

I've read over 30 books with trans and/or genderqueer main characters, but my average rating of these books is almost exactly 3-stars, with a lot of 1 and 2 star ratings thrown in. I've found that it is difficult for many authors, for some reason, to write trans or gender non-binary characters without giving the other characters a cis-hero complex or having everyone else pat themselves on the back for being decent people. I always say that I want to read a romance with a trans/genderqueer character who is interesting, not just a placeholder for a generic person who fits into the required slot.

K.J. Charles really accomplished something with Pen. Pen (I'm going to use "he" because "he" is used throughout the story, though in current times Pen would probably pick a different pronoun) was a full character. He was flawed, dynamic, strong, stubborn, feminine, masculine, and everything in between. Pen was sexy and confident, which is something I always wish for more of in my trans or non-binary characters. I really just adored everything about how Pen was written, and I could picture him so vividly in my mind.

Mark was actually a stronger, more well-developed character than I was expecting. Mark wasn't just interesting because he had one arm, but the one arm aspect added another dimension to him that enhanced the storyline. Mark was a loyal, honest person who was much more than his "plain" appearance. I think he was a perfect match for Pen, and their dynamic was lovely to watch. I actually could have used an additional sex scene or two with them together because I just couldn't get enough of their chemistry!

But what I really, really loved was how Mark's lack of an arm and Pen's gender identity were aspects of the story, but not the whole story. There was a full plot with mystery, fighting, romance, interesting secondary characters (we see all of the characters from previous books) and just a lot of excitement.

I'm not a mystery reader because I hate suspense, but the ending of this book really does bring everything together. I promise, fellow readers, you won't be disappointed. K.J. Charles managed to make everything work without forcing readers to stretch their imagination to make things fit. Oh, and this book shouldn't be read as a stand-alone.

I rarely light up the 5th star, but I was tempted to do it here. It was just a masterful story to cap off a memorable trilogy.