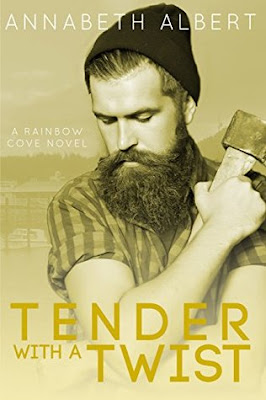 One kinky wood carver. One younger chef looking to try new things. A series of lessons that bring both men more than they bargained for…

Curtis Hunt has made a name for himself as a chainsaw wood carver, winning national competitions and operating a small business in Rainbow Cove, Oregon. As winter whittles away his tourist traffic, his goal is just to survive the season and try to not get lost in grief for his dead lover. It’s been two years, but he’s sure he’ll never be over the love of a lifetime. However, his body has a certain restlessness that he doesn’t quite know how to calm.

Logan Rosner knows a thing or two about restlessness. It’s what drove him to Rainbow Cove to be a chef at a bar and grill run by his friends. And it’s what drives him to a single sizzling encounter with the local legendary lumberjack. Both men get far more than they expected and learn that first impressions aren’t always accurate…

But when Logan proposes a series of sexy lessons, Curtis must decide how much he’s willing to risk. He knows he can’t afford to get attached to Logan’s good cooking, his easy smiles, or his caretaking, but he keeps going back for more, even as deeper emotions become involved. Soon, Curtis must decide whether to risk his heart again or risk losing Logan for good.

I liked the first book in the Rainbow Cove series, but I LOVED this one. Tender with a Twist is one kinky, emotional ride. Logan and Curtis are everything together!

While Curtis and Logan connect sexually first, they can't deny their relationship runs deeper than a surface attraction.

Logan has wanted to explore his dominant side for years, but his ex made vanilla look like an exotic flavor. Now that he's moved away from his helicopter parents, Logan wants to be his authentic self, which includes cutting his hair, growing a goatee, ditching the preppy outfits, getting a tat or two, and learning how to be the best Dom possible.

Since the death of his long-term partner, Curtis hasn't been living but existing. He has his wood carving, a couple friends, but he's just going through the motions. Known for his eccentric ways, Curtis is stagnant. He thinks of Logan as a "kid" to keep him at arm's length. He doesn't want to admit the power Logan has over him.

The men believe in each other. Logan supports Curtis at a wood-carving festival, and Curtis wants Logan's restaurant to succeed. Other people, particularly Logan's ridiculously controlling parents who treat Logan as if he were 13, not 27, interfere, but ultimately love is stronger than fear.

I wanted to believe that he was mine, really mine. My heart. My soul. My man.


This is not a fluffy story, but it's not super angsty either. The relationship evolves naturally, and both men are mature enough to eventually acknowledge their feelings and leap into "life's spring" together. The HEA is ever so hopeful, full of sunbeams and warmth.

P.S. We meet both Logan and Curtis in the first book, but I think Tender with a Twist can be read as a standalone.