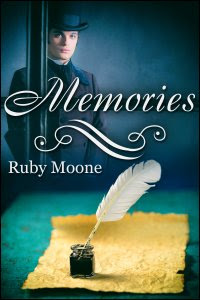 
Will Marsden is a man on the run from his memories and his past. Steward of Denton Manor was a good position until Captain Dearne, the owner, lost the manor on the turn of a card. When the feckless Dearne is dumped unconscious and near death on his doorstep, Will grudgingly accepts an enormous sum of money to care for him.

When nightmares drive Dearne into Will’s arms every night, the attraction between them explodes. As Dearne battles with lost memories, he is forced to accept the fact that someone in his family wants him dead, and Will is forced to confront his past head on. Will the revelations uncovered tear them apart?

I knew I would like this book right from the first page.

To be honest, the book's title and the cover don't do it justice. Before starting it, I was nervous that it would be a disappointing historical romance and my standards for historical romance are high. "Memories" was also my first book from Ruby Moone, and I'm always nervous when I try a new author. However, the book was much better than I was expecting.

The writing was really good, very atmospheric and well done, even if the book's editing left much to be desired. I was drawn into the story from the start, and I liked how the romance developed slowly between the two MCs.

Mysteries in general don't interest me, but I don't think this book was particularly strong on the mystery front. I didn't mind at all, but it wasn't a heart-racing mystery or something very complex. There were a few odds and ends that I felt like weren't wrapped up well, but because I cared more about the relationship than the mystery, I didn't really mind these particular weaknesses.

The story swept me away, especially the aspects of the story that dealt with Will's past. I really liked how Will had to overcome a lot of personal obstacles during the story, and I felt like they were handled in a good way.

I think that "Memories" is a very good story that will please most historical romance lovers, even with it's flaws. It worked for me, and I wouldn't hesitate to read another story from this author.


** I received a free copy of this book from Signal Boost Promotions as part of the review tour. A positive review was not promised in return. **

Will returned with a bag and pulled out the salve and some more linen. He quickly washed and dried his hands, and then busied himself with unwrapping him, eyes firmly fixed on his thigh, although his hands felt a little unsteady. Dearne adjusted his shirt when his cock twitched at his gentle touch. Any budding arousal was swiftly truncated though when Will pulled off the pad of gauze, sending red hot agony through his entire body and Dearne couldn’t stifle yet another high-pitched shriek.

“Sorry, sorry…” Will put his hand on Dearne’s arm and held on tight whilst he brought his breath under control. He hardly dared look at his leg.

“It’s not too bad,” Will said, so he peeled open one eye and squinted down. It was healing well. He presumed the pain was simply from dislodging the scabs. He breathed more evenly as Will dipped a cloth in the warm water that had been left in the rooms for them and bathed him. He relaxed fractionally.

“It is healing well,” Will said, drying him and then smoothing the salve over the wound. He replaced the old pad with a new one, then wound the makeshift bandage back around. “We could see if there is a physician in the town? Perhaps you should see someone who knows best how to deal with injuries.”

Dearne shook his head. “It is doing just fine. No need to involve anyone else in our escapade.”

Will smiled at that. “We have a couple of hours before we eat. Why don’t you sleep.” Dearne watched Will fold the old bandages and then wash his hands again. When he turned around and looked at him, lying on the bed with no breeches or smalls, he felt oddly exposed and for some reason, that excited him. Beneath his hand his cock hardened. He let himself relax against the pillow and watched Will’s jaw tighten and his eyes become fixed to his groin where he still cupped himself beneath his shirt. His whole body flushed as a surge of need tightened his skin. Will felt it too, judging by the bulge in his breeches.

Will opened his eyes, those beautiful dark eyes, and Dearne was shocked to see misery in them. “You know what I mean.”

“Yes, wrong. I can’t go through all that again. I can’t.” He turned away and picked up his bag. “I’ll see you for dinner.”

He paused momentarily by the door as if he would respond, but then yanked it open and left. Dearne flopped back on the bed and groaned.

Will sat on the edge of his bed. His whole body trembled. He held his hands before him and watched them shake before jamming them under his armpits and rocking. His heart was pounding as though it might burst out of his chest and fierce longing made his entire body ache. He screwed his eyes closed and willed the need to go away, tried to think of sad things, horrid things, the pain, the shame, but all he could see was Dearne laid on the bed, hand on his cock. Those long, strong legs finely dusted with hair, that watchful smile that crept out at odd moments, and his eyes. Christ, his eyes. Ever since the morning they had woken and, half asleep, he had kissed Dearne’s shoulder, run his tongue over those freckles that sat like gold dust on his skin and he had begged him for more, all he could taste was Dearne’s mouth. All he could feel now was Dearne’s mouth. All he wanted was Dearne’s mouth.

He wrapped his arms around his middle and bent over until his head almost touched his knees and barely recognised the keening sound that came from his mouth as everything threatened to spiral out of control.

He didn’t hear the door open, he didn’t hear Dearne until he sat beside him and put an arm around his shoulders. And try as he might, he didn’t resist when Dearne pulled him into his arms. They sat, side by side, with Dearne holding him awkwardly, and Will pressing his head onto Dearne’s shoulder and gradually the trembling subsided.

“I don’t suppose you want to talk about it?” Dearne said.

Will glanced up and Dearne offered him a crooked smile.