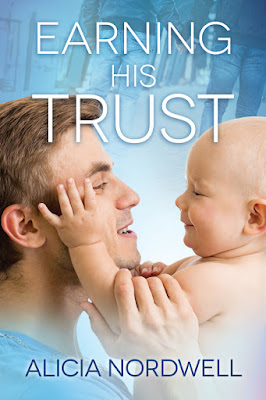 Evin lost the only two men he ever loved. But he might get a second chance with one of them—if he’s willing to take the risk.

Following the death of his husband, Evin is living in Portland and raising the infant son they had through a surrogate. Six-month-old Micah is his life, and if it means no time for activities or friendships beyond his minuscule support network, that’s a sacrifice Evin is willing to make. When he suffers a burn baking teething biscuits, the last person Evin expects to encounter in the ER is Ben, his lover from college—and the man who left him without a word of explanation.

Ben knows it won’t be easy to earn Evin’s trust and prove he’s not the same man Evin once knew, but he can’t bear to watch Evin struggle to care for Micah, hurting and alone. He wants back in Evin’s life, as a friend and hopefully more, but Evin’s heart is fragile, and the years have changed him too.


The curtain slid on the overhead rails, and Evin held in his urge to snap about how long it took to get to him when the nurse said the ER was slow, but he froze with his mouth open.
“Hello, I’m Dr. Perez. I see you burn—” The doctor snapped his jaw shut and stopped before he reached the head of the bed. Micah was oblivious, sitting between his legs and playing with his fake keys, chewing away on the rubber tips and drooling. He clutched the soggy remains of a biscuit in his other hand.
Evin had to swallow hard himself. Of all the hospitals, in all the cities, his old boyfriend had to be in this one.
He looked… good. Older, some wrinkles at the corners of his eyes. It had been… how long since he’d seen him? Not since Ben was graduating medical school the same year Evin was graduating with a business degree. Evin certainly never expected to see him here, and by the shocked look on Ben’s face, he hadn’t known Evin lived in Portland either. Evin waited for Ben to say something else, but he just kept staring. Evin took a deep breath. He could be an adult. He was a dad now.
“Burned my hand,” he finished the sentence Ben never did. “I did it about an hour ago, and it really hurts.” Maybe he could move this along. Plus, Micah was on his third biscuit and getting fussy again. He probably needed to be changed, have some lunch, and then would fall asleep for the afternoon, just so he could keep Evin up all night again.
Ben dropped his gaze to Micah and then looked up to stare at Evin again. “What happened to you?”
Did he mean how Evin probably looked like he’d aged at least ten years since Ben bailed right before graduation, the last night they’d spoken? Well, spoken wasn’t a very good description for the fight they’d had after weeks of Ben ducking Evin’s questions about what he was planning. Maybe their relationship had run its course; maybe it was better for them not to be together.
But he’d never expected Ben to just up and leave. It’d been hard, but Evin had a job offer in Portland and he’d taken it. Fortunately, his best friend, Gianna, came with him, and they got an apartment together in a not-so-great area of Happy Valley. It’d been nice to have a friend he knew would stick by him, but then she met Carl, and they fell in love. Not long after that he met someone, but that had gone wrong too.
Gone was the bright, glittery guy who lit up the room in a flash, and this version of himself was all Evin knew how to be anymore. It was probably a disappointment. His hair was cut short instead of hanging down to his shoulders, and he was in a blue T-shirt and a pair of gray sweats instead of skintight everything. Nothing at all like how Ben would remember him.
Was he wondering how in the hell Evin had a kid, since he’d never even kissed a girl—at least before when Ben knew him? Probably.
Or had he brushed off their history, leaving Evin as the only one thinking about how the years had changed them—Ben definitely for the better. Most likely, he meant how Evin got the burn. He was a professional after all, and Evin was probably just another patient to him.
In the end, it didn’t really matter. His appearance, how he got hurt, it all came down to just one thing.
“Teething.”

Evin’s son, Micah, is a huge part of the story. Unfortunately, the little guy suffers from some allergies to gluten and dairy that make it hard to buy any pre-made food. So Evin makes it. Burning his hand while baking some teethers is actually how he runs into Ben, his old college boyfriend, and leads them on their journey in this second-chance romance.

As a mom of two, I went through the ups and downs of buying baby food—the higher cost for the convenience of pre-packaged food to the constant use of carrots in everything turning my daughter’s face orange. With my son, I was home with both kids, and I decided to make all his food myself.
Wow, what a wake-up call that was! He was a much better eater, fresh or frozen fruits and veggies were cheaper to buy and puree myself, and I could easily freeze a week’s worth of food in just a few hours. And I loved baking for them, but when we got together with friends, we had to accommodate allergies, so I started researching.
I thought I’d share my favorite recipe for gluten and dairy free cookies that inspired the recipe Evin was using for Micah’s teether treats!

Gluten- and Dairy-free Teething Biscuits
Preheat oven to 275 degrees. Mix all ingredients together into a stiff dough ball. Pat out into a rectangle about 1/4 inch thick on parchment paper or non-stick baking mat on baking sheet. Cut into convenient sizes for baby’s hands and separate slightly to improve baking.
You want these to get dry and hard! Bake for 1 1/2 to 2 hours. Cool completely before serving. These can be stored in an airtight container in the freezer for a cold, hard snack perfect for your baby’s teething needs!

The number one question folks ask Alicia when she shares she's a MM romance author: "Why gay fiction? Why write men when you're a woman?" and her answer is: "Why the hell not!" Alicia Nordwell is one of those not so rare creatures, a reader turned writer. Striving to find an interesting story one day, she decided to write what she wanted instead. Then the voices started... Yep, not only does she talk about herself in the third person for bios, she has voices in her head constantly clamoring to get out. Fortunately, with the encouragement of her family and friends, she decided for her own sanity to keep writing.

Now you can find her stories both free and e-published. When she’s not on the computer typing away, she's a wife and a mom of two in the dreary, yet ideal for her redhead complexion, Pacific Northwest. Except for when she disappears into one of the many worlds in her head, of course! She can also be found quite often at her blog, where she has a lot of free fiction for readers to enjoy or working hard, or maybe hardly working, as an admin on GayAuthors.org under her online nickname, Cia.