Blog Tour: Hot Off The Ice by A.E. Wasp

HOT OFF THE ICE


Meet the men of the Seattle Thunder.


They're hot on and off the ice. 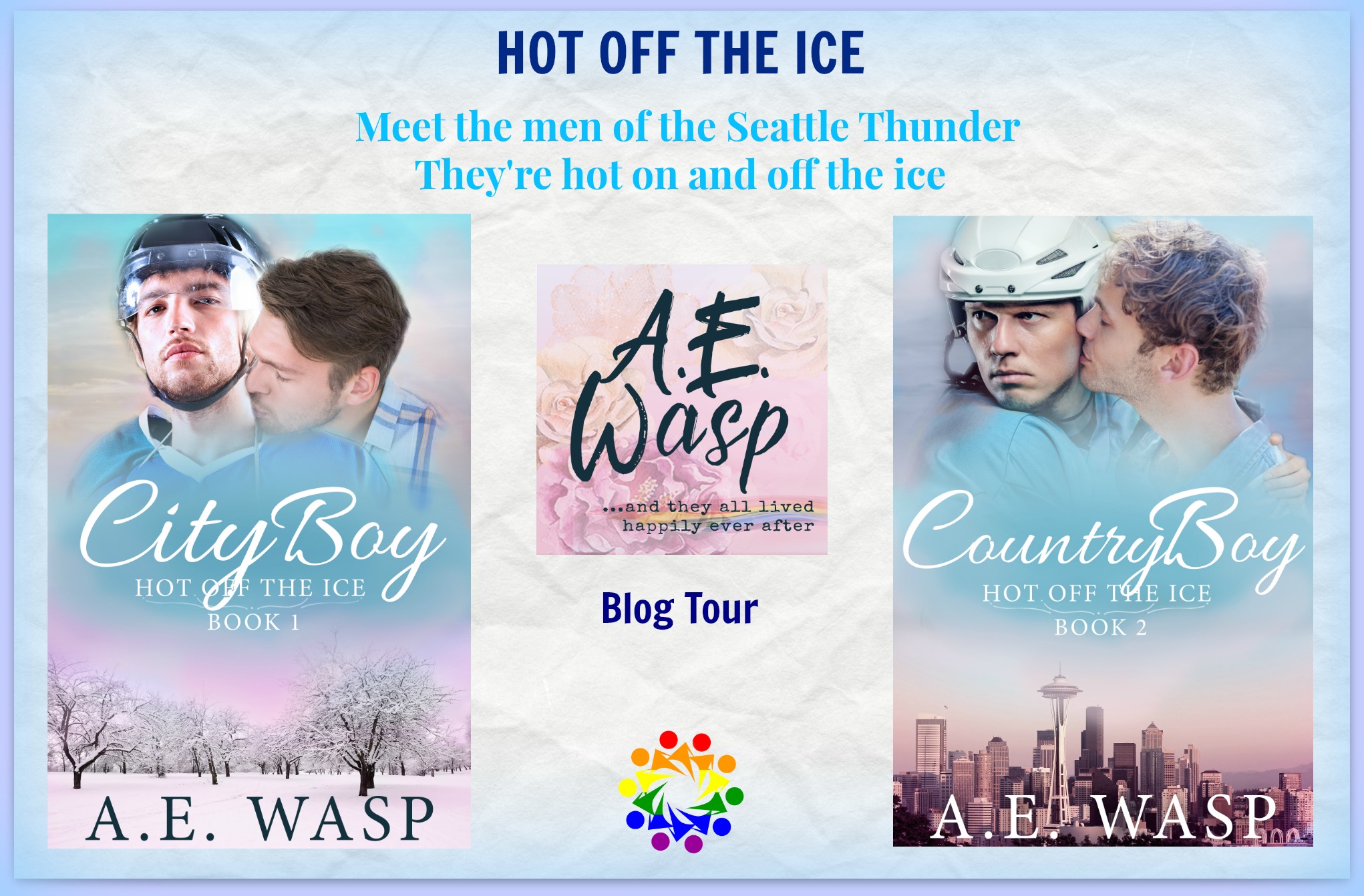 Sometimes the toughest thing to have faith in is yourself.

The first time Paul Dyson met Robbie Rhodes, they ended up naked in Robbie’s bed. The last time they met, on the ice the morning after, Paul punched Robbie in the face and called him something he’d rather not repeat.

Being gay is wrong, unnatural, and there is no room for them in his world. Paul’s heard that his whole life. So when it hits him that he is gay, he does the only thing he can: he shoves himself so deep in the closet he would need a map to find his way out again.

When the chance to fulfill his lifelong dream comes along, Paul can’t say no, even if it forces him to share hotel rooms with the only man he can’t resist. It doesn’t take long for Paul to give into temptation and find himself falling in love with his brilliant, caring teammate.

But as much as he cares for Paul, Robbie is finding it harder and harder to justify hiding who he is. It goes against everything he was taught was right. He feels like he has a duty to come out to the public. He’d be the first out gay pro-hockey player.

If Paul wants to be with Robbie, he will have to turn his back on his family and everything he’s believed in. If Robbie wants to be will Paul, he’ll have to do the same.
It’s going to take them a lot of faith to find their way together in this shiny new world.

Country Boy is a love story about figuring out who you are, who you want to be, and how to get there. It contains sweet hockey plays, a 1976 Corvette Stingray, fancy underwear, and the journey of a lifetime. 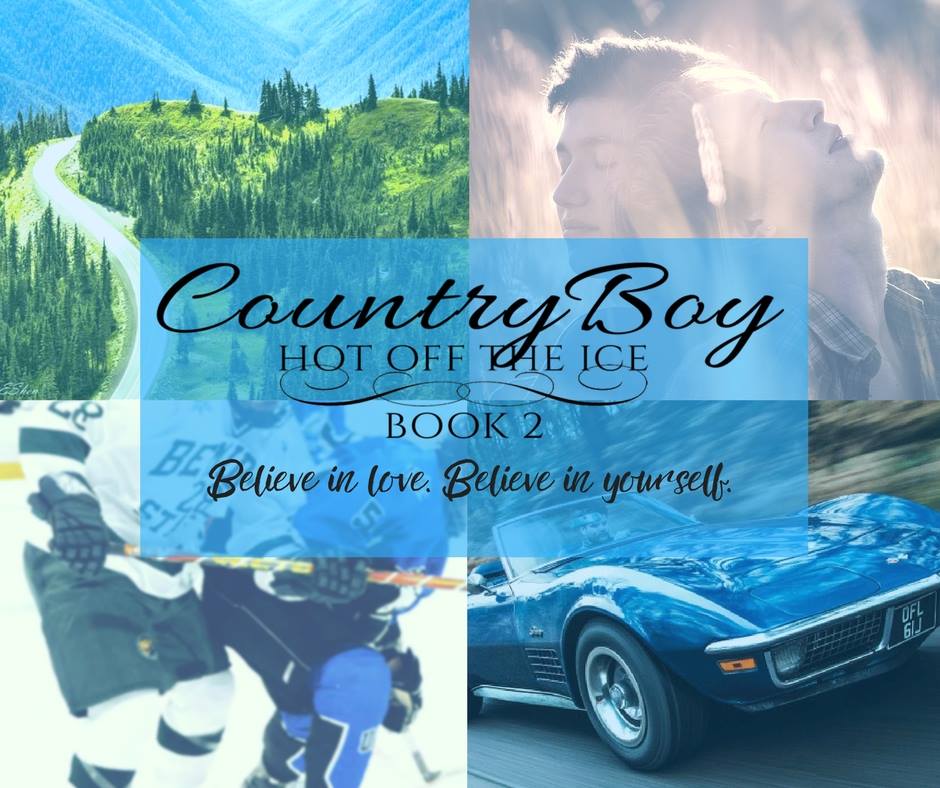 
Shivering, he went in the living room in his boxers. Robbie’s blankets looked warm, and Paul wondered if Robbie would mind if he wrapped one around himself to warm up. He sat tentatively on the edge of the folded down futon and ran his hands over the soft comforter, an oddly intimate gesture.
Robbie raised one eyebrow when he caught sight of Paul sitting nearly naked on his futon. “Mr. Dyson, I’m not that kind of a boy,” he said archly. He threw a pair of pants and a gray t-shirt at Paul.
Blushing, Paul shook out the clothes. The shirt was a Bemidji Chargers’ t-shirt with Robbie’s last name on the back. He held it up and made a face.
“Tough luck,” Robbie said with a laugh. “It was the only clean shirt I had left. Count your blessings.”
Paul tried to hide his trembling hands as he pulled on the shirt and sweatpants. All he could think of was how kissing Robbie had made him feel. His lips tingled, raw from the cold, the pressure, and the scrub of Robbie’s end of the day stubble.
He was twenty-two years old, had been with more than a few girls, but he felt like a fourteen-year-old virgin.
Sure, it wasn’t quite his first experience with a guy. He pushed that memory down deep. Six-feet-deep.
But even that time hadn’t been like this. Lending a friend a hand in the middle of the night was one thing. But kissing? Especially kissing like that? Soft and sweet? The kind Paul secretly ached for? That was gay.
And so, apparently, was Paul, despite how often he had prayed to God not to be. Evidence A? He wanted to kiss Robbie again, right now. So, how could he make that happen?
Suddenly Robbie was up in his space, a hand on his chest, pushing him down to the futon. “I lied. I am that kind of a boy.” He climbed onto the mattress, straddling Paul’s lap.
Oh. Okay. Paul’s heart jack-rabbited as he swung between terror and elation. He lay there, eyes wide and arms gripping the comforter that was as soft as he’d thought it would be.
Everything he was feeling must have shown in his eyes, because Robbie stopped, his palm flat against Paul’s chest. The grin slipped from his face. “Are you okay?”


Paul nodded quickly.
Robbie didn’t look convinced. “Are you sure? It’s okay if you want to stop. I won’t kick you out or anything.”
Tentatively, Paul reached up and laid his hands on Robbie’s thighs where they rested on either side of his body. His muscles were hard as rocks under the soft fabric of his sleep pants. Paul couldn’t resist digging his fingers into them. “No,” he croaked. “Don’t stop.”
Robbie curved down over Paul, his face inches from Paul. “Do you really want to kiss some guy from BSU?”
“Yeah, I really do,” Paul said seriously. He might never get up the nerve up to do this again. If one night was going to have to last him a lifetime, he wanted to feel everything. “I want to do everything.”


“That’s a tall order,” Robbie whispered, slipping his hands beneath the shirt Paul wore. “I’ll see what I can do.”

When a blown tire leads directly to mind-blowing sex with a white knight named Dakota, pro-hockey player Bryce Lowery discovers he is most definitely gay.

Being with Dakota opens up a whole new world. Bryce can’t imagine life without him. But he refuses to be Bryce's dirty little secret. If he wants to keep Dakota, he’s either going to have to come out publicly or retire and walk away from millions of dollars.

Bryce Lowery feels like the answer to all of Dakota’s prayers. But is Dakota willing to leave the only life he’s ever known only to be thrust into the spotlight as the boyfriend of the first out gay hockey player? Would their relationship even survive it? He’ll lose Bryce if doesn’t because Bryce will leave eventually. No one would turn down millions of dollars for a nobody with nothing.

City Boy is a first time gay, fish out of water, May/December love story with a happy ending. It features snarky siblings, a dirty-talking farmer, lots of food, and big choices. (No poultry was harmed in the making of this book.)

Author Bio: A dreamer and an idealist, Amy writes about people finding connection in a world that can seem lonely and magic in a world than can seem all too mundane. She invites readers into her characters’ lives and worlds when they are their most vulnerable, their most human, living with the same hopes and fears we all have. An avid traveler who has lived in big cities and small towns in four different continents, Amy has found that time and distance are no barriers to love. She invites her readers to reach out and share how her characters have touched their lives or how the found families they have gathered around them have shaped their worlds.

WIN ONE OF THREE e-copies from A.E. Wasp’s Backlist


Stories That Make You Smile