Author Of The Month - Brent Hartinger - Week One

Welcome to our first week celebrating the fabulous

In our first post, we'll take a look at the Russel Middlebrook series, plus Brent's favorite things. There's also a chance to win one of his book, all the way at the bottom. 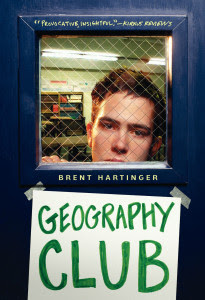 I knew that any wrong action, however slight, could reveal my true identity...

Russel is still going on dates with girls. Kevin would do anything to prevent his teammates on the baseball team from finding out. Min and Terese tell everyone they're really just good friends. But after a while, the truth's too hard to hide - at least from each other - so they form the "Geography Club." Nobody else will come. Why would they want to? Their secret should be safe.

Chapter One
I WAS DEEP BEHIND ENEMY LINES, in the very heart of the opposing camp. My adversaries were all around me. For the time being, my disguise was holding, but still I felt exposed, naked, as if my secret was obvious to anyone who took the time to look. I knew that any wrong action, however slight, could expose my deception and reveal my true identity. The thought made my skin prickle. The enemy would not take kindly to my infiltration of their ranks, especially not here, in their inner sanctum.
Then Kevin Land leaned over the wooden bench behind my locker and said, “Yo, Middlebrook, let me use your shampoo!”
I was in the high school boys’ locker room at the end of third period P.E. class. I’d just come from the showers, and part of the reason I felt naked was because I was naked. I’d slung my wet towel over the metal door of my locker and was standing there all goosebumpy, eager to get dressed and get the hell out of there. Why exactly did I feel like the boys’ locker room after third period P.E. was enemy territory—that the other guys in my class were rival soldiers in some warlike struggle for domination? Well, there’s not really a short answer to that question.
“Use your own damn shampoo,” I said to Kevin, crouching down in front of my locker, probing the darkness for clean underwear.
Kevin stepped right up next to me and started searching the upper reaches of my locker himself. I could feel the heat of his body, but it did nothing to lessen my goosebumps. “Come on,” he said. “Where is it? I know you have some. You always have shampoo, just like you always have clean undies.”
I had just found my Jockey shorts, and I was tempted to not give Kevin the satisfaction of seeing he’d been right about me, but I was cold and tired of being exposed. I sat down on the bench, maneuvering my legs through the elastic of my underwear, then pulled them up. I fumbled for the shampoo in my backpack and handed it to Kevin. “Here,” I said. “Just bring it back when you’re done.” Kevin was lean and muscled and dark, with perfect sideburns and a five o’clock shadow by ten in the morning. More important, he was naked too, and suddenly it seemed like there was no place to look in the entire locker room that wasn’t his crotch. I glanced away, but there were more visual land mines to avoid—specifically, the bodies of Leon and Brad and Jarred and Ramone, other guys from our P.E. class, all looking like one of those Abercrombie & Fitch underwear ads come to life.

Second in the series, The Order Of The Poison Oak 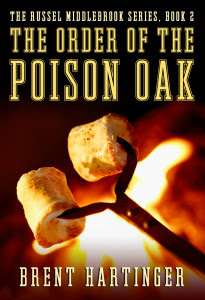 Summer camp is different from high school. Something about spending the night. Things happen.

Geography Club's Russel Middlebrook is back, and he and his friends are off to work as counselors at a summer camp. Brent Hartinger's third novel is the story of Indian legends, skinny-dipping in moonlit coves, and passionate summer romance. It's also the story of Russel's latest club, The Order of the Poison Oak, a secret society dedicated to helping its members see life's hidden beauty, and accept its sometimes painful sting.

Out in the lake, Web did a surface dive, and I took the opportunity to slide into the water. I’d expected it to be cold, but it wasn’t. It felt warm. I’d never swum naked before, and it felt strange—good-strange, not weird-strange. It was like I was being touched all over, even in places where I was definitely not used to being touched.
In fact, it felt a little too good. Those places where I wasn’t used to being touched? Suddenly, I had the opposite problem from the one I’d had back on the beach.
Web surfaced not five feet from where I was floating. I started in surprise.
“Whaddaya think?” he said, his face shimmering.
“Huh?” I said. “Oh, it’s good. It feels really good.”
Suddenly, he submerged again. He’d been facing me when he went under, so there was only one direction for him to go.
“Wait,” I said.
And then I felt him down below, brushing against me. At least I thought it was him. It could have been some kind of lake creature, which I wouldn’t necessarily have objected to, because then it would have been the creature, and not Web, that had felt me there.
Web surfaced again, behind me now. “Hmmmmmm!” he said. “I’d say you think the water feels good, huh?”
Okay, I thought. This was no innocent after-hours swim. Web was hitting on me!
I’d waited my whole life for this moment. I wasn’t going to screw it up, not again.
I paddled around to face him. “Sure does,” I said. “How does the water make you feel?”
He grinned, and the moon glistened in his eyes. “Pretty good. Pretty damn good.”
Was this really happening? Was I really doing the whole skinny-dipping/weird flirtatious thing with Web Bastion?
“It almost feels like there’s someone touching me,” I said. “Down there.”
He floated closer. “I feel that too, man.”
“Do you?”
“Yeahhh,” he whispered. “And it feels soooo good.” He was less than two feet from me now. The water was lapping at my neck, and I could feel his breath on my face, even wetter than the lake.
He floated closer still—a foot away. We were almost bumping chests.
And that’s when I finally remembered something I had momentarily forgotten: whether Web was gay or not, he was now the boyfriend of my best friend!
“Wait!” I said suddenly. “What about Min?”
Web ignored me, just leaned forward and kissed me on the lips.

So Web was kissing me, and it’s not like I could not kiss him back. That would have been rude. Yes, he was seeing my best friend, so on one level this wasn’t right. But I’d made myself a vow that I wouldn’t let an opportunity like this pass me by. Remember? Scarlett O’Hara? Raised fist? And this was the Fort Knox of golden opportunities. So breaking that kiss wouldn’t have been right either—right?
I was tingling all over. I could feel every single nerve ending in my entire body, and each one was on red alert—some more alerted than others!
We were still kissing when I felt his arms slip around me, exploring, but also drawing me close, sucking me in. I’d been seduced by a merman or an octopus, and Min or no Min, I was powerless to escape.
Suddenly, my body was pressing against his, slick and warm and hard, and that’s when I really knew we were skinny-dipping. There was absolutely nothing coming between Web and me now.


And then he ducked under the water again. Only this time, he did more than brush me with his hand. 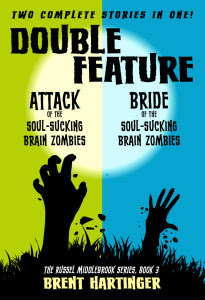 It's a horror-movie extravaganza in this, the second sequel to Brent Hartinger's Geography Club. Two complete books in one recount the stories of best friends Russel and Min who sign up to be extras on the set of a zombie film and learn that there's nothing scarier than high school romance.

But beware! Russel and Min's separate stories affect each other in surprising ways, and you'll have to read both books together to find out the whole story.

(This book was previously published under the title Split Screen)

And fourth in the series, The Elephant Of Surprise 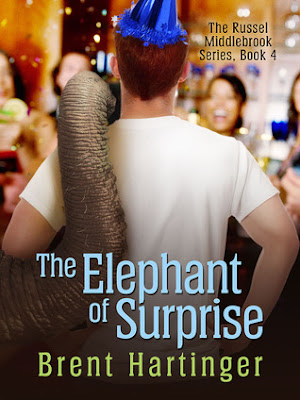 People aren't always what they seem to be. Sometimes we even surprise ourselves.

So discovers seventeen-year-old Russel Middlebrook in The Elephant of Surprise, a stand-alone sequel to Brent Hartinger's landmark 2003 gay young adult novel Geography Club (which has now been adapted as a feature film co-starring Scott Bakula and Nikki Blonsky).

In this latest book, Russel and his friends Min and Gunnar are laughing about something they call the Elephant of Surprise -- the tendency for life to never turn out as expected. Sure enough, Russel soon happens upon a hot but mysterious homeless activist named Wade, even as he's drawn back to an old flame named Kevin. Meanwhile, Min is learning surprising things about her girlfriend Leah, and Gunnar just wants to be left alone to pursue his latest technology obsession.

But the elephant is definitely on the move in all three of their lives. Just who is Wade and what are he and his friends planning? What is Leah hiding? And why is Gunnar taking naked pictures of Kevin in the shower?

BRENT HARTINGER is the author of fourteen novels, including Three Truths and a Lie (Simon Pulse, 2016), which was nominated for an Edgar Award; and Geography Club (HarperCollins, 2003), which was adapted as a feature film in 2013, co-starring Scott Bakula, and is now being developed as a television series. Brent is also a screenwriter, and eight of his screenplays have been optioned for film; four are currently in various stages of development.

Brent’s writing honors include being named the winner of the Lambda Literary Award; a GLAAD Media Award; an Edgar Award nomination; the Scandiuzzi Children’s Book Award; the Screenwriting in the Sun Award, and a Writers Network Fellowship.

Hartinger is the co-host of the Media Carnivores podcast; a sometime-member of the faculty at Vermont College in the MFA program in Writing for Children and Young Adults; and the co-founder of the entertainment website AfterElton.com, which was sold to MTV/Viacom in 2006 (in a multimillion dollar deal). Brent lives in Seattle.

Thanks for joining us to celebrate this amazing author. Come back next week for more of Brent's book, five little-known things about Brent, plus another chance to win!