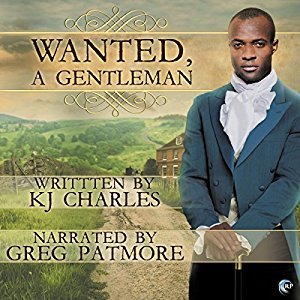 WANTED, A GENTLEMAN  Or, Virtue Over-Rated

the grand romance of

Mr. Martin St. Vincent . . . a Merchant with a Mission, also a Problem

Mr. Theodore Swann . . . a humble Scribbler and Advertiser for Love

the offices of the Matrimonial Advertiser, London where Lonely Hearts may seek one another for the cost of a shilling

a Pursuit to Gretna Green (or thereabouts)

In the course of which are presented

the particulars of which are too numerous to impart

This one's definitely a little bit on me...

I was really looking forward to this one. I've heard some really good things about KJ Charles and I've only had the chance to read a couple of short stories by this author but I admit I really liked them. My only reservation here was that the stories a historical and that's not always a winning genre for me but when I like it I usually really, really love it...Joanna Chambers' 'Enlightenment' series...love it! J.L. Hawk's Griffin and Whyborne series...again love it! And that's about it for me and historical books in the M/M genre so...I'm a pretty tough sell in this area.

Even though I didn't feel totally wowed with this one. I found a lot of stuff in this one. I like the pacing of the story. Both Martin and Theodore were both likable and interesting characters. The story was definitely interesting and while it wasn't what I would call riveting, it definitely held my attention.

'Wanted a Gentleman' takes place during the early 1800's in England. Theodore runs a local paper called the Matrimonial Advertiser and needless to say the name of his paper pretty much says it all. It's the 1800's version of 'OkCupid' or 'Match.com' open a profile or in this case place an add and see what happens. It's also the perfect way for lovers to pass messages back and forth as Theo finds out when a rather irate Martin appears in his offices one day demanding information about a certain add. Martin St. Vincent is a freeman and a respected merchant who is in search of a young lady at the request of her parents. He's determined to find the girl and return her home before anything untoward should happen to her and if this means conscripting a less than willing Theo to aide him...so be it.

While Theo at times appears to be a less than willing participant in this grand chase, his reasons are not readily apparent and as their journey progresses Theo's reluctance seems to fade at time but it's the reasons for his reluctance that may end things between these two men before they truly get a chance to begin.

For me this was  one of those times when I just didn't fully connect the story and really haven't been able to fully define why. But I did find that there were two things about this audio book that definitely contributed to holding my attention and making me want to hear the entire story.

The first was the authors writing style. I liked it and found that I'm definitely open to the idea of reading more of their books...of which I thankfully have several.  One of the things that will put me off of an historical novel really quickly is when the author's writing doesn't feel like it fits the period that they're writing about and for me that was not a problem with this story as it was the authors writing style that drew me in allowed me to envision the setting and time frame effortlessly.

The other thing that worked incredibly well for me was the the narration of Greg Patmore. I felt that he did a wonderful job of capturing both the voices of the characters and the time in which they lived as much as the authors writing style Mr. Patmore's delivery of this story was a big plus in getting and holding my interest.

'Wanted a Gentleman' may have only been a 3 star audio book for me but as well as entertaining me for nearly 5 hrs, it was also a pleasant reminder that I have yet another talented author whose books need more of my attention and it introduced me to a new narrator that definitely bares further investigation...so all in all it's a 3 star book that did it's job well.

An audio book of 'Wanted, A Gentleman' was graciously provided by the publisher in exchange for an honest review.

Buylinks are provided as a courtesy and do not constitute an endorsement of  or affiliation with this book, author or booksellers listed.