Audio book Review: All In by Ava Drake 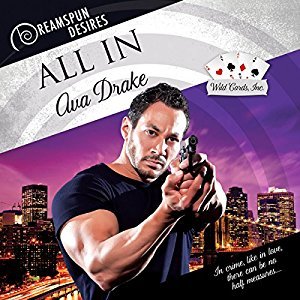 
In crime, like in love, there can be no half measures….

Fashion model Zane Stryker needs money—badly. At almost thirty, his glory days are behind him, and he needs capital to start over. When his luggage is switched with a bag containing contraband he’s forced to deliver, it’s either the worst thing that’s ever happened to him… or the best.

Enter Sebastian Gigoni, formerly of the British Special Forces, who has to decide just where Zane’s loyalty lies and why. Sizzling attraction erupts between them, but that doesn’t mean they can trust each other. They double down in a race for their lives—and their love—but are their purposes at odds? As they struggle to reconcile their goals, their consciences, and the needs of their hearts, one thing is clear—they must go all in or give up altogether.

'All In' is the third book in Ava Drake's 'Wild Card's' series and the 38th book in Dreamspinner's 'Dreamspun Desires' and I have to admit I wasn't exactly 'all in' on this one.

I liked the story line well enough. Zane Stryker is a fashion model who's career is on the downslide now that he's fast approaching 30 and with his return to New York he's hoping to score some runway jobs that will fund his retirement. What he's not hoping for is what happens and that's getting detained at customs with a suitcase devoid of his clothes and containing contraband of unknown origins and  a handsome but strange man demanding that he trust him if Zane wants to get out of the mess he's suddenly found himself in.

Sebastian Gigoni is retired British Special Forces and when he's asked to retrieve Zane and the contraband suitcase from the airport what he doesn't count on is the complications that are involved...things like trying to figure out where Zane's loyalties lie and what to do with the attraction that seems to be developing between the two men.


At just over 6 hours of listening time this story moved right along and as I said I liked the story. I actually really liked Sebastian too. He was a bit of a mystery man and much to Zane's disappointment not the gullible fool that Zane needed him to be and for some reason that I couldn't fathom he seemed to be attracted to Zane and there you have it...the fly in my ointment...Zane.

In a nutshell I did not like Zane. I found him to be shallow, self absorbed and just generally full of himself. I honestly had no clue what Sebastian saw in him and try as I might I never really felt the connection between these two men. So while the story worked for me and I enjoyed  it the relationship between these two pretty much tanked.

While 'All In' was my first book by this author when it comes to the narrator this is not our first dance at the rodeo...John Solo was the narrator for this one and from the audio side of things it was solid. I liked his voices for the characters, they were solid and I got the clarity and emotional expression that I enjoy in an audio book. But still even this just did not help me to like Zane.

I admit it maybe I was just being a cranky pants when I listened to this one and another time I might like Zane, but in all honestly I doubt it. Zane's just not my cuppa' and I don't honestly see that changing any time soon.

An audio book of 'All In' was graciously provided by the publisher in exchange for an honest review.