Audio book Review: Afraid to Fly by L. A. Witt 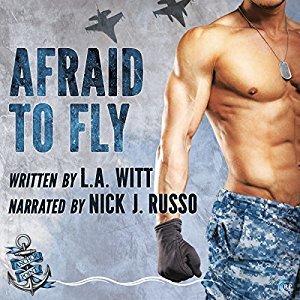 
Once a fearless fighter pilot, Commander Travis Wilson is now confined to a desk. It’s been eight years since the near-fatal crash that grounded him, and it still rules his life thanks to relentless back pain.

Lieutenant Commander Clint Fraser almost drowned in a bottle after a highly classified catastrophe while piloting a drone. His downward spiral cost him his marriage and kids, but he’s sober now and getting his life back on track. He’s traded drones for a desk, and he’s determined to reconcile with his kids and navigate the choppy waters of PTSD.

Clint has been on Travis’s radar ever since he transferred to Anchor Point. When Clint comes out to his colleagues, it’s a disaster, but there’s a silver lining: now that Travis knows Clint is into men, the chemistry between them explodes.

It’s all fun and games until emotions get involved. Clint’s never been in love with a man before. Travis has, and a decade later, that tragic ending still haunts him. Clint needs to coax him past his fear of crashing and burning again, or their love will be grounded before takeoff.

Take one L. A. Witt book about two men in the military and...
add the voice of...Nick J. Russo and you have the makings of several hours of pleasurable listening.

I've totally become a glutton for re-reading books via audio books and especially books that I really enjoyed reading the first time around that are being narrated by one of my favorite narrators as was the case with 'Afraid to Fly'. Having read this book when it was first released back in January, I have already reviewed this story and my original review still works for me so I'll post either the review or a link to it at the end of this one...once I'm done rambling about how much I enjoyed the audio book efforts of Nick J. Russo. 'Afraid to Fly' is book #18 in my list of Nick J. Russo audio books and like the 17 before it. It was a pleasure to listen to from start to finish.

I freely admit Nick J. Russo is one of my favorite narrators. I never fail to enjoy his audio books and without fail I come away from the experience having enjoyed the book even more. I love the depth and character that Nick J. Russo's character voices add to the story making it so easy just to close my eyes sink into the story, relax and enjoy myself.

The following is my original review...

Love with all it's dings and dents...

'Afraid to Fly' is the second book in L. A. Witt's series 'Anchor Point'. We were briefly introduced to Travis Wilson in 'Just Drive' the first book in this series as best friend of Paul Richards one of the MCs from that story.

In 'Just Drive' Travis encouraged Paul to take a chance on love and now it's Paul's turn to do the same for Travis. While the author didn't really tell us a lot about Travis in 'Just Drive' we were told enough to know that Travis deals with chronic pain and in 'Afraid to Fly' we are given a much clearer picture of just how bad that chronic pain is and insidiously it has invaded every aspect of his life. Along with the chronic pain Travis deals with PTSD and shares his home with his adult daughter who also deals with her own PTSD.

Clint Fraser works down the hall from Travis and he's got his own case of PTSD to deal with...one that's cost him a marriage and time with his 3 kids.

It's always interesting when I finish a book to reflect back on the why I did or didn't like a book. Sometimes, I'm not really sure why and it's just a case of the story worked and I connected with it sometimes there's something very specific that I liked or several things and in the case of 'Afraid to Fly' while there were several things that I liked about this story the number one reason was Travis. I connected with Travis. I totally understood what his life was like. As someone who also suffers from chronic pain, while thankfully mine is rarely as extreme as Travis's is. It does affect my daily life. So I understood what it was like to always be thinking ahead wondering can I do this? How much more will I hurt? How can I manage the pain? and on and on. It's just what you do and how you have to deal with things to try and have as normal of a life as possible. To keep as much independence as possible. I got this, I understood his mindset and I really got his insecurities about his and Clint's relationship and how much it meant to him to have someone who accepts him with all his 'dings and dents' just as Travis does with Clint and his PTSD and the fact that he's a 'recovering' alcoholic.

As well as how Travis's chronic pain and PTSD was dealt with how we saw Clint's medical issues, both the PTSD and the alcoholism dealt with for me was well done. It was an important part of the story but it never felt like it overpowered the development of their relationship but just like Travis's chronic pain and his own PTSD these were things that both men had deal with, it was all a part of the relationship dynamic.

For me 'Fear of Flying' was about finding that person you connect with, want to spend your life with and loving them not in spite of their 'baggage' but because it's a part of them and who they are and ultimately you come to know and accept that the love they have for you is as strong as what you feel for them.

An audio book of 'Afraid to Fly' was graciously provided by the publisher in exchange for an honest review.