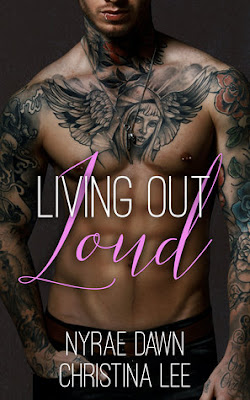 
Ben Emerson has lived by his minister father’s rules most of his life. Born into an ultra-conservative church community, he’s finally brave enough to break free and move to San Francisco. Distancing himself certainly helps create a new mindset, but living as an openly gay man takes some getting used to. When he reaches out to Xavier, a childhood friend who lives in the city, Ben isn’t sure how he’ll respond given their thorny history. Ben hopes the familiar connection will help him right some wrongs as well as provide the solace he’s been craving.

Xavier Ramos is who he is, and he doesn’t give a damn what anyone thinks. Whether it’s eyeliner, nail polish, tattoos or his love of hooking up, he uses his body as a form of self-expression but doesn’t let anyone get too close. When Ben reenters his life, Xavier helps him experience the city and feel comfortable in his own skin. Seeing the world through Ben’s eyes, he begins to wonder if he’s also not living as freely as he thought.

When Xavier challenges Ben’s beliefs about sex, it becomes explosive—for both of them. Xavier breaks apart Ben’s sheltered world and shows him what it’s like to live out loud. The more time they spend together, the more Xavier begins to long for Ben in a different way—one that both surprises and scares him. But real life doesn’t fade into the background, so when Ben’s past comes knocking, old habits are hard to break. Testing the foundation of their deepening connection will take a trust that will either bind them…or tear them apart.

If you read Paint the Stars, the third book in the Free Fall series, you may remember Ben. He's Ezra's ex, the one who walked away, the one who attempted to reconcile with Ezra as if he hadn't ripped out Ezra's heart and stomped on it for good measure.

Ben is the child of a preacher and his devout wife. Ben's parents loved him ... but not all of him. When they discovered Ben was gay, they attempted to pray the gay away, and when that didn't work, they sent Ben to the horror that is conversion therapy.

Reading about what happened to Ben made me sick and angry, so angry that this kind of therapy is legal, that a parent could do something so brutal and cruel to their child.

Ben is a good person: gentle, shy, and sexually repressed, the very opposite of his childhood friend Xavier, who with his piercings and tats, personifies sexual abandon. Xavier is free and open. He has pre- and post-bang kits; he's considerate like that, even to his random hook-ups.

Ben and Xavier bring out the best in each other. Their relationship develops naturally from friends who experiment to lovers who share a deep, abiding connection. When Ben unexpectedly has to return home, Xavier is scared that Ben won't come back; after all, Ben left Ezra. Why wouldn't he leave Xavier?

Living Out Loud is a the best of kind of friends-to-lovers book: tender, relatively low angst (particularly considering the nightmare that is Ben's past), and insanely SEXY. Xavier is determined to show Ben how good sexual "play" can be, and he is a wonderful teacher, always thinking about Ben's pleasure.

The last chapter is ALL THE THINGS. I dare you not to cry a little, not tears of sorrow but tears of JOY.

I climb onto [Xavier's] lap and place my hand against his battering heart. "This right here. This is home. Anywhere you are."

Books are mirrors. You only see in them what you already have inside of you.

An ARC of this book was provided by the authors in exchange for an honest review.