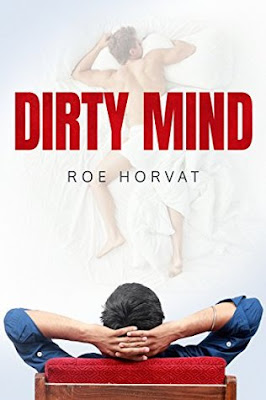 When his young friend and protégé Christian transfers to Freiburg for medical school, Alex is overjoyed…and terrified that Christian will find out about Alex’s indecent alter ego. The time they spend together, as lovely as it is, could overturn Alex’s carefully balanced life. Suddenly, the writing is not good enough, his hair seems to be thinning, his careful hookups leave him unfulfilled, and his dreams are haunted by the innocent young man he’s vowed to protect.

However, Christian is not a boy any more. He’s a grown man of twenty-one, clever and deadly attractive. And he’s hiding some secrets of his own.

While Dirty Mind doesn't pack the same emotional punch as Horvat's first book, The Layover, it's still a worthy contender in the MM romance genre. Horvat has a lyrical writing style that never comes across as flowery. Their (this is the pronoun the author uses) words are stark; the descriptions, emotive.

Dirty Mind is set in Freiburg im Breisgau in Germany. Can I get an AMEN, please? It's so refreshing to have books set somewhere besides the English-speaking world. Horvat is European, so they pull it off flawlessly.

Alex is the first-person narrator of this story, so we are intimately aware of his self-delusions. The reader can see how badly Christian wants to be with Alex, but Alex is determined to self-sabotage himself and preserve Christian’s precious virginity.

His biggest concerns is the twelve age difference between himself and Christian. He’s not willing to try, because he’s certain Christian will finally notice his receding hairline and leave. Alex’s stubbornness and insecurity were maddening! Christian wants inside Alex’s dirty mind, yet Alex pushes him away time and again.

The secondary characters in the story are pitch-perfect: Dieter, Christian’s dorm mate who is fascinated with all things gay and says exactly what he’s thinking; Christian’s controlling mother, who wants Alex to report on Christian’s comings and goings; Mattias, Alex’s one-time casual fuck buddy and also his best friend, who suffers from dark moods and has a backstory that was sadly never fully fleshed out.

The story ends with a fairly satisfying epilogue. Alex is still waiting for the other shoe to drop (“Christian, I’m terrified that one day, I’m not going to be enough for you”), but Christian holds firm. He branded himself Alex’s Squirrel, and he’s not letting go.