Spotlight: Lessons In Loving Thy Murderous Neighbour by Charlie Cochrane

Lessons In Loving Thy Murderous Neighbour 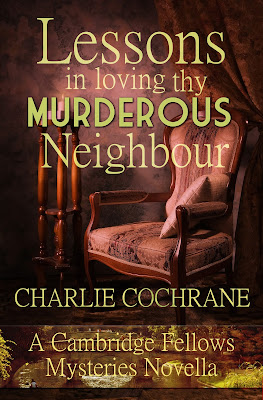 Jonty Stewart and Orlando Coppersmith like nothing more than being given a mystery to solve. But what happens when you have to defend your greatest enemy on a charge of murder?

Cambridge 1922
“Owens? Owens?” Orlando Coppersmith’s voice sounded louder, and clearer, from his chair in the Senior Common Room at St Bride’s than it had ever sounded before. And with good cause.
“Steady on, old man. We’re in enough of a state of shock without you making sufficient noise to wake the dead.” Jonty Stewart smiled at his friend’s uncharacteristic outburst. Although friendship would hardly be the most accurate way to describe their relationship. Even the description “lovers, companions, colleagues and partners in solving crime” didn’t quite cover the depth of the bond they’d build up in nigh on twenty years. If their hair bore the odd silver thread, their ardour hadn’t cooled.
“Wake the dead or, harder still, wake some of the dons,” Dr. Panesar agreed, mischievously.
“Good point, Dr. P.” Jonty sniggered. “Some of them give the impression they’ve been asleep since 1913.”
A quick glance around the oak panelled room supported his assertion. St. Bride’s may have been one of the most forward looking of the Cambridge colleges, embracing the fact the year was 1922 rather than pretending it was still 1622, but some aspects of the university, including crusty old dons, seemed to be an immutable fixture.


“In which case,” Orlando pointed out, “we’d have ten years of history to explain to them, much of it unpleasant, let alone this latest scandal. St. Bride’s men being asked to defend Owens. What is the world coming to?”

When characters stop talking to their author

When I announced that Lessons in Loving thy Murderous Neighbour was up for pre-order, I made the semi-flippant remark, “I'm delighted to announce that Jonty and Orlando have started to talk to their official biographer (me) once more, having been annoyingly silent these past couple of years.” I was immediately asked “Why did they go quiet on you?” Why indeed.

Partly it’s because the Cochranes have had a bit of a dose of “life giving us lemons” over the past three years, so creative thinking time has been at a premium, but that’s not the entire story. I’ve produced three other books in that time (a new Lindenshaw mystery and the two Porthkennack romances) so why didn’t that include a new adventure for the Cambridge boys?

A frivolous answer might be that Orlando had taken offence that I was dallying with my other sleuths, Robin and Adam from the Lindenshaw books. I can quite imagine Orlando taking umbrage that he had to share my time, and – all joking aside – it has felt at times that I only had ears for these other characters. No longer could I hear Jonty Stewart’s distinctive tones wittering in my brain saying, “Did I ever tell you about the time we…”

I had a conversation with my eldest daughter where she expounded some ideas she had for a plot – she’s very good at that – but I said I couldn’t write it as I was working on another story. Trouble was that tale had a terrorist plot as part of it, even though the story itself was quite tongue in cheek, and I got to the point where there were so many terrorist outrages happening that I didn’t have the heart to carry on with the draft. I put it to one side and thought, “What now?” And that’s when I remembered the plot conversation and “Voila!” Jonty started wittering again.

And do you know what? I felt like the father of the prodigal son must have, when he saw his nipper legging it towards the house. Or perhaps I felt a bit like the son himself because there was a real sense of coming home. I never have to force the Cambridge Fellows words to come; I sit down and they flow, just as if the lads really are dictating to me.

Because Charlie Cochrane couldn't be trusted to do any of her jobs of choice—like managing a rugby team—she writes. Her mystery novels include the Edwardian era Cambridge Fellows series, and the contemporary Lindenshaw Mysteries. Multi-published, she has titles with Carina, Riptide, Lethe and Bold Strokes, among others.

Comment below for the chance to win an audio copy of Lessons in Love. One winner to be drawn from total comments from all blog tour stops.