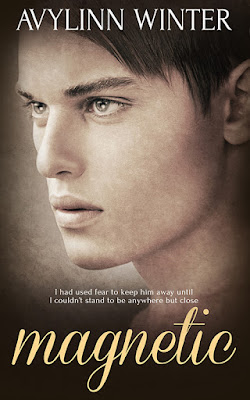 He’d been afraid of me, and I had used fear to keep him away until I couldn’t stand to be anywhere but close.

Dante Heron has lived a life surrounded by pointless affection and impossible demands. Driven to the brink by his parents in pursuit of fame and fortune, he has learned to circumvent anything that would force him to feel more than he can stand. Until Chris. But then, he drove away Chris just as surely as he’d chased off everyone else.

Lost and afraid of the truth of that rejection, Dante pines from afar—more used to suffering than facing his problems. However, his feelings continue to torment him and no matter how many times he wants to leave the past behind, it won’t let go.

Publisher's Note: Magnetic is a companion book to the Treacherous Chemistry series and should be read after Volatile to appreciate the story.

The spotlight nailed me to the parquet, blinding as I faced an audience I couldn’t see. Drops of sweat ran in rivulets down the nape of my neck, caught by the white starch collar before they could travel farther. The steadfast rhythm from the orchestra pulsed through my blood, holding me grounded while my fingers pressed against the harsh strings of my violin, moving from place to place in a dance my mind barely followed. I simply played, pouring out every last shred of emotion I had from the bottom of my core. Emptying myself of everything.

As always, I was close to losing control. One slip, one finger misplaced, and the night would be ruined.

I could hear Mother’s voice in the back of my mind. Don’t fail us. We have sacrificed so much for you. I opened my eyes and saw her sitting on the front row, a frown on her forehead. Father sat beside her, clasping her hand as if to soothe her annoyance. They were never content, never proud. I wondered if they ever would be.

The cello section initiated the final build-up, stroking their strings with utmost care. I banished Mother from my thoughts, letting myself be swept away, carried in the moment. I had to succeed—and I would. The beast was mine to temper, reined in with the tips of my fingers.


You can do it. This time it was Chris’ voice, gentle and reassuring. Inhaling a rugged breath, I almost lost my focus. I couldn’t think about him. Not now.

The conductor moved the orchestra into the last part of my solo and I followed, clinging to the sounds beneath my bow. It was a desperate chase to the finish—a chase that had been thrilling in the past, but everything had changed since Chris had left after those disastrous days in Athens. I had been so angry. I’d felt betrayed and abandoned with emotions I hadn’t been able to handle.

Pushing myself to the limit, I held on until the audience broke out in applause. It was a tame response, not the wild cheers from a delirious crowd.

At any other time, it would have been mortifying. My stomach would have dropped and my heart would have thumped loud and scared. But I couldn’t feel a thing once the music had ceased. I was already numb.

“You have got to take this seriously, Dante,” Mother snapped as she caught me off-stage. Lara, my sponsor or manager, or whatever it was she called herself these days, trailed behind and winced at my dear mother’s tone.

“I am,” I replied, even if I knew it was far from the truth. I didn’t care anymore.

“I heard you miss several notes. Do not disappoint us like that again.”

“I won’t.” It was an automated response, designed to avoid conflict.

“I know you’re still sulking about that boy, but don’t you understand now why I told you to get a grip of yourself?” She folded her arms across her chest. “He’s meant nothing but trouble and he would have ruined your career.”

Mother pursed her upper lip but said nothing. She knew it was foolish to cause a scene while the members of the orchestra still lingered around us. Keeping up appearances was everything to her. Producing a loud huff, she took my arm and steered me through the narrow corridor, aiming for my private dressing room. Not for the first time, I wished it was truly private and not a room where Mother, Father and Lara could enter at will.

After finding out about Chris, my parents hadn’t let me out of their sight. It hadn’t mattered how many times I’d asked them to go home. They’d refused, bringing up painful memories of what I had lost. Lara had tried to persuade them to leave me alone, but even she balked when it came to my parents. I resented her for it, almost wanting her gone, as well, but she still made herself useful by cushioning their attacks.

I was old enough to shut the door in their faces if necessary, but some part of me still wanted their approval, an approval I’d never gained as a child.

Lara opened the tall door, letting us inside the dimly lit room. Scattered candles gave it a muted glow but there was nothing warm about the atmosphere. Rooms like these evoked unpleasant memories, at least if I discounted those moments spent with Chris.

I clenched my fingers around the fragile neck of the Stradivarius. I had to move on. It had been Chris’ choice to leave—even Lara had said so. In my desperation to save him from my parents’ wrath, I had pushed him too far away from me, and now he was gone. Swept away like dust in a harsh wind.

I was the wind, and it pained me. I was poison, destroying everything in my path, something he should have known from the start.

The door shut with a loud bang behind me.

“You know we do this because we love you,” Mother said, her voice laced with forced maternal care. She excelled at the act, but I knew better. It had taken years to understand that she only said these things to pull the strings even tighter around me, and when Chris had opened my eyes to real love, I had finally thought that I could break free. But he’d left and she remained.

“You don’t do it because you love me,” I replied, strengthened by Chris even if he wasn’t around. It came out of nowhere, pushed forward with rush of adrenaline.

“What did you say?” Her tone screeched and bellowed at my conscience.

I turned toward her, meeting her harsh glare. “I said that you don’t do it because you love me.”

“How dare you!” She shook with anger, her face pinched into a sneer. The carefully crafted mask of makeup cracked at the edges and she raised her arm as if to slap me. She had done it before. Many times. Red marks left by harsh fingers, bruises around my wrists where she’d held me. Years of living in fear of unjust discipline.

Breathing deep, I straightened my shoulders and stared her down, daring her to take that last step. She lowered her arm, perhaps realizing that in a physical fight she didn’t stand a chance against a grown man. I had never done anything in retaliation, but maybe she understood that this time would be different.

I was sick of her. I was sick of Father. I was sick of them ruining the small scraps of happiness I felt while playing the instrument I loved. It was the same every time—they would point out the mistakes, always saying that I should have played better. However, they’d never been able to take my passion away, no matter how hard they pushed me. It was the only reason I’d managed to keep playing. I had learned to accept their anger and disappointment. I had even learned to expect it, but their disapproval had ultimately taken Chris from me and that was a different story altogether. I should have been stronger. I should have stood my ground to keep Chris by my side when they’d flown all the way to Athens simply to break us apart.

“Be glad that we’ve supported you all these years. You would be nothing without us.” She waved me off, approaching the side table to pour herself a glass of chilled champagne. Even angered, she would only drink one serving—too controlled to loosen up.

Lara gave me the smallest of nods, almost imperceptible to avoid Mother’s detection. She knew how hard this was for me, and more than anyone else, she wished that I would break free from my parents. In many ways I already had. When Lara had taken me in as a fragile thirteen-year-old boy to nurture my talent, my life had changed for the better. But she’d never had the power to protect me completely. My parents were always around in one way or another. Their words echoed across oceans.

I wiped off my instrument, handling the beauty with the reverence it deserved. It was the only relationship in my life that still worked, but a violin didn’t keep me warm at night. That role had been given to endless girls, but the vicious cycle of dead affection had dragged me down even further. I hadn’t noticed until Chris had entered my life and changed everything.

The reflection of a candle flame glimmered on the dark screen of my phone which stared at me from the table as if urging me to pick it up. I wanted nothing more than to call him, but it had been weeks and the more time that passed, the harder it became.

The first time I’d dared to call, desperate to hear his voice, Mother had entered the room, staring at me while Chris had uttered my name as if he’d been waiting for my call but had feared it at the same time. I hadn’t been able to say anything and her presence had reminded me of why I should just let it be. It was useless to stir up emotions when nothing would come out of it.

Raised in one of the cold corners of the world, Avylinn spends her days either wrapped up in a blanket or basking in the precious sunlight. When she can’t choose herself, she’s holed up in an office working with climate research that has little to do with the worlds and characters she creates in her vivid dreams.

Always the emotional one, she has found her outlet in writing, voicing thoughts, emotions and fears through her characters that feel very much alive to her. And, what began as a hobby soon took more and more time in her life until she realized that she had left her old life behind and entered a new one where her emotions turned into a super power—ready to launch at her poor readers.

She recharges with the help of coffee, cinnamon buns, popcorn and occasionally a healthier alternative.