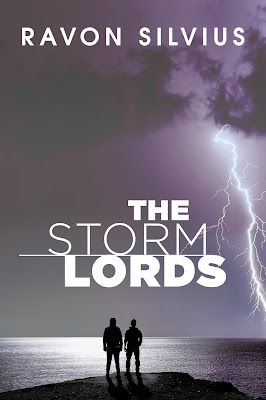 The heat took everything from Rowen: his parents, his voice when the local cure for heatstroke poisoned him, and the trust of his fellow villagers, who branded him a water thief. It would have claimed his life when he was deemed unworthy of precious resources and left in the sun to die, had not a strange man named Kristoff ridden in on the wind and told Rowen he had power.

Rowen works hard to become a Storm Lord, one of a secret magical group that brings storms to break the heat waves overtaking their world. But Rowen is starting his training at a disadvantage since he cannot speak and is much older than the other novices. The desire to please Kristoff inspires him to persevere even more than the threat of being sent back to his village to die should he fail. Still, he cannot gather rain, and when his abilities manifest, they are unlike anything known to the Storm Lords. Unless Kristoff can help him control his deadly powers, the entire world will be in danger.

Kristoff might be among the mightiest of the Storm Lords, but he’s never been a mentor before. For a chance to be with Rowen, he’s willing to risk everything.


“Tie him up!”
“This is not the way!” Alain shouted. “There are no Storm Gods!”
“It’s this or death, Elder, isn’t it?” Timothy said. “There’s too little water left. He deserves it anyway, after his parents. Water stealers can’t be trusted. The Brush Goddess cursed him for it.”
Rowen tried to shout, to scream. But his voice didn’t work, hadn’t worked since that day, and no one could hear him. Grabbing hands from people with angry faces stripped his clothes off, binding his ankles with cord and forcing his wrists behind his back. He strained against the ropes, the fibers cutting into his skin, but weeks with little water and food had already taken their toll.
No one used any more force than they had to, but the strong grip on his shoulders, arms, and legs, of everyone in his village arrayed against him, showed Rowen how pointless it was to fight. He could barely even stand, his legs bound together and his hands behind his back.
Andrew stepped up to him, staring into his face with unseeing eyes. Andrew had once given his mother his most beautifully forged metal bucket to store water and had joked with his father about sleeping underground while he dug wells.
Andrew pushed him, and Rowen fell into the dust.
“Leave him in the sun,” the man from the north said. “One less to take your water, and one more death to bring the storms faster.”
Hot tears formed in Rowen’s eyes, but he was too old to let himself cry. He hadn’t wanted their water anyway.
They dragged him into the sun, and the ground underneath him burned. He shut his eyes tightly, and the sun baked him. Nobody stayed, the coolness of their shadows dispersing. They had their dead to bury.
Rowen knew that his own death would come quickly.
The sweating began first, and his head swam in the heat. He didn’t dare open his eyes to see the merciless sun beating down on him. His skin was pale, and if he lasted long enough, he would be covered in blisters. He hoped he passed out before the pain got too bad.
He tried to think of his parents as the sun moved across the sky, focusing on memories rather than the pain of his skin burning, the heavy weight of the heat beating down on him, and his body’s desperate craving for water. He had been close with them, as an only child. His father had introduced him to village girls and had not shown disappointment when Rowen had confessed to feeling nothing for any of them. He had said only to be careful.
He thought of Lucas. Lucas, the blacksmith’s apprentice, a boy his age with blond hair and an eager smile, full lips and bright blue eyes. Rowen had never told him how Lucas had made him feel, quickening his blood and stirring him in his dreams.
Lucas had died in the same heat spell that had killed his parents. Since then Rowen had felt nothing. Too much loss all at once. He groaned on the heated ground, but it was silent, and no one was there to have heard it even if he could make a sound.
He had survived that heat spell. It should have killed him like it killed his parents, but he had lived, eating pit seeds that silenced him forever and leaving him mute to defend himself to the villagers when they claimed he stole his parents’ water. The Brush Goddess had cursed him for no reason. Or maybe there was no Brush Goddess.
A wave of nausea flipped his stomach. Heat sickness was setting in. He rolled over to vomit, nothing coming up but whitish bile. Rolling made him dizzy, and that made the sickness worse.
Soon, nothing came up at all. Heat surged through him, but he could no longer sweat. The ground spun.
This was fitting. He couldn’t survive again. He had struggled to live alone for the past year, a ghost no one wanted in their village.
He opened his eyes and was greeted with darkness.
Night had not come. He rolled, impossibly slow, to look up. The sun had been covered, a thick, dark cloud blanketing the village.
The skin around his mouth burned and flaked as he smiled. He had been sacrificed, and the storm had come.

The writing process for The Storm Lords

Greetings everyone, and thanks for hosting me on the Fiction Nook to talk about The Storm Lords, my latest release!

Today, I want to talk about the process of writing the book. Each author has a different writing process, and each one is a bit unique. They can even be unique for one author for different books! The Storm Lords was tough for me to write, for a few reasons.


The Storm Lords began as an idea after a heat wave, in a tiny apartment with no air conditioning. I wrote the opening scene, which you can read below, very quickly after getting the idea. A man burning in the desert sun, saved by a man who can bring rain, the only sound a storm in the background. That image stuck with me, and it also, I think, influenced me to realize that Rowen, the MC, was mute. He cannot speak, but images say much more.

But after writing that first scene, I stopped for a while. I had the basic idea in my mind of how I wanted it to go, but every author, I think, goes through a stage of talking about the idea with others and hammering out any problems that might come up. I'm not one to write long outlines or anything like that, but I do like to have a fleshed out world in my mind. Of course, I came up with even more detail than ended up getting used. The regions of the world we explore in the book are the Storm Lords Island and Rowen's small village, but there is a lot of history and geography in the book that could have been visited! Of course, I wanted to focus the story on Rowen, his struggles, and on Kristoff, so all of that will have to wait for another time.

After what I like to call the "planning period," I wrote a bit more--and then stopped again due to life events, one of the reasons writing this book was harder. I know, how annoying. In going to graduate school, I ended up moving out of one tiny apartment into another, and I ended up getting even more ideas for books that were shorter and could be released faster. So I took a little break from the Storm Lords.

But Rowen's story kept pestering me, and I never shelve anything permanently. I felt it needed to be told. Not only was it harder to write time-wise due to so much grad school work piling up at the time, it was harder to write craft-wise because Rowen couldn't speak. I consider one of my writing strengths to be dialogue--I'm not one for using a ton of description, and as soon as I hit dialogue, a scene flows much more easily for me. Not being able to do that for Rowen was hard. But I wasn't going to give up on Rowen, and I certainly wasn't going to take the easy way out and suddenly cure him, either.

I channeled some of my own experiences into Rowen, I think, giving rise to the book you'll read. The feeling of uncertainty he has, the impostor syndrome, is something I felt in grad school, and is something a lot of people feel. His homesickness warring with his desire to move on and improve his life is also something I think many can relate to. Every time we move, and every time I moved, from that sweaty apartment to a nicer place, I thought of Rowen and how it must feel to be moving up and forward while the past is always there. Everyone, I think, wants that one place they can call home, but things always change, and you have to be able to adapt. And sometimes, like at the end of the book, the changes turn out better than you could have imagined.

Its always a great feeling to finish writing a book--another thing to have accomplished. I hope those who read it get as much or more enjoyment out of it than I did writing!

Ravon Silvius lives in a tiny apartment with two tiny cats in a tiny town in the United States. Despite the cramped living quarters, Ravon enjoys coming up with big ideas for novels, with some plots coming from Ravon's findings as a neuroscience researcher and others coming purely from Ravon's imagination.