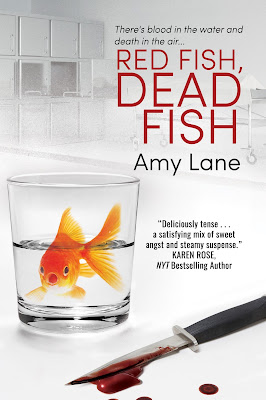 They must work together to stop a psychopath—and save each other.

Previous book in the series 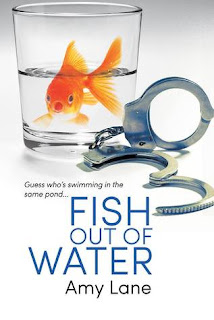 
Defense attorney Ellery Cramer grew up with the proverbial silver spoon in his mouth, but that hasn’t stopped him from crushing on street-smart, swaggering Jackson Rivers for the past six years. But when Jackson asks for his help defending Kaden Cameron, Ellery is out of his depth—and not just with guarded, prickly Jackson. Kaden wasn’t just framed, he was framed by crooked cops, and the conspiracy goes higher than Ellery dares reach—and deep into Jackson’s troubled past.


Both men are soon enmeshed in the mystery of who killed the cop in the minimart, and engaged in a race against time to clear Kaden’s name. But when the mystery is solved and the bullets stop flying, they’ll have to deal with their personal complications… and an attraction that’s spiraled out of control.

Okay folks—so, I’m here today to promote Red Fish, Dead Fish, my latest story in the Fish Out of Water series.  Now, usually in a blog tour, we talk about ourselves and our newest book until we can’t hardly stand it—but this time out I decided to do something different. I’m going to talk about other people’s books—because I know some amazing romantic suspense authors, and I wanted to celebrate them instead.

So Red Fish, Dead Fish is out on Amazon, it’s the second in the series, and I think you’ll like it very much a lot! That being said, let’s talk about Rayna Vause!

Rayna Vause is multi-talented in the extreme. She writes romance books, she attends med school, she has degrees in things like computer science and she even runs the occasional conference.

She’s also funny as hell, warm, personable, compassionate, and she’s got a soft spot for her kittehs that rivals my own soft spot for my dogs.

And she’s a damned fine writer.

Her specialty is romance with just a touch of something extra—the paranormal, a mystery—not enough to lose Rayna’s firm grounding in real details, but just a little something extra to make the character’s lives more exciting. I think you guys will enjoy dipping your toes into Rayna’s exciting and extraordinary worlds!

What do you think is the most delicious part of a suspense novel or a mystery?


Maybe it's an obvious answer but my favorite part of a romantic suspense
is the climax. In particular when one character's life is hanging in the
balance. I'm a sucker for a good high drama scene where one character
isn't sure if the other main character is going to survive. I don't just
mean are they going to catch the bad guy in time. I mean the scene where
the confrontation with the villain has happened and one of the main
characters has a potentially fatal injury. It then becomes a  race against
time to get them to help or the character's prognosis doesn't look great
as they're being wheeled into the operating room. If you're writing
romantic suspense we all know the injured character will pull through, but
I just love the high emotion of the scene. I've never written that scene
myself, but it's fun to read.

Tell me about body counts--seriously. How many corpses make a good suspense novel, and why?

I don't tend to have a body count in my books. I find that find my stories
don't tend to lend themselves to high body counts. Or, any body count at
all for that matter.  Since I tend to do paranormal with romantic suspense
mixed in, I feel like I've got enough going on plot wise that multiple
bodies aren't needed and would pull the focus. I guess maybe my villains
are very goal oriented and like putting their all into instilling fear
into the main characters.

What's your most creative way to kill someone?

Hmmm...I think the most creative way I've come up with to kill someone was
tampering with their saline drip while they were in the hospital. I never
actually used this in one of my books, because like I said I don't tend to
kill people off. I came up with it while brainstorming with a fellow
writer who ultimately used it in  her books. I thought it was quite a
clever little solution to the problem of how to kill someone in a
hospital. My medical training really does come in handy from time to time.

For more interviews and author close ups for Romantic Suspense, check out the rest of the blog tour

Amy Lane dodges an EDJ, mothers four children, and writes the occasional book. She, her brood, and her beloved mate, Mack, live in a crumbling mortgage in Citrus Heights, California, which is riddled with spiders, cats, and more than its share of fancy and weirdness. Feel free to visit her at her website or her blog, where she will ride the buzz of receiving your e-mail until her head swells and she can no longer leave the house.