Howdy y'all. I'm Don Allmon and I got a debut book name of The Glamour Thieves. It’s the first of a three book series called The Blue Unicorn. It's a grim kind of fantasy, a cybernetic near-dystopia, a rough-edged romance with few promises except for the ones that matter. Ain't nothin' worth earnin' that wasn't hard won. Join in on the comments and win yourself some loot. 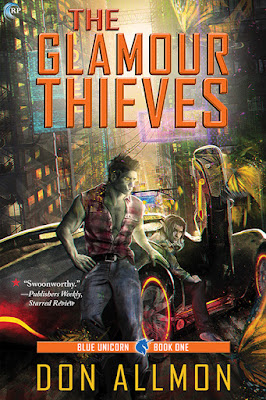 Soon JT’s up to his tusks in trouble, and it ain’t just zombies and Chinese triads threatening to tear his new life apart. Austin wants a second chance with JT—this time as more than just a friend—and even the Blue Unicorn is trying to play matchmaker.

In his night job, Don Allmon writes science fiction, fantasy, and romance. In his day job, he’s an IT drone. He holds a master of arts in English literature from the University of Kansas and wrote his thesis on the influence of royal hunting culture on medieval werewolf stories. He’s a fan of role-playing games, both video and tabletop. He has lived all over from New York to San Francisco, but currently lives on the prairies of Kansas with many animals.


To celebrate the release of The Glamour Thieves, one lucky winner will receive a $20 Riptide gift card! Leave a comment with your contact info to enter the contest. Entries close at midnight, Eastern time, on September 2, 2017. Contest is NOT restricted to U.S. entries. Thanks for following the tour, and don’t forget to leave your contact info!