Thanks for hosting me today as part of my blog tour for Comes a Horseman, the 3rd and final book in my WWII Echoes Rising series from DSP Publications.

This month is the anniversary of the atomic bombs dropping on Japan during WWII. Hiroshima was bombed on the 6th August 1944 and Nagasaki three days later on the 9th.

As my last book in a series in part inspired by those events came out the week before, it reminds me of one of the reasons I write historical fiction.  I’m a firm believer in the saying that those who do not remember history are doomed to repeat it, and sadly looking at the world at the moment I sometimes wonder if we’ve learnt much at all from the lessons of the past.

At the beginning of Echoes Rising Dr. Kristopher Lehrer is a scientist working for the German atomic bomb project.  He’s more than a little naive in thinking that his research will be used for the benefit of mankind, and shocked when he realises that’s not the case. It doesn’t take too long before he—and Michel, a Resistance fighter who has been watching him—are on the run with the formulae needed to complete the project.

I read a lot about the history of the atomic bomb when I was researching this story, and it wasn’t pleasant reading.  War rarely is.  One of the other reasons that I enjoy reading and writing historical fiction is that it’s an opportunity to explore human nature, and the fact that war brings out the best and worse in people.

What started out as a story of a man following his conscience, and determined to give his findings to the Allies soon began to follow another path.  As Kristopher sees and hears about what both sides are capable of as part of their fight to win, he comes to conclusion that no one should have the power that the information he carries will give. Sadly it’s often civilians who play the price when such weapons are used, something which hits home when he is caught at ground zero during the Allied bombings of Germany. Although history will play out, and the bombs will still be dropped—although of course he doesn’t know that—his reasoning is that if they are at least they didn’t get the information needed from him. Despite that, I doubt he will ever lose the nightmares that come from knowing his role in the project.

The Allied team who come together to get Kristopher—and the information he carries—out of Germany are a mix of nationalities.  Ken, being part Japanese, knows all too well about the internment camps in which people of Japanese descent were sent during this time. His mother is in one, and he takes his father’s surname to avoid her fate. On the flip side, Liang is British Chinese and he lost family during the Nanking massacre in 1937.  They’re all aware of what people are capable of.

But the team also has a mission to complete, and both sides will not give up hunting for Kristopher until they are convinced he is no longer a threat, or an ally.  And in Normandy, just before the events of D-Day that’s going to be problem...

With Comes a Horseman being the final book in the series, I also wanted to remember those who had sacrificed themselves, and lost their lives before and during the events of this story.  The friends and family these men have lost weigh heavily on their minds. Too many lost their lives during the war, either fighting for their beliefs, or as innocents caught up in it.  This story is dedicated to them, and the poppy on the cover is a visual reminder.  We can’t change the events of the past, but neither should we forget them. 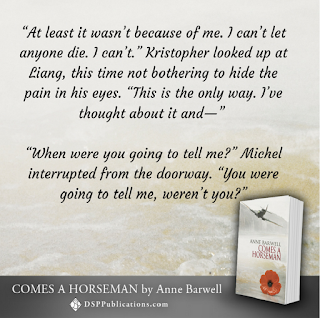 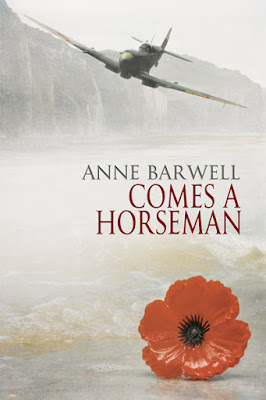 Sometimes the most desperate struggles take place far from the battlefield, and what happens in secret can change the course of history.

Victory is close at hand, but freedom remains frustratingly just beyond the grasp of German physicist Dr. Kristopher Lehrer, Resistance fighter Michel, and the remaining members of the team sent by the Allies—Captain Matt Bryant, Sergeant Ken Lowe, and Dr. Zhou Liang—as they fight to keep the atomic plans from the Nazis. The team reaches France and connects with members of Michel’s French Resistance cell in Normandy. Allied troops are poised to liberate France, and rescue is supposedly at hand. However, Kristopher is no longer sure the information he carries in his memory is safe with either side.

When Standartenführer Holm and his men finally catch up with their prey, the team is left with few options as they fight to keep atomic plans from the Nazis. With a traitor in their midst, who can they trust? Kristopher realizes he must become something he is not in order to save the man he loves. Death is biding his time, and sacrifices must be made for any of them to have the futures they want.


“He’s late.” Matt glanced toward the door again. Although he was trying to appear nonchalant, hiding his nervousness was growing more difficult.

Their journey to Gernsbach had gone too smoothly, and that made him edgy as hell. After one night there, he’d suggested they keep moving for a couple more hours until they reached Bischweier. He’d been to Bischweier years ago when he’d lived in Germany before the war. The local priest was an old friend of Father Joseph’s, the man who had run the orphanage where Matt had grown up in Pennsylvania after he’d lost his family in a fire.

“Not that late.” Michel shrugged. “If we’re not back by two, Ken knows not to stay in Bischweier.”

Michel and Matt had gone ahead to Rastatt to meet their contact in the back room of a local Kaffeehaus. The owner—a member of the local Resistance—had been kind enough to leave them some coffee to drink while they waited.

“They should be safe if they stay in the chapel,” Matt said. He hadn’t been surprised to learn that Father Markus was working with the Resistance. He was a good man, and Father Joseph had spoken highly of him.

“You didn’t trust our contact in Gernsbach,” Michel said. “Why?”

Now they were finally heading toward home, he kept expecting Holm or one of his men to turn up. Standartenführer Holm wouldn’t give up easily, and Matt doubted he would have spent all this time looking in the wrong direction. The last few weeks had gone too smoothly, reminding Matt of the way a cat played with a mouse, waiting until the right time to finally pounce.

“Holm is not going to give up until he’s captured his prey,” Michel said. “It’s better that both Kristopher and Ken stay away until we are sure it is safe here.” He offered Matt a cigarette, but Matt declined.

“Kristopher is the one Holm is after,” he said cautiously.

“Officially, yes.” Michel lit his cigarette and took a long puff of it. He wasn’t usually very forthcoming with information, and this was the first time he’d implied he knew about Ken’s history with Holm.

At least to Matt.

“What has Ken told you?” Matt asked. Until they’d met up again in Freiburg, he’d only met Michel briefly in Berlin. He still knew Kristopher better, as he was not as reticent. Matt had gotten the impression Michel didn’t have much time for social niceties. He was pleasant enough, though, and it was obvious as hell he cared a great deal for Kristopher.

“We spoke briefly in Stuttgart.” Michel shrugged. “Holm is a dangerous man, and once he has made up his mind to achieve something, he doesn’t let anyone or anything get in his way.
Do not be fooled by his manner. He’s the type who would shake your hand while putting a knife in your back.”

“I’m well aware of Holm’s less than charming nature, thanks all the same,” Matt said. His meeting with Holm was not one Matt would forget in a hurry, if ever. Nor would he forgive him for killing Elise. “He’s a cold-blooded murderer.”

“That’s a polite way of putting it.” Michel narrowed his eyes and swore under his breath.

Although Matt’s French wasn’t that good, he knew enough to appreciate the sentiment.

“I believe Ken was foolish enough to promise not to harm him,” Michel continued in German. “I take it you have no problem in doing whatever needs to be done?”

“No problem at all,” Matt said grimly. 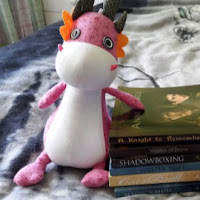 She is an avid reader across a wide range of genres and a watcher of far too many TV series and movies, although it can be argued that there is no such thing as "too many." These, of course, are best enjoyed with a decent cup of tea and further the continuing argument that the concept of "spare time" is really just a myth. She also hosts other authors, reviews for the GLBTQ Historical Site “Our Story” and Top2Bottom Reviews, and writes monthly blog posts for Authors Speak and Love Bytes.