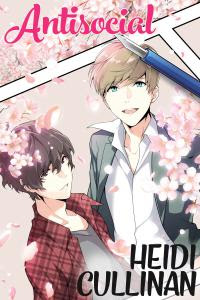 A single stroke can change your world.

Xander Fairchild can’t stand people in general and frat boys in particular, so when he’s forced to spend his summer working on his senior project with Skylar Stone, a silver-tongued Delta Sig with a trust fund who wants to make Xander over into a shiny new image, Xander is determined to resist. He came to idyllic, Japanese culture-soaked Benten College to hide and make manga, not to be transformed into a corporate clone in the eleventh hour.

Skylar’s life has been laid out for him since before he was born, but all it takes is one look at Xander’s artwork, and the veneer around him begins to crack. Xander himself does plenty of damage too. There’s something about the antisocial artist’s refusal to yield that forces Skylar to acknowledge how much his own orchestrated future is killing him slowly…as is the truth about his gray-spectrum sexuality, which he hasn’t dared to speak aloud, even to himself.

Through a summer of art and friendship, Xander and Skylar learn more about each other, themselves, and their feelings for one another. But as their senior year begins, they must decide if they will part ways and return to the dull futures they had planned, or if they will take a risk and leap into a brightly colored future—together.

The painting, three by four feet and propped on an easel in the center of the room, arrested Skylar Stone, emptying every thought from his head, save one. This piece of art was the most incredible thing he’d ever seen.
He paced a semicircle around the canvas, unconsciously hooking his index finger into his collar to loosen his tie, as if looking at this painting required more room to breathe. It assaulted his senses and made him too dizzy to think. How did it possess so many colors and yet seem kind of purply blue? There was gold in there, somehow, and red, and…God, everything. What was the figure in the foreground? A man? A dog? A boulder? Somehow it was all three. A hulking mass of darkness looking out at…stars. Or perhaps it was someone lying on a blanket. Or it was a gargoyle looking over a city. A city on fire.
Or maybe it was a city being formed?
It looked like a child had painted it. Or a grand master. It took Skylar’s breath away.
“I said, can I help you?”
Blinking, Skylar turned toward the speaker, a mousy, scrawny, hunched male student with a permanent glower stitched on his face. He wore a dark-blue apron stained with paint, several brushes sticking out of the right-side pocket. The plaid shirt the apron protected was frayed at the collar and cuffs, and it fit the man so poorly it looked like he’d dressed in his father’s closet. His jeans were equally worn, and his tennis shoes sported soles flopping open at the toes.
The man glared at Skylar with dark-brown eyes peering from a shag of slightly curly, too-long bangs as he waited for Skylar’s reply.
Skylar cleared his throat and struggled to find his usual confidence, feeling clearer with the artwork out of a direct line of sight. “Sorry. That painting is so gorgeous it knocked me off my game a little.” Digging his smile out of his stupor, he crawled back into what his fraternity brothers called Silver Stone Mode and stuck out his hand. “Skylar Stone. I’m the risk manager for Delta Eta Sigma. I’m looking for Mr. Xander Fairchild. Can you tell me where I might find him?”
The mousy guy didn’t accept the handshake, and if anything, his scowl deepened. “What do you mean, the painting is gorgeous?”
Skylar turned back to it, rubbing the smooth line of his chin with his thumb and forefinger. “I mean that the painting is gorgeous. I feel like I could look at it for hours.”
“The paint is too thick, and the brushstrokes are a mess.”
“That’s kind of what I like, though. The thickness. The roughness. It feels almost 3-D. I don’t know anything about art, so I wouldn’t know a brushstroke if you hit me with it, but I love this painting. Do you know who did it?”
Scowling Guy snorted. “Me.”
“Wow. Really? That’s fantastic. I can see someday I’ll be forking over an arm and a leg for the right to hang your work in my living room.”
The artist hunched his shoulders and glared harder. “What do you want?”

Right, no more compliments. Skylar got down to business. “Like I said, I’m here to see Mr. Fairchild. Do you know where I can find him?”
“You already did. Now tell me what you want, so I can tell you no and get back to work.”
“You mean—you’re Xander Fairchild?”
“Yes. And you’re one of the frat boys who spray-painted penises all over my mural.”

Thanks so much for having me here today!
In my upcoming novel Antisocial, the characters use the Asian blood type personality theory to identify themselves, much the same way we use astrological signs or even Myers-Briggs. Most westerners don’t know anything at all about using blood type to determine personality, but in Asia, Japan in particular, it would be considered shocking to not know one’s blood type, and while not everyone subscribes to the blood type personality theory, it is widely applied.
There are two origin stories for the blood type personality theory. First begins with stereotypes from Europe around the time of World War II, a belief that Europeans were were superior to Asians based on blood type. Takeji Furukawa undertook social science research—which many scientists dispute the means of its collection, for full disclosure—and developed profiles for the four main blood types (A, B, O, and AB) and the personalities of those who carry them.
In the 1970s, journalist Masahiko Nomi advanced Furukawa’s bloody type theory and helped launch it into the public psyche. While officially it is frowned upon as a means of use, it is frequently employed to profile employees, students being considered for schools, prospective dates, even friends. It’s a bit of a sobering concept, as no one can change their blood type, and some of the things these profiles are used for are serious—and the science is truly vague at best. It’s fine for a parlor game, but a bit of a thing to think it might be keeping someone out of a job or an education!
In any event, if you know your blood type and would like to play along, here’s the blood type theory laid out.

Blood type A
Most of Japan is blood type A. People with this blood type are well-organized, stubborn, and value social harmony. They tend to stress but are always working for ease and unity, and they’re not doing it loudly. Farmers and office workers are the blood type A. They’re reliable, neat, sensitive, shy, can be intense, perfectionist, kind.

Blood type B
Blood type B is the creative blood type, but they’re also known to be selfish, loud, passionate, unconventional, unpredictable. They’re curious, which helps with their creativity, but their adventurous spirit often gets them into trouble. They can be irresponsible and even mean. But they can be strong too, and their wild spirit can be the surprising element that changes everything.

Blood type O is calm, cautious, and resilient. They don’t freak out in the way type A does, and they don’t upset the apple cart the way type B does. They can be emotional, and they can still shake things up, but they have a more even keel. They’re independent, and they can tip easily into vanity, even rudeness, but they’re at heart romantic and social. They make great leaders.

Blood type AB
This is the rarest blood type in the world, and as such it’s the most difficult personality to profile. AB’s are seen as eccentric, a hybrid of A and B blood, but the adjectives used for them are a bit of a mess. They’re shy, they’re outgoing. They’re aloof but they’re sociable. Trustworthy but two-faced. They’re artistic, critical, popular, spiritual, adaptable—it’s a word salad, really.
As it happens, like Skylar in Antisocial, I am also blood type AB.

The funny thing about blood type theory is that it seems, somehow, to work. My husband is type A and he really, really is type A. The blood type AB descriptions are always a mess, and yet they make sense in their own way. I always shift around. I am both things depending on the day, and I’ve always felt like I could fold in on myself and shift around. I definitely have two faces, and yet I work hard to seem as if I have one. I really considered not telling anyone my blood type at all. In the Yuri on Ice fandom, Victor Nikiforov famously won’t tell his blood type, and I bet you a million dollars he’s AB.

Like all personality systems, the blood type theory is useful in helping us see and understand ourselves, to give us windows through which to view one another. What’s your blood type? Do you think it matches your personality?

Heidi Cullinan has always enjoyed a good love story, provided it has a happy ending. Proud to be from the first Midwestern state with full marriage equality, Heidi is a vocal advocate for LGBT rights. She writes positive-outcome romances for LGBT characters struggling against insurmountable odds because she believes there’s no such thing as too much happy ever after. When Heidi isn't writing, she enjoys playing with new recipes, reading romance and manga, playing with her cats, and watching too much anime. Find out more about Heidi at heidicullinan.com.