Welcome to our 2nd week of celebrations for the fabulous

In this week's post, we're going to take a look at the L'Ange series. We also have five little-known facts about Mary, plus another chance to win one of her books! 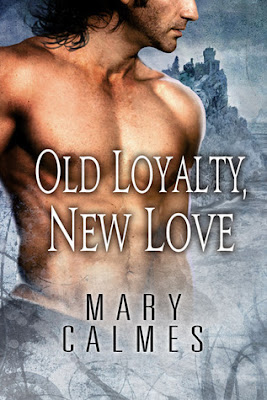 When jackal shifter Quade Danas was banished from his pack for being gay, he spent years in the military escaping his father's prejudice before returning to civilian life as a bodyguard for Roman Howell, the teenage son of a very rich man. After Roman is in an accident that leaves him physically scarred and emotionally distant, Quade is the only one who can get through to him. As Roman becomes a man, he realizes what he wants—his bodyguard by his side and in his bed. Unfortunately, Quade can’t seem to see past the kid Roman once was to the man he has become, certain Roman’s feelings are merely misplaced gratitude. But Roman knows a lot more than Quade realizes, and he’s used to persevering, no matter how many impediments life throws his way. He wants the chance to prove to Quade that he’s strong enough for a jackal alpha to call mate.

Despite the decades Quade has been away, and the heartache of his father’s rejection, his inborn loyalty to the pack remains, and his abrupt departure left the jackal shifters without an alpha heir. As a psychopath shifter staking claim as alpha draws Quade back home, and Quade feels compelled to heed the call, he may be forced to make a choice he never anticipated. But doing so means he must leave Roman behind… unless somehow they find a way to make loyalty and love work together.

“Don’t leave me again!” he yelled before he sealed his lips over mine, the kiss rough and grinding. He shoved his tongue into my mouth, catching on my canines in his haste.
The pain made him jolt and shudder, pressing tighter, wanting more.
I grabbed hold of his thighs and lifted him to my waist so he could wrap his long muscular legs around me. He tore his mouth from mine, crying out when I walked him back into a wall.
Realizing how close I was to fucking him right there, I tried to untangle myself from him.
“No,” he howled, scrambling to hold on, clawing at my shirt, clutching at my hair. “Just have me. Do whatever the hell you want.”


I tore open his shirt and heard buttons pinging off cement and the brass-plated railings; I bent my head and bit down hard into his shoulder, piercing his skin with my canines.

Second in the series, Fighting Instinct 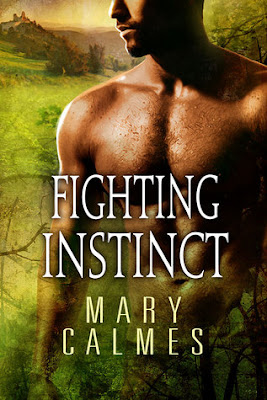 Only a privileged few know L’Ange’s head of security Arman de Soto is a shifter, and even fewer know he’s been systematically killing off a pack of werewolves. The reason for this vengeance is a secret Arman trusts with no one, quite the opposite of his obvious longtime pursuit of the château’s overseer, Linus Hobbes. Despite Arman’s reputation as a loner, the only thing he needs to complete his life is Linus. Predator and prey just don’t mix—but Arman won’t give him up.

Linus has lived alone for more than seven years, sheltered at L’Ange under an assumed name and hiding secrets of his own, including his terrifying attraction to the most dangerous man he’s ever met. Arman knows Linus should be afraid of the predator stalking him, but Linus is still drawn to him like a moth to a flame, no matter how much he tries to deny his instincts. It’s not until Linus’s past and Arman’s crusade exposes their secrets and opens L’Ange to attack that Arman realizes waiting any longer is a risk he just can’t take. So he’ll have to take his quest to the source of the threat in a gamble to protect L’Ange, Linus, and any future they might have together.


“I won’t hurt you,” I whispered before I took his mouth.
His moan was full of surrender, and I held him against me as I deepened the kiss, sucking at his tongue as I circled his waist with one arm and gripped his hair tight with the other.
I had never imagined he could kiss with such urgency and need, as unaffected as he always acted. Linus was not cold; he was smoldering like coals that just needed to be fanned to flame. It was my job to make him so hot that he’d unleash all his pent-up passion on me. I couldn’t imagine anything more exciting than breaking down each and every one of Linus’s defenses and seeing all his glacial reserve melt away.
Pulling back, I stared down into his pale eyes. “I want to kiss you whenever I want.”


“Yes,” he breathed against my throat before he opened his mouth on my skin.

And in the third spot, Chosen Pride 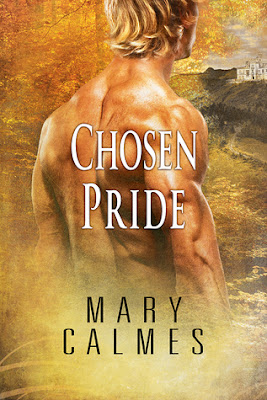 Jon Slade finally met his mate, but instead of it being the happiest day of his life, it became the saddest when wolf shifter Kelvin MacCurdy chose his obligations over their fated bond, leaving Jon to pick up the pieces of his shattered dreams. Lucky for him, Roman Howell, his boss and the owner of L’Ange, saw promise in the forlorn lion and put him to work so he wouldn’t have time to sit around and lick his wounds while he waited for his wounded spirit to heal.

Then the wolves make an official visit to L’Ange, and Jon finds out Kelvin’s pining for him is taking its toll on his position as the king’s champion. Though Kelvin’s training and the expectations of others steer him toward an intended mate, Jon has an unbreakable hold on his heart, and it’s no longer possible for Kelvin to keep himself from where he truly belongs.

But the conclave brings more than Kelvin to the château. It also brings a challenge to jackal alpha Quade Danas, a threat that Quade and Roman, Arman and Linus, and Jon and Kelvin may have to fight in order to keep L’Ange’s family intact. Jon never wanted to lead a pride, but the loyalty and devotion to one is ingrained in him. Kelvin was raised to punish anyone who questioned his king, but the calling to protect others runs through his veins just as deeply. To come out on the other side of the battle together, Jon and Kelvin will have to hold the darkness of solitary pride and broken hearts at bay—and find strength in belonging to something bigger than themselves.

~ one childhood fact not known
I sang in my school choir from Grade 4 through Grade 8. I was an alto and everyone said they could always hear me. My grandmother encouraged me to sing and I adored her so i did.

~ one weird thing you do while writing (maybe you worry about reviews or that edits will come back badly)
While I write, when I stop, I paint my nails. I have many glitter nail polishes (glitter only because you can't tell if it's chipped and it doesn't have to be perfect). You can always tell when I'm on a deadline because the glitter polish is blinding.

~ a sad fact not depressing or cry worthy but just a bit sad
When my daughter was born, my mother and I were barely speaking but in the process of learning to be a mother myself, I realized how much work it takes just to keep another human alive and as a result, I reached out to her. When I thanked her simply for taking care of me, it created a bridge that I will always be thankful for. My mother passed away in 2007 and I still miss her but the important part is that we were in a good place because of my child.

~ one fact about your marriage (make this a happy one we want your fans #goals -ing you not saying 'oh'. cute! like the crepes being made, how did that tradition start? Make it slightly romantic but real)
One of my husband's best qualities is that when I say things, random, vague, off-the-cuff things, out of the blue he will surprise me with the the fact that he's listening. A really good example is Crepe Sunday. Every Sunday morning, my husband gets up and makes me crepes. Sometimes he makes them early, sometimes it's more like brunch, but it all started four months ago when I said how much i love crepes and  that I really wish we could find a good breakfast place that makes them. Well no such luck of course and then out of the blue when I thought he was making me an omelette, I got a crepe instead. Amazing. I asked what brought this on and he said, you mentioned that you liked crepes so I taught myself how to make them. It's pretty nice to still be surprised after 22 years. :)

~ one author that you would fan girl over and just hope to meet one day, and maybe would die if they read your book... but you have to write this in a complete thought not just name an author


One author I would love to meet, and would lose my mind fangirling over, would be Diana Gabaldon. When I lived in Glendale, AZ it was much more likely, since she lives in AZ as well, but she's amazing and she wrote my favorite ever romantic hero, Jamie Fraser. If I ever met and she said, "oh, you're a writer, well, my goodness, do send me a book..." I would probably pass out. Its that level of goddess worship.

Mary Calmes believes in romance, happily ever afters, and the faith it takes for her characters to get there. She bleeds coffee, thinks chocolate should be its own food group, and currently lives in Kentucky with a five-pound furry ninja that protects her from baby birds, spiders and the neighbor’s dogs. To stay up to date on her ponderings and pandemonium (as well as the adventures of the ninja) follow her on Twitter, connect with her on Facebook, and subscribe to her Mary’s Mob newsletter. Lots more info is available on her website.


Thanks for celebrating with us. Come back next week for more of Mary's books, a personal story she's chosen to share, plus another chance to win.